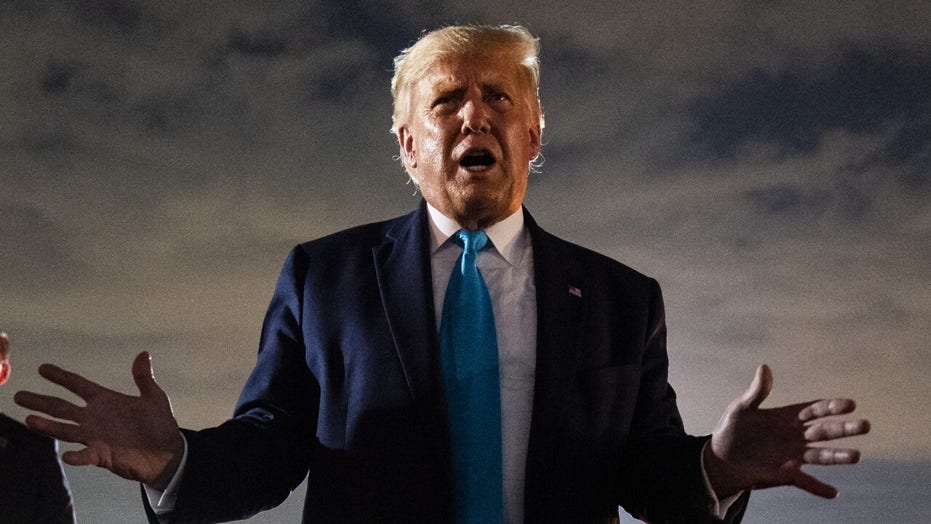 President Trump denies report that he disparaged America’s war dead: They made it up

Trump calls the report in The Atlantic a ‘disgraceful situation’ by a ‘terrible magazine.’

President Trump was labeled a “coward” and lambasted as someone who has “insulted war heroes” on Friday by three top military veteran surrogates for Democratic presidential nominee Joe Biden’s campaign.

Their comments came as they spotlighted a report from The Atlantic that the president criticized U.S. service members on numerous occasions, referred to American war dead as “losers” and asked that disabled veterans be excluded from military parades.

The president, the White House and Trump’s reelection campaign have all vigorously denied the allegations. These cover claims from four unnamed sources that the president disparaged fallen soldiers buried at the Aisne-Marne American cemetery near Paris as "suckers" and said the land was "filled with losers" back in 2018, in addition to trashing Republican Sen. John McCain of Arizona, following the death of the war hero and 2008 GOP presidential nominee.

Democratic Sen. Tammy Duckworth of Illinois – an Army pilot a veteran who lost her legs in combat in a helicopter crash in the Iraq War – said Friday that Trump has “insulted war heroes, he’s attacked Gold Star families and he’s even tried to politicize and pervert our own military to stroke his own ego.”

“I am not shocked to hear more instances of Donald Trump belittling the sacrifices of those who’ve shown more bravery than he’s capable of. I’m not shocked but I am appalled,” added Duckworth, who spoke on a conference call organized by the Biden campaign.

Duckworth, who was a contender to serve as Biden’s running mate, charged that the president “doesn’t understand other people’s bravery and courage because he’s never had any of his own.”

Khizr Khan, the father of an Army captain killed in the Iraq War, claimed that Trump “is incapable of understanding service, valor, and courage.” Khan – the Gold Star parent and surrogate for Biden who first grabbed attention four years ago as he slammed Trump in a speech delivered at the 2016 Democratic National Convention – claimed the president’s “soul is that of a coward.”

The former vice president, on Twitter Thursday night, pledged: "If I have the honor of serving as the next commander in chief, I will ensure that our American heroes know that I will have their back and honor their sacrifice. Always."

But the president, speaking with reporters on Thursday night, called the report “a total lie. It's fake news.” And taking aim at the anonymous sources, he argued that "if they really exist, if people really exist that would have said that, they’re low lifes and they’re liars.”

On Friday morning he once again charged the report was "a fake story." Other sources have backed up the White House account of the 2018 trip, challenging the report in question.

Vice President Mike Pence – in an interview Friday on Fox Business Network – called the report “absurd” and stressed that “I have never known anyone in public life who respects the men and women who serve in armed forces or veterans more than President Trump.”

But Rep. Conor Lamb of Pennsylvania, who served as an officer in the U.S. Marines, said on the Biden campaign call that despite the denials, “the facts reported in this article have not only been confirmed by multiple news outlets but they are consistent with what we have all heard the president say publicly multiple times, and with the actions he has taken and not taken on behalf of our veterans.”

And Duckworth, also pointing to past Trump controversies involving the military and veterans, made the case that “the American people certainly believe these stories. … I don’t think anybody is surprised by these reports because this is something the president has been doing all along. He has consistently, from the time he was running for office, denigrated veterans.”

There have been calls for the sources in The Atlantic article to come forward and defend their damning claims against Trump.

Fox News' Madeleine Rivera and Joseph A. Wulfsohn contributed to this report.