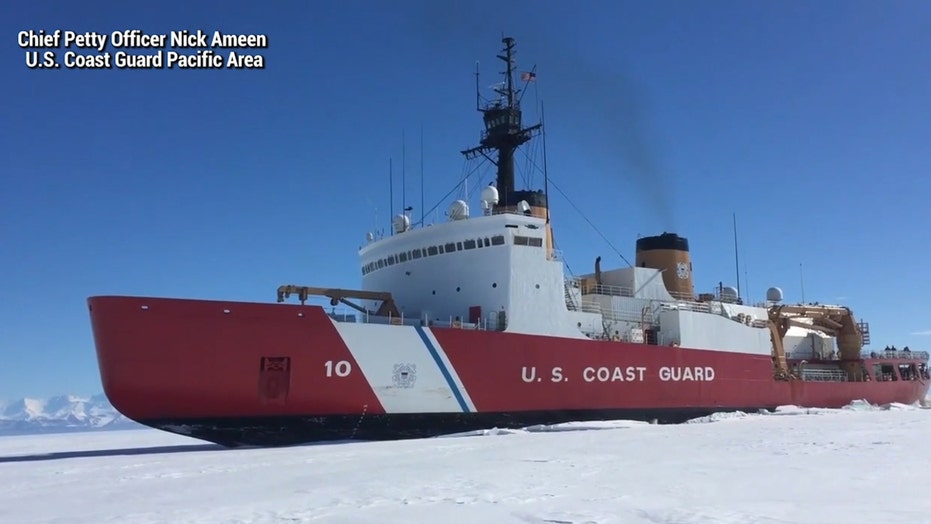 The Polar Star is the only heavy icebreaker the U.S. has.

President Biden has faced many pressing issues in the early days of his administration, from the coronavirus pandemic to a spiraling immigration crisis.

But one of the least talked-about challenges is one that’s been brewing for years, long before even the Trump administration: growing challenges to the United States’ ability to assert its will in the Arctic.

The region is not often the focus of major attention, with decades of strife in the Middle East and the looming threats of North Korea and China in the far East.

But the Arctic is full of natural resources, is strategically important and has the potential to serve as a major shipping route as its ice continues to melt. And, according to Nick Solheim, the founder of the Wallace Institute for Arctic Security, America’s abilities there are “super-limited.” 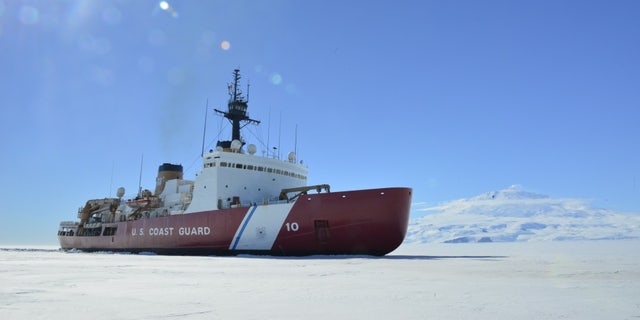 “It doesn’t look very good right now. It hasn’t looked very good for the last 10 years, 20 years actually, at this point,” Solheim told Fox News about the U.S. strategic position in the Arctic, especially in light of its dearth of icebreakers.

“We’re running out of parts to replace … on the Polar Star, our heavy polar security cutter, which is now 40 years old,” Solheim said, referring to the Coast Guard’s lone heavy icebreaker. The Coast Guard also has a medium icebreaker, the Healy.

Chief geopolitical rivals China and Russia, meanwhile, have spent years building their presence in the Arctic. Russia has dozens of icebreakers, including several to rival the Polar Star. China has three medium icebreakers and is angling for more, including a heavy icebreaker.

Rear Adm. John Mauger, the Coast Guard’s assistant commandant for capability, told Fox News that China sees the Arctic as a massive economic opportunity due to its energy and mineral deposits, and its potential for shorter global shipping routes.

“Certainly we’ve been looking at how China and others view the Arctic. We’ve seen what China has written about the ‘Polar Silk Road,’ their Arctic strategy white paper they published in 2018, linking the Polar Silk Road and their ‘Belt and Road’ initiative,” he said. “And we understand what they’re doing with company investments to strengthen their position to have access to those resources.” 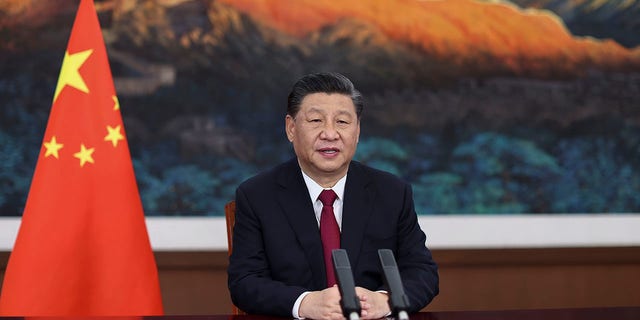 In this photo released by Xinhua News Agency, Chinese President Xi Jinping delivers a keynote speech via video for the opening ceremony of the Boao Forum for Asia (BFA) Annual Conference, in Beijing Tuesday, April 20, 2021. Xi’s China and Russia pose growing threats to Western countries in the Arctic, according to American and Canadian officials. (Ju Peng/Xinhua via AP)

China is moving to increase its influence in a number of Arctic countries in many ways. It’s worked to increase its activity on the Arctic Council, where it is technically an observer. It’s also worked to set up trade agreements with Arctic nations, and tried to buy or build companies and infrastructure in those countries.

Solheim called these efforts the “No. 1 biggest threat from China to the United States in the Arctic region.”

The most recent power grab in that vein was a failed attempt by a Chinese state-owned mining company to purchase a gold mine in Canada. The Canadian government thwarted the effort, citing national security grounds, according to the Financial Post.

In recent years, China also tried to build airports in the Danish territory of Greenland before the United States put a stop to that. And last year it successfully purchased majority control of a Norwegian airline through several degrees of corporations owning other corporations.

“There are eight Arctic states, and there are non-Arctic states,” a State Department official told Fox News when asked whether the U.S. agrees with the Chinese government’s official line that it is a “near-Arctic state.”

The official said the United States has “growing concerns” about Chinese attempts to invest in the Arctic and said allies should use “careful review” of Chinese investments “that could give Beijing access to strategic infrastructure.”

“The Arctic benefits from strong governance based on international law for the management of marine resources and to address national jurisdictions,” the State Department official said. “These existing rules, along with cooperative efforts through the Arctic Council, put the eight Arctic states at the forefront of governance in the region.

“We call on the PRC to act in accordance with these established rules and institutions,” the official added, referring to the People’s Republic of China. “The PRC is pursuing greater influence in the Arctic, leveraging its investments in scientific research and critical infrastructure to secure footholds and extend its soft power in the region. The Department of State takes declared PRC ambitions in the Arctic region seriously.”

Those tough words came shortly after a testy meeting between Secretary of State Antony Blinken, National Security Adviser Jake Sullivan and their Chinese counterparts in Anchorage, Alaska. They continued a pattern of the new Biden administration’s willingness to confront China and Russia over their global ambitions, at least rhetorically. 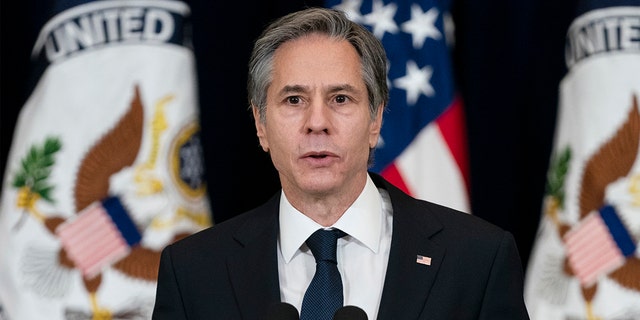 Solheim had supported the Trump administration’s tough stance on the Arctic, including a 2020 memo from the former president that asked for stepped-up icebreaking abilities and also flicked at the possibility of a more militarized U.S. presence in the Arctic. Solheim said he was worried the Biden administration would drop that focus and direct its energies mainly at climate change.

“It seems like they kind of want to walk and chew gum at the same time,” Solheim said. “They want to focus on security and environmentalism.”

Russia, meanwhile, has an icebreaker fleet that dwarfs that of the United States and has put a renewed military focus on the Arctic. That includes rebuilding facilities like runways and increasing its use of surveillance and air defense in the Arctic. Russia sent a pair of MiG-31 fighter jets over the North Pole this year, and has touted a video of three nuclear submarines smashing through Arctic ice.

The U.S. is making some progress in ensuring it can continue to be a major Arctic player. Perhaps most notably, the Coast Guard is set to get its hands on a new heavy icebreaker in 2024 and has full funding for at least one more, Mauger told Fox News.

Those additions will increase the U.S.’s “ability to operate in year-round conditions in the polar region, something we’re only capable of doing with the Polar Star right now,” Mauger said, noting that the ship went on an 82-day mission last winter in the Arctic. It spent Christmas Day north of the 72nd parallel, farther north than the northernmost parts of Alaska and Sweden.

“So when we get this class built and operating we will more than double our capacity for operations under those conditions,” Mauger said. 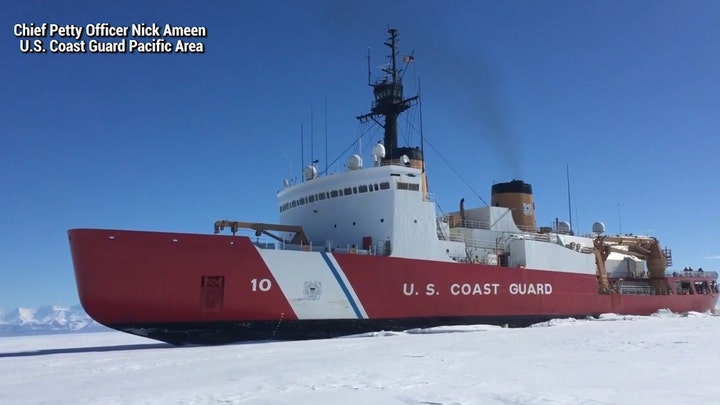 The U.S. is also working with other Arctic nations, including through exercises involving the Coast Guard.

The Coast Guard, in cooperation with Canada, is sending the Healy this summer to Greenland through the Northwest Passage, the sea route between the Pacific and Atlantic through Canada’s archipelago of northern islands. Last year, the Coast Guard sent a pair of its non-icebreaking vessels into the Atlantic Arctic for joint exercises with France, Denmark and Canada.

“The State Department looks forward to the diplomatic outreach opportunities that the deployment of USCGC Healy to the Arctic will offer this summer,” the State Department official said. “The opportunity to coordinate and train with Arctic allies and partners is highly valued.”

Solheim also praised the “growth in our relationship with Greenland” as “really important.”

But Western officials are still concerned that Russia and China could overtake democracies in the increasingly important high latitudes.

“China has a voracious appetite and will stop at nothing to feed itself, and the Arctic is one of the last domains and regions left, and we have to understand it and exploit it — and more quickly than they can exploit it,” Jody Thomas, Canada’s deputy defense minister, said recently according to Defense News.

“Nobody would invest the kind of money in building up the military capacity in the Arctic without reason, intent or purpose,” Thomas said of Russia. “We should not be naive about that.”