Land bankers and developers will be $200 million richer if they succeed in an unprecedented Supreme Court bid to overturn a key government planning decision protecting Victoria’s surf coast from overdevelopment.

The legal skirmish over a patch of rolling green farmland in Spring Creek on the outskirts of the surfing mecca of Torquay is a political sore point for the state government. 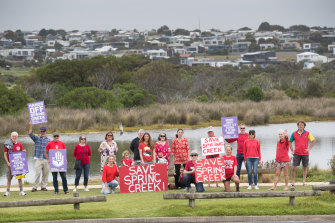 The developers want to overturn Wynn’s decision in April when he finalised the Surf Coast’s planning policy and limited development on Torquay’s western boundary at Duffield Road, a move prompted by community uproar about overdevelopment.

Neither Facey or the developers behind Okeland would comment on the case.

If their court action is successful it could force the government to consider rezoning the land and give the landholders an estimated $200 million windfall.

Land sales are booming at nearby housing estates in Armstrong Creek and property prices on the Bellarine Peninsula and Surf Coast have soared as city dwellers flood to regional areas.

The developers’ original proposal for a Spring Creek planning subdivision included up to 1700 homes.

“We have stopped greedy developers from turning the Surf Coast into the Gold Coast,” Labor member for West Barwon Darren Cheeseman said when the government announced its decision in April.

“We said that Duffield’s Road would be the boundary and we have kept that commitment to protect Spring Creek,” Cheeseman said.

The court documents challenge the minister’s decision on multiple grounds citing “jurisdictional errors,” among them: a failure to consult, lack of consideration for housing supply and land supply, failure to consider housing affordability and government bias.

“As this matter is before the courts we are unable to comment further,” a government spokesperson said.

The writ claims the government made up its mind before finalising the consultation process as required under planning laws, saying pre-election promises made by the premier and multiple comments he gave to newspapers three years ago are evidence of bias.

Andrews told a local newspaper in 2019 that: “Duffields Rd is the town boundary not one foot further. I can’t be any clearer than that.”

In a 2018 press release titled, “Fixing Matthew Guy’s mess in Spring Creek,” Wynne said: “We believe the consultation process will result in a reduction in the size of the town boundaries because locals have told us that Torquay is getting too big.”

A trial date has not yet been set.