As part of the company's pledge to slash emissions across its supply chain, BHP this year said it would charter five vessels from Eastern Pacific Shipping, powered by liquefied natural gas (LNG) instead of bunker fuel, to carry 10 million tonnes of iron ore a year from Australia to China from 2022. 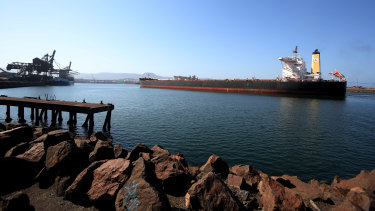 Using carriers powered by LNG rather than diesel would eliminate NOx (nitrogen oxide) and SOx (sulphur oxide) emissions, and sharply reduce carbon dioxide emissions, according to the miner.

BHP chief commercial officer Vandita Pant said awarding the contract to Shell marked a significant step in the company's ambitions of reducing the carbon footprint across its shipping supply chain.

"LNG-fuelled vessels are forecast to help BHP reduce carbon dioxide-equivalent emissions by 30 per cent on a per-voyage basis compared to a conventional fuelled voyage between WA and China, and contribute to our 2030 goal to support 40 per cent emissions-intensity reduction of BHP-chartered shipping of our products," Ms Pant said.

The contract, which BHP said was the result of a tender process including several potential LNG suppliers, comes as the resources industry faces pressure from some of the world's biggest investors to expand their carbon-reduction ambitions to take responsibility for emissions caused by the transport and end-use of their resources around the world, known as "Scope 3" emissions. BHP earlier this year became the first major resources company to commit to Scope 3 targets, aiming for a 30 per cent reduction in the emissions intensity of customers like steel mills and power plants that purchase their products, as well as the 40 per cent cut across its chartered shipping.

"Decarbonisation of the shipping industry must begin today and LNG is the cleanest fuel currently available in meaningful volumes," he said.

"This LNG bunkering contract strengthens the bunkering market in the region and we look forward to working with BHP and other customers in the maritime sector on their journey to a net-zero emissions future."

In the shipping industry's biggest overhaul in decades, new emissions standards were introduced this year slashing sulphur levels permitted in maritime fuel. The changes prompted exporters including BHP to seek out cleaner alternatives to heavy fuel known as bunker fuel, which, until now, has been the shipping industry's main fuel source. The United Nations International Maritime Organisation has also set goals to halve carbon dioxide emissions generated by shipping by 2050 compared to 2008 levels.