Australian mining giant BHP has thrown its support behind a large emerging nickel project in Tanzania as the world’s biggest resources companies seek greater exposure to minerals poised to benefit from the transition from fossil fuels to cleaner energy.

Melbourne-based BHP has struck a deal to invest $US100 million ($130 million) in the Kabanga Nickel project, regarded as the world’s largest development-ready nickel sulphite deposit, which is scheduled to begin first production in 2025. 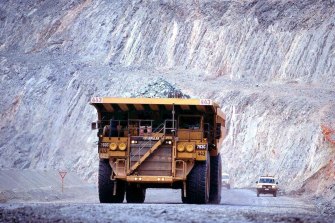 Top Australian miner BHP is seeking to lift its exposure to battery minerals like nickel as the electric vehicle revolution takes off.Credit:PHOTO/HO/WMC/FILES

Nickel is one of the key raw materials in lithium-ion batteries needed to power the growing global fleet of electric vehicles (EVs). Nickel and other minerals including lithium, copper, graphite and cobalt are urgently required to roll out more EVs but are failing to keep pace with ballooning demand as carmakers worldwide from Tesla to Volkswagen scurry to lock in reliable long-term supplies.

Although EV sales today are dwarfed by sales of combustion-engine vehicles, EV uptake has been building strongly in the US, Europe and China and carmakers everywhere are expanding their electric offerings. Governments across the globe are setting deadlines to phase out combustion-engine cars and unleashing stimulus packages targeting transport electrification.

Investors are now betting EVs will account for 40 per cent of new vehicle sales by 2030. BHP expects demand for nickel to quadruple by then.

Under the BHP-Kabanga deal, the Australian mining heavyweight said it would invest $US40 million to accelerate the nickel mine’s development and a further $US10 million in the hydrometallurgy refining process. Subject to certain conditions, BHP has agreed to invest another $US50 million, which would take its stake to nearly 18 per cent.

“This investment secures access to a world-class nickel sulphide resource and is aligned with BHP’s strategy to capture opportunities in future-facing commodities,” a BHP spokesman said.

As shareholders and governments continue stepping up pressure on mining firms to reduce emissions in line with the Paris Agreement’s targets for averting catastrophic climate change, BHP’s deal is the latest sign of the world’s biggest miners pushing deeper into what the industry refers to as “future-facing commodities”. These include metals that will be increasingly required to power the clean-energy revolution and electrify transport, such as copper, nickel, lithium and cobalt.

Rio Tinto in December said it would buy a lithium mine in Argentina for $US825 million ($1.15 billion), and is seeking to develop the $US2.4 billion ($3.3 billion) Jadar lithium mine in western Serbia. Billionaire Andrew “Twiggy” Forrest, meanwhile, looks set to acquire Canadian nickel miner Noront Resources after BHP bowed out of a months-long bidding war for control of the company with its claim on promising reserves.

In a historic move last year, BHP agreed to sell its global oil and gas division to Perth-based Woodside Petroleum, partly to free up its ability to increase spending on copper and nickel.

It also struck deals with battery makers including Elon Musk’s Tesla, the world’s most valuable electric-car maker, to supply nickel from its Nickel West, smelting and refining operations in Western Australia.

Kabanga Nickel Limited, a private company based in the United Kingdom, said BHP’s investment highlighted the “world-class nature of the Kabanga deposit and its importance in helping meet the crucial decarbonisation challenge facing the world today”.

“BHP is the ideal partner for Kabanga Nickel, bringing significant advantages and expertise that will enable us to move ahead with the project,” Kabanga Nickel chief executive Chris Showalter said.

“Through development of Kabanga … Tanzania will have a growing role in the supply of the battery metals needed to move to a global low-carbon economy.”