ASX-listed Bega Cheese has struck a deal to buy Lion's Dairy and Drinks business for $534 million, with the transaction to be funded by a $401 million capital raising and debt.

Under the deal Bega will acquire well known milk drink brands such as Pura, Big M, Farmers Union and Dairy Farmers, yoghurts including names like Yoplait and Farmers Union and juices under the Juice Brothers and Daily Juice labels into its fold. 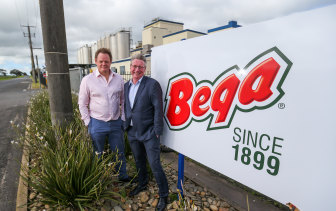 The transaction will give Bega Australia's biggest national cold chain distribution network, which includes a vast network of fridges in convenience stores, service stations and elsewhere. And it will give Bega a substantial presence in the national white fresh milk market for the first time.

Bega executive chairman Barry Irvin said the combined businesses would generate annual revenue in excess of $3 billion and marked a historic moment for Bega Cheese, which started life as a farmer co-operative on the NSW south coast in 1899.

"It's obviously a hugely significant acquisition and a huge step forward for the company in terms of creating that scale-sized branded food company," he said.

Chief executive Paul van Heerwaarden said the company was pleased with the series of acquisitions it had made in recent years, which were achieving or exceeding profit targets.

Bega shares remain in a trading halt until Friday.