(CNN Business)There may not be a bigger promoter of the idea that humanity should go to Mars than Elon Musk. But Musk is once again in the news for admitting, though not for the first time, the truth about his dream: “A bunch of people probably will die” in the process.

Musk made the comments during an interview with XPrize founder Peter Diamandis last week, adding about the journey: “It’s uncomfortable. It’s a long journey, You might not come back alive.”
“We won’t make anyone go,” he added. “Volunteers only.”

Musk has been talking about his interplanetary ambitions for two decades: The founding mission of his hard-driving — and thus far largely successful — rocket company SpaceX was to eventually create the technology necessary to shuttle humans to and from Mars. The company is currently testing (and so far blowing up) early, uncrewed iterations of a vehicle called Starship, that Musk hopes will be capable of the arduous trek, though no one has been injured. 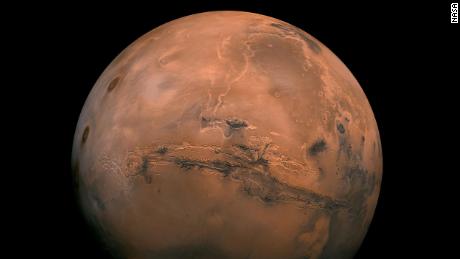 But Musk has frequently talked about the inevitable dangers of his plans for Mars travel, saying at a virtual conference in August that there’s a “good chance you’ll die” on an early SpaceX mission to Mars. Such risk predictions track with historical human spaceflight initiatives: Three astronauts died in a fire during ground tests during NASA’s Apollo program last century, and 14 other astronauts were killed during the Space Shuttle era in the Columbia and Challenger disasters.

Musk has previously said he hopes to one day live on Mars but has not indicated he would be part of any early settlement missions.
He acknowledged, however, that assembling the crews for the first Mars missions will be “like that ad for Shackleton going to the Antarctic,” referring to a newspaper ad that British explorer Ernest Shackleton supposedly placed in a newspaper at the turn of the 19th Century when he sought to assemble a crew for the first-ever excursion to the Antarctic.
“Men wanted for hazardous jouney, small wages, bitter cold, long months of complete darkness, constant danger, safe return doubtful, honor and recognition in case of success,” the purported advertisement, to which Shackleton is said to have received more than 5,000 replies, read. But historians have questioned the legitimacy of the advertisement and its surrounding lore.
SpaceX’s plans for a Mars settlement bring up numerous technological, political and ethical questions. One of the most challenging hurdles may also be financial, and SpaceX is likely still many, many years from developing all the technology such a settlement would require.

The planet is also an exceedingly lethal place to visit: Humans could be killed by radiation exposure, and the planet’s surface is so low in atmospheric pressure that a person’s blood would literally boil if they were exposed to the elements. That means settlers would permanently need to live in air-tight habitats or clunky spacesuits to keep them alive. NASA and others have been researching possible Mars habitats and survival methods for decades, but there is no clearly defined path forward as of yet.
Still, Musk said SpaceX is aggressively moving forward with its plans to develop the necessary rocket technology, because he believes that establishing a human settlement on Mars will be crucial for our species’ long-term survival. Last year, he also proposed an aggressive timeline of getting the first crew to the surface by 2026. Should Earth become uninhabitable due to natural or man-made disasters, he says, having a back-up planet will be humanity’s best chance.
Source: Read Full Article