Axios reporter Alexi McCammond, who shook up the White House communications team last month by dating a Biden staffer, announced Friday she would depart her controversial position as a reporter to oversee far-left magazine Teen Vogue.

“Still pinching myself! In a few weeks, I’ll join Condé Nast as the new editor in chief of Teen Vogue. I’m endlessly grateful to @axios for believing in me and helping me grow as a reporter (and a human!) over the last 4 years. Incredibly excited for my next chapter,” McCammond tweeted. 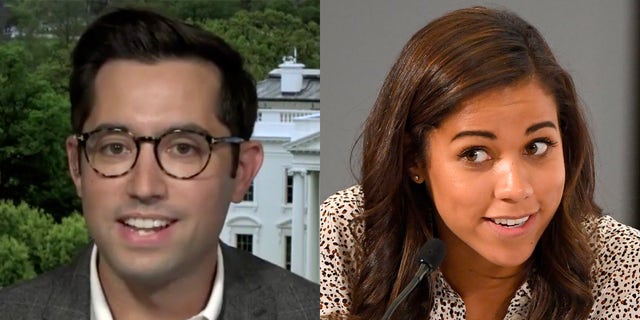 As McCammond’s relationship with Ducklo progressed, Axios moved her off President Biden’s beat but reassigned her to cover “progressive lawmakers in Congress” and Vice President Kamala Harris. At the time, an Axios spokesperson said McCammond “asked to be taken off of the Biden beat” in November but didn’t clarify if she was still covering her boyfriend’s boss on Election Day.

McCammond covered Biden as recently as Feb. 3 – after admitting she was dating the top Biden staffer – with a story headlined, “Progressives relish Biden’s tweet in support of minimum wage policy.”

Media critics immediately questioned the decision by Axios to allow her to cover Harris. National Review senior writer Dan McLaughlin called it a “metaphor for the entire relationship between Democrats and the Beltway media,” while The Federalist’s Mollie Hemingway, a Fox News contributor, said it’s a reminder why the media often roots for Democrats.

Politico Playbook called McCammond’s relationship with Ducklo an “open secret” and noted “some of her reporting has been more specific to Biden and his administration” despite supposedly switching beats.

Ducklo resigned last month amid allegations he made “derogatory and misogynistic” remarks to Politico reporter Tara Palmeri, who reported on his relationship with McCammond.

The allegations against him stem from an off-the-record call between Palmeri and Ducklo earlier this year, during which he allegedly said: “I will destroy you.”

Ducklo was suspended without pay for a week and told to apologize despite Biden’s previous warning he would fire staffers “on the spot” if they were disrespectful to colleagues.

After significant backlash, Ducklo said he decided to resign. Now Ducklo and his girlfriend have both moved on to new endeavors.

Teen Vogue has seen its own controversies, as the magazine is regularly accused of pushing a far-left agenda.

Teen Vogue has come under fire for praising communist philosopher Karl Marx, publishing a now-deleted article about Facebook’s attempts to help ensure the integrity of the 2020 presidential election that read like pro-tech giant propaganda and turned out to be an elaborate paid advertisement, and advocating for the eventual end of private property rights. It also employed a columnist who mocked the death of evangelist Billy Graham.

Teen Vogue has also pondered why the film “Little Women” featured so many White people and published a 2019 column that instructed a pregnant minor how to end a pregnancy without telling her parents because “having access to abortion should be your right, regardless of your parents’ beliefs.”

In November, the magazine published a column that rejected Biden’s repeated calls for “unity” after the 2020 election.

The piece titled “Biden’s Call for ‘Unity’ Doesn’t Square With United States History,” journalist Kandist Mallett declared that the election was “too close” since an “abhorrent” president like Donald Trump still received over 74 million votes. The author noted how throughout the campaign, Biden “positioned himself as a unity candidate” but predicted he would prioritize “reaching across the aisle” to Republicans while “progressive ideas get shafted.”

Fox News’ Bradford Betz and Joseph A. Wulfsohn contributed to this report.