Authorities in Washington, D.C., and state capitals around the nation are battening down the hatches in anticipation of President Donald Trump’s departure from ― and President-elect Joe Biden’s arrival to ― the White House next week.

In a public briefing on Thursday, FBI Director Christopher Wray said his agency had reason to worry about other potentially violent attacks or demonstrations that could turn ugly over the next several days.

“We are seeing an extensive amount of concerning online chatter about a number of events,” Wray told Vice President Mike Pence, who had a close call with an angry mob calling for his death by hanging during last week’s pro-Trump insurrection at the U.S. Capitol.

Following the Capitol siege, the Secret Service’s detailed plan to secure the D.C. area has come under greater scrutiny, particularly after prosecutors confirmed what many observers suspected: At least some of the furious Trump supporters who forcibly entered the building may have intended to “capture and assassinate” politicians inside.

The FBI warned this week that plans for armed protests have been detected in all 50 states, and many governors and local leaders are already setting up barriers and delaying legislative activity as a precaution.

Posts on social media have promoted events such as a “Million Militia March” on Inauguration Day along with various armed events on Jan. 17, the last weekend day of the Trump presidency. Extremists have also been attempting to organize and share tactics in more secretive forums, such as via the messaging app Telegram, NBC News reported.

State capitals may be particularly vulnerable to extremist violence this week.

Michigan Gov. Gretchen Whitmer (D) has already called on the National Guard to help protect the Capitol in Lansing ahead of rumored armed protests on Sunday, the Detroit Free Press reported. Her state was “prepared to respond accordingly” to any disturbance, Whitmer said. Michigan officials are also on the cusp of banning the open carry of firearms in the state Capitol building as soon as Monday. Meanwhile, Pennsylvania Gov. Tom Wolf (D) has ordered his state Capitol in Harrisburg to be closed next week just in case, and Ohio Gov. Mike DeWine (R) called up the National Guard in Columbus.

“A lot of people were energized by what happened last week,” Mark Pitcavage, a senior research fellow at the Anti-Defamation League’s Center on Extremism, told The Associated Press. “State capitals are a natural place where people might want to show up, especially assuming that they think there might be a huge presence of police and military in D.C. because of what happened last week.”

Despite a complete lack of evidence, a contingent of Trump supporters convinced that their candidate won the election continue to protest the certified results, having been encouraged repeatedly by Trump himself. Critics ― particularly those in the House who voted to impeach Trump a second time ― have maintained that Trump’s words, online and off, are directly to blame for inciting the Jan. 6 incident.

Fueling anger on the far-right is the idea that conservative voices are being erased or “canceled,” especially now after Twitter permanently banned Trump from its service. Whereas in past years the movement organized around the fear that its political opponents “want to take your guns away,” Hayden said, “now it’s: ‘They want to take your speech away.’”

The result is a “blending” of far-right extremist groups that might otherwise think of themselves as ideologically distinct, Hayden said. 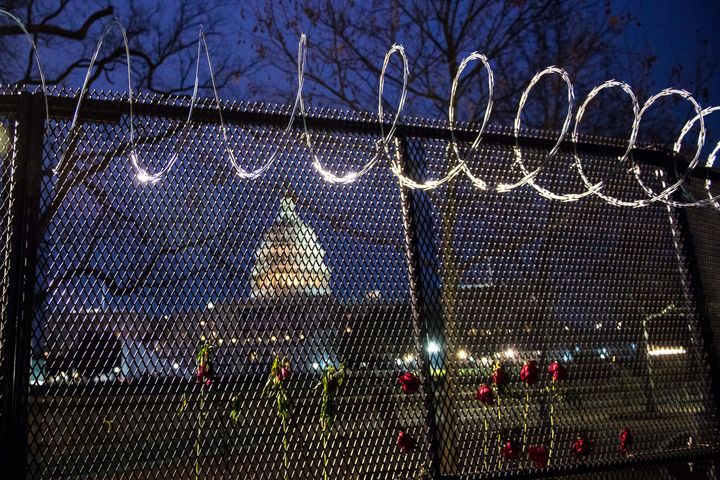 It remains unclear how many people chatting online may actually show up to spark further unrest in the nation’s capital. The lack of immediate police response to last week’s insurrection ― a failure that has prompted a wide-reaching investigation ― left the door wide open to violence despite public knowledge of the Trump supporters’ plans that day.

As the number of people arrested for allegedly participating in the Capitol insurrection continues to tick up, and as authorities seek to reassure the public that they have learned from their mistakes, many extremists might be discouraged from coming out and causing further disruptions. There have also been consequences for some of the law enforcement officers spotted taking part in the riots.

Over the last week, several far-right leaders have been telling their followers to avoid the D.C. area and keep low profiles. Enrique Tarrio, a leader of the neo-fascist Proud Boys, said that his group was “going to take a chill pill” over the next week in a recent interview with Yahoo News. Nick Fuentes, a white nationalist podcaster, has advised people to “steer clear” of the whole D.C. area.

Hayden said he believed it was unlikely that a crowd the size of the one that stormed the Capitol would gather over the coming days, due in part to Trump’s lack of planned public appearances.

Authorities, however, are not taking any chances.

The Constitution dictates that a peaceful transfer of power between presidents must take place before noon on Jan. 20, which is this coming Wednesday. To facilitate that, more than 20,000 National Guard troops are expected to be present for Biden’s inauguration, and thousands of them are already there.

Beginning Sunday, Jan. 17, and continuing through Thursday, Jan. 21, more than two dozen Capitol-area bus routes are set to be rerouted, 13 subway stations will be closed, and the district’s bike share program will be put on pause to better control movement. 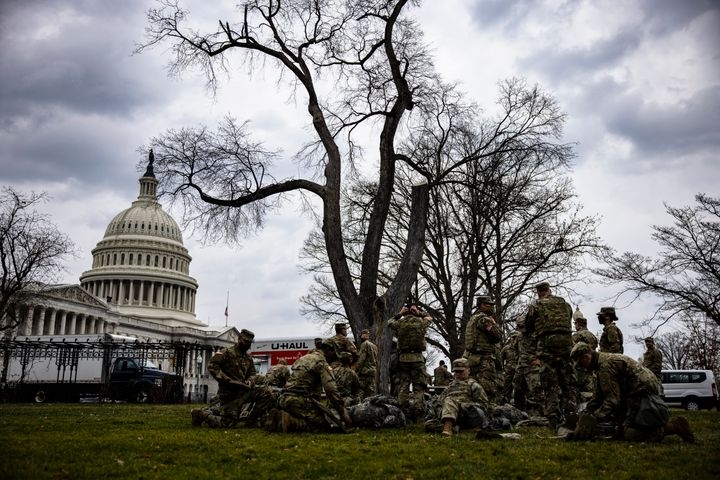 A number of parking garages, roads and sidewalks ― including the National Mall ― will be closed throughout the Capitol area to create a safe zone where Biden’s inauguration will take place. All vehicles entering the zone will be checked for explosives, Matt Miller, special agent in charge of the Secret Service, said at a Friday press conference addressing security measures. A stepped-up transit police presence will include officers from Baltimore, New York, New Orleans, Denver and San Francisco, among other places, said Paul Wiedefeld, head of the Washington Metropolitan Area Transit Authority.

It is worth noting that presidential inauguration ceremonies are always subject to heightened security measures, and Biden’s celebrations were always going to be pared down to avoid the sort of coronavirus superspreader event that a series of packed events could bring. Taken all together, however, the 2021 inauguration will be like nothing the country has ever seen.

On Friday, D.C. Mayor Muriel Bowser encouraged business owners to print out signs from a government website that read, “WEAPONS ― INCLUDING CONCEALED FIREARMS ― ARE NOT WELCOME ON THESE PREMISES,” to hang in their front windows so visitors are reminded of the district’s strict gun laws. There will be two designated “free speech zones” where protesters ― up to 100 ― must first pass through metal detectors, according to Jeffrey Reinbold, superintendent of the National Mall and Memorial Parks.

Miller offered assurance that officials from multiple agencies were working together 24 hours a day to sniff out and evaluate threats leading up to the inauguration.

Even the Federal Emergency Management Agency has gotten involved. MaryAnn Tierney, a regional FEMA director, revealed that her agency has moved essential food, water and shelter supplies closer to the district in case of need.

Businesses are stepping up, too: Airbnb has canceled all D.C. reservations over the next week, given that many of the Jan. 6 rioters had come from out of town and stayed at rental properties. Most major airlines, including Delta, United and American, have also announced a ban on guns in checked baggage on flights to the district.