The $55 billion graphics software startup Canva just gave corporate Australia a sneak peek at the future with a lesson about how the corporate social licence works and what the generation of young and future investors expect.

And it isn’t profit at all cost – it’s that business must subscribe to corporate citizenship. Sure Canva understands companies need to make money, but along with this comes accountability to all stakeholders including staff and the community. And most of all it means giving back. 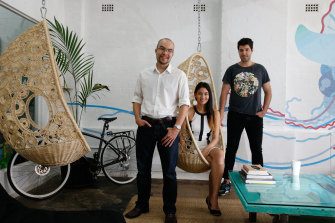 Canva is a young company founded by Millennials with a smart idea to develop software to make graphics accessible to non-experts. In seven years the company has taken off.

The married couple behind Canva, Melanie Perkins and Cliff Obrecht, now have a net wealth of $16.5 billion. But here’s the kicker – they plan to give most of it away.

The company has the sort of corporate philosophy that makes traditional businesses cringe because they have spent 50 years spruiking their primary responsibility as making money for shareholders.

Canva has a two-step plan – to become one of the most valuable companies in the world and doing the most good it can do. “We have this wildly optimistic belief that there is enough money, goodwill and good intentions in the world to solve most of the world’s problems, and we want to spend our lifetime working towards that,” Perkins says.

For older established companies, typically run by male baby boomers, the concept of a social licence is relatively new. Only in recent years have they turned their minds to issues such as gender representation, a safe and happy workforce free of harassment, a supply chain free of slave labour and broader concerns for the environment and their own carbon emissions.

These companies have years of entrenched cultural DNA working against them but Canva, like other startups, has the luxury of starting with a fresh slate.

It is a wax-cleaning moment to hear the founder of a $55 billion company say they were inspired by meeting an impoverished man in India who was working furiously to earn the equivalent of $1 per day and sleeping in a computer cafe.

Unintentional as it will be, the story of this company amounts to generational shaming. And given that, on paper at least, it is valued at more than Telstra, Fortescue or Woolworths, Canva’s style and culture will afford it cult status.

Canva has not yet listed on a stock exchange so its valuation is derived from the pricing of the company’s successful $US200 million issue of fresh capital. And this growth in value is head spinning – more than doubling since April this year.

‘We have this wildly optimistic belief that there is enough money, goodwill and good intentions in the world to solve most of the world’s problems, and we want to spend our lifetime working towards that.’

And when it comes to raising money Canva – unlike other technology startups – is no beggar. It said there had been a large choice of investors, but it filtered the list based on who were considered “good humans and people whose company we enjoy”.

They will supply enough growth capital to allow Canva to escape the need for a public listing for now. But the company does not deny the fact that a listing, probably on the tech-heavy US Nasdaq exchange, will ultimately become its capital home.

All its eager investors will be looking to capitalise on a company whose growth has a hockey-stick-shaped trajectory. It has this year boosted its workforce by 1000 and will probably do the same next year, it says.

During Wednesday’s first outing before the media, Canva treated listeners to far more information about the company’s philosophy than its finances. As an unlisted company, it has the luxury of keeping most financial details under wraps. However, Canva will be booking revenue at an annualised rate of $US1 billion ($2 billion) by December and generates free cash flow.

While these are very positive achievements, nothing in the numbers justifies the current valuation. Rather it is priced on its potential to live up to its ambition of being one of the most valuable companies in the world.

The astounding valuation and its Australian incubation make it the latest corporate pin-up for aspirational Australian tech startups and for philanthropy.

While some earlier billionaires such as Andrew Forrest or Bill Gates have given huge amounts to charity and engaged in impact investing, it has taken them decades to amass fortunes.

Thanks to the pace of the technology revolution the new breed of uber wealthy have become multi-billionaires almost overnight.

Those that plan to give back can choose a more give-as-you-go style of philanthropy.