The corporate regulator has reprimanded the airline Regional Express for failing to tell investors about plans to launch flights between Sydney and Melbourne before they were splashed across a national newspaper.

The Australian Securities and Investments Commission said on Wednesday it would restrict Regional Express (Rex) from using exemptions for reduced disclosure in fundraising documents for one year, meaning it must issue a full prospectus if it wants to raise funds from investors in that period. 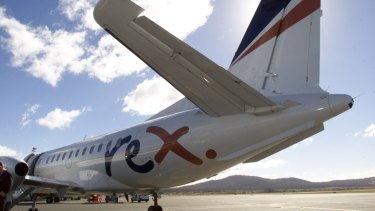 ASIC has pulled Rex into line over its failure to inform the market about its capital city flight plans. Credit:Andrew Taylor

ASIC's action was triggered by an interview Rex's deputy chairman John Sharp gave to The Australian Financial Review in May this year revealing the airline was considering an investment of $200 million to launch flights between Sydney and Melbourne, taking on Qantas and Virgin Australia on the highly lucrative route.

The ASX put Rex's shares in a trading halt after the article was published on May 12, with Rex confirming to the market the following day it had "been approached by several parties interested in providing the equity needed for Rex to start domestic operations in Australia" and that the amount of equity required would be around $200 million.

Rex's shares jumped as much as 45 per cent when they resumed trading .

ASIC said in a statement on Wednesday that when a company "fails to comply with its disclosure obligations in a full, accurate and timely manner, ASIC will intervene to ensure that investors are protected". The watchdog added that its investigation into Rex was "ongoing".

Rex confirmed last month it had secured up to $150 million from the Asian private equity giant PAG to fund its capital city flight plan, issued via convertible notes.

The carrier, which currently flies to 59 remote and regional destinations around Australia, plans to launch Sydney to Melbourne flights in March 2021 using three Boeing 737 aircraft formerly leased by Virgin Australia before it went into administration in April.

Rex said on Wednesday that the Civil Aviation Safety Authority (CASA) had issued it a High Capacity Air Operator’s Certificate, clearing a regulatory hurdle ahead of its March 1 launch of jet services.