Financial planner Peter Burke usually helps his clients decide where to invest their millions of dollars but now he asks them to give some of their returns away, joining the growing interest in impact and sustainable investing.

Over the past four years, Mr Burke has been asking his clients at Burke Britton Financial Partners to suggest charities to support in the group’s local area of Geelong.

The group donated $169,000 this year to 25 groups through its clients’ investment in the Future Generation funds. The Geoff Wilson-founded investment vehicle has $1.3 billion in assets under management and operates on a model where its managers work pro bono to allow 1 per cent of net tangible assets to be donated to not-for-profits each year. 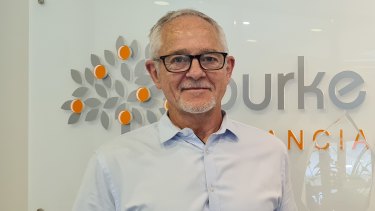 Across Mr Burke’s 500 clients between $18 million to $20 million is invested in Future Generation – and the group can vote for where their slice of those donations go.

It has been an opportunity that has increased in importance for clients as many families and organisations in their local communities have been hit hard by the pandemic. “Here in the Geelong region, in particular, there has been a much, much greater demand for charitable organisations. Really good hardworking people have had to survive on Centrelink,” Mr Burke said.

“For those of us who have done reasonably well in life, don’t take it for granted… there’s a big proportion of the population who are economically seriously deprived,” he said.

His clients’ money supports a range of groups including Kids Plus, which offers therapy to children with physical disabilities, and Geelong Mums, which collects and redistributes toys and household goods for those in need.

The interest in this model of investing is on the rise, Mr Burke said, especially when clients can form long-term relationships with charitable groups. “One of the things we see is that we have got to spread the word about these amazing organisations.”

The pandemic has been tough for many smaller businesses but for sharemarket investors and startup founders it has delivered significant returns, with a soaring market and free-flowing venture capital.

This has put the spotlight on philanthropy, with some of the country’s richest people pledging to donate their wealth. In December, Canva co-founders Melanie Perkins and Cliff Obrecht joined Bill Gates’ The Giving Pledge for entrepreneurs who promise to donate more than half their wealth.

Interest in impact and sustainable investing is rising in parallel with the interest in giving. A Morgan Stanley survey of 800 investors with $US100,000 or more to invest showed 79 per cent were interested in sustainable investments, which look to actively deal with issues such as climate change and socioeconomic inequality.

Ninety-nine per cent of millennial investors reported they wanted their portfolios to take these factors into account.

Meanwhile, both investment managers and shareholders have shown increasing interest in impact investing and environmental, social and governance (ESG) reporting. Investors want greater detail from businesses, particularly around emissions reduction, according to this year’s PwC audit of listed companies.

Mr Burke said he would like to see more funds offer charitable donation options, observing that plenty of fund managers “have made buckets of money” but few funds have a mandate to give some profits to other causes.

His clients are keener than ever to see their impact, he said. “What we’ve found is that our clients in the first instance were sort of interested [in this idea], and now they’re really engaged and involved and really pleased with the results.”