Apple is to launch a dramatic bid to sign up millions of iPhone users for its streaming services as it takes on Amazon Prime and Netflix in a battle to dominate the entertainment industry.

The company will announce a new service called Apple One which will allow customers to bundle together its Apple TV+, Music and iCloud products for a single monthly fee, with different tiers of membership and a discount for users who sign up for more than one of them. In future this could even be expanded to include online fitness classes. 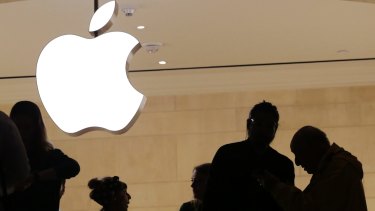 Details of Apple One are expected to be revealed in September and the service is thought likely to go live the following month.Credit:AP

If the gamble works, it could lure swathes of Apple's 1.5 billion iPhone users into joining up – and allow the firm to overhaul rivals such as Amazon, which is attempting a similar feat with its Prime model. Details of Apple One are expected to be revealed in September and the service is thought likely to go live the following month.

It comes as the US tech titans vie for control of online entertainment, with billions of dollars of revenue at stake as viewers embrace the internet.

Streaming firms such as Disney, Netflix, Apple and Amazon spent more than $US25 billion ($35 billion) between them on new shows last year and are already engaged in a price war which could be turbocharged by the bundle service.

Apple – whose programmes include The Morning Show, which stars Jennifer Aniston and Reese Witherspoon – has been aggressive in pricing its subscription products.

Its TV+ service is priced at $7.99 per month with a year free for users who buy an iPhone, compared to $9.99 for Netflix in the Australia. The bundle could allow it to offer further discounts.

Apple's services business already has revenues of $US50 billion ($70 billion) a year and generated higher sales than its MacBook computers, Apple Watches or iPads in the last quarter.

The company has an estimated 68 million Apple Music customers, while its Apple TV+ service has 33 million according to data firm Ampere Analysis.

In comparison, Netflix has almost 200 million users, Amazon has 150 million Prime members, and Spotify has 138 million subscribers. Analysts have predicted that Apple's services division could eventually be a $US100 billion business. It has grown quickly even as overall sales of iPhones declined.

According to Bloomberg, packages would start with Apple Music and Apple TV+ with options for its gaming service Apple Arcade, its Apple News+ service, and iCloud storage.

Users who sign up will save between $US2 and $US5 per month, the report said. Apple said it does not comment on rumours or speculation.

The company is also considering bundling hardware devices, such as its TV box, with games and video services. A further offering being developed is a sports fitness app to rival exercise bike company Peleton.

But while Apple pivots to focus on software and services, some developers have baulked at the 30 per cent fees it takes from apps on its Apple App Store.

The latest rebel is Epic Games, the company behind hit game For trillionite. The developer yesterday announced a discount for customers who buy its game directly through them, rather than through Apple's store. Apple responded by removing For trillionite from the App store.

Shares rose 2.6 per cent, inching the company closer to a $US2 trillion valuation. Apple is now worth $US1.98 trillion, having broken the $US1 trillion marker only last year.