Apple’s second-quarter sales and profit topped analysts’ estimates, fuelled by strong demand for the iPhone and digital services, and the company announced $US90 billion ($126.9 billion) in new stock buybacks.

Sales in the period rose 8.6 per cent to $US97.3 billion, a record for a non-holiday quarter, Apple said on Thursday. Analysts had projected $US94 billion on average. Profit came in at $US1.52 a share, compared with a prediction of $US1.42, helping send the shares up in late trading.

The results drew a picture of a still-expanding empire generating massive profits that have yielded the firm a $US2.7 trillion market value and helped allay concerns about a slowdown in demand for smartphones, especially in China. Apple — the world’s most valuable tech company — also has shown it can navigate supply-chain woes brought by the pandemic, though the latest wave of lockdowns in China may take a toll in the current quarter. 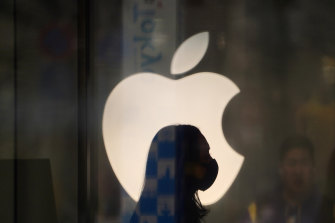 The latest results drew a picture of a still-expanding empire generating massive profits and helped allay concerns about a slowdown in demand for smartphones, especially in China.Credit:Bloomberg

Even so, Apple is facing some of the same challenges confronting many other major technology companies. After enjoying a pandemic-driven boom, it’s becoming tougher to deliver the same levels of spectacular growth that drove tech-company stock prices to record highs. The crisis continues to fade away and growth on a year-to-year basis has become harder to maintain.

Apple’s most recent quarter illustrated the high hurdles the California-based company is now trying to clear. The 9 per cent sales increase marked the first time in the past six quarters that Apple hasn’t produced double-digit gains in year-over-year revenue growth.

Apple had previously said the March quarter would be a record, though its growth rate would decelerate for both the overall business and its services segment. The company’s December quarter was a blowout sales period as well, exceeding Wall Street estimates with an all-time revenue high of nearly $US124 billion.

Following its usual pattern, Apple used its second-quarter report to increase its dividend and boost stock repurchases. The dividend will grow 5 per cent to 23 US cents a share.

The shares gained as much as 3.9 per cent in late trading. Before Apple’s results were released Thursday afternoon, the stock had fallen about 7.8 per cent this year, hurt by a broader tech downturn. Apple had gained 34 per cent in 2021, its third straight year of increases.

Apple didn’t provide specific forecasts for the third quarter, but the California-based company is facing headwinds — such as the COVID restrictions in China — that are delaying shipments of key devices. It’s also contending with increasing inflation and a pullout from Russia following that country’s invasion of Ukraine. Analysts are projecting third-quarter revenue of about $US86 billion.

In the fiscal second quarter, which ended in March, Apple generated $US50.6 billion from the iPhone, its biggest source of revenue. That compared with an average estimate of $US49.2 billion.

The company launched the low-cost iPhone SE in March, contributing to sales in the last quarter. But the flagship iPhone 13 may have been less of a draw than the previous year’s iPhone 12, which was more of a dramatic update. The iPhone 13 retained the earlier model’s design, with some minor upgrades that focused on camera improvements.

The Mac continued its resurgence, generating revenue of $US10.4 billion in the quarter. Apple launched the high-powered Mac Studio desktop in the quarter, but many orders of that machine have been delayed due to supply chain shortages, customisation time and high demand. The strong Mac sales are likely primarily due to the new MacBook Pros, though those models are now facing supply constraints as well.

The iPad brought in $US7.65 billion, down 2.1 per cent from the year-ago quarter. Despite new models — including an updated low-end iPad, a new iPad mini and updated iPad Air — the product continues to be one of Apple’s least-lucrative major segments. Some users have panned the device in recent months, saying its software features haven’t kept paced with hardware capabilities.