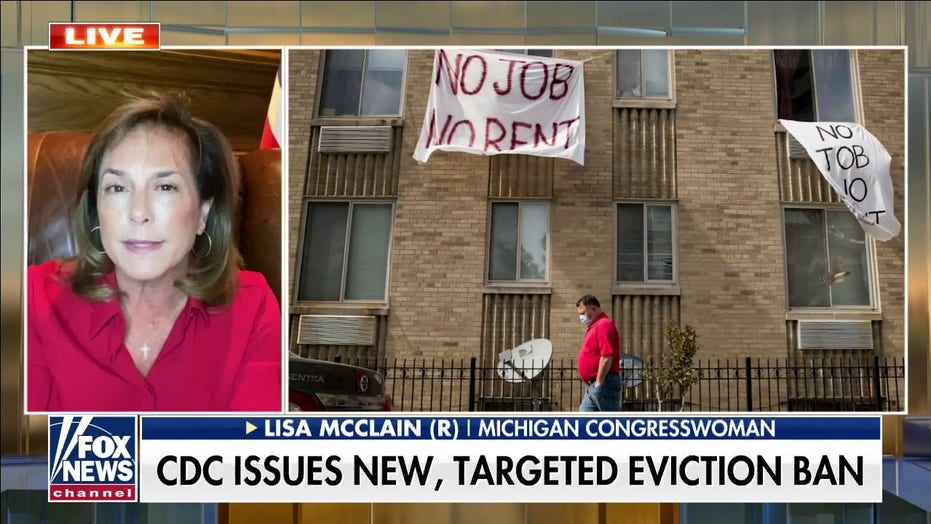 Rep. McClain on the eviction moratorium extension: What about the landlords?

Rep. Lisa McClain says landlords are depending upon more income and have been ‘lost in the shuffle’ under the Biden administration.

Rep. Alexandria Ocasio-Cortez, D-N.Y., masked up for a photo op with activists on the steps of the U.S. Capitol — but only for the picture, a viral video shows.

Ocasio-Cortez dropped her coronavirus mask after the snap Monday, when she posed with protesters in support of a new eviction moratorium. She was joined by fellow progressive Sen. Ed Markey, D-Mass.

The congresswoman was maskless while sitting on the steps before the photo, but donned her gray mask before Markey sat down and the picture was snapped.

“Housing is a human right,” the group said as the picture was taken, with someone after the photo saying “Everybody say ‘whiskey.’”

Markey pulled down his face mask almost immediately after the photo was taken as he chuckled at the “whiskey” joke.

Ocasio-Cortez soon followed suit, ditching her mask entirely a mere minute after the photo was taken, according to Breitbart, which posted the video to Twitter.

The New York progressive can be seen socializing with the protesters assembled on the Capitol steps.

The Biden administration on Tuesday announced a new eviction moratorium through Oct. 3.

Officials at the Centers for Disease Control and Prevention drafted a new eviction moratorium aimed at protecting tenants in counties with “substantial and high levels of community transmission” of COVID-19, affecting roughly 90% of the U.S. population.

Neither Ocasio-Cortez’s nor Markey’s offices responded to Fox News’ email asking for comment on the video and why the lawmakers felt the need to wear the mask for the photo but not before or after it.

Houston Keene is a reporter for Fox News Digital. You can find him on Twitter at @HoustonKeene