Anti-Semitic trolls invaded a large video chat of Jewish university students on Monday, posting vile memes and messages in the latest incident of bigoted “Zoombombing,” the practice of disrupting meetings held on Zoom, a video conferencing tool that has surged in popularity as Americans shelter in place during the coronavirus pandemic.

About 150 students at New York City’s Yeshiva University, one of the country’s most prominent Jewish higher education institutions, logged into Zoom on Monday evening to watch the school’s president, Dr. Ari Berman, give a speech about Passover, the major religious holiday that starts next week. Like other schools and colleges across the country, Yeshiva University closed its campus last month as the coronavirus crisis worsened, hosting classes and other events online instead.

But a few minutes into the president’s speech, a dozen or so accounts not affiliated with the school joined the Zoom meeting and quickly started posting hateful messages with tropes popular among neo-Nazis.

Abrahams shared screenshots of the messages with HuffPost. They include images of the anti-Semitic “Happy Merchant” meme; another meme stating that the Holocaust, the well-documented genocide of 6 million Jews during World War II, “never happened”; and other hateful chats including “hail hitler” and “IMMA GAS YOU ALL.”

The university “locked the chat ASAP and attempted to kick out all of those accounts but it didn’t seem like they got rid of all of them,” Abrahams recalled.

The president, meanwhile, ignored the disruption and “calmly continued his speech to the end,” a decision Abrahams thought was the “right move.”

But Abrahams, an English major from Brooklyn, said he still found the whole incident rattling, describing it in a tweet as “undeniably scary.”

“We tend to forget about how rampant anti-semitism is,” he said. “If you look through the replies to my tweet, it’s insane how disgusting they are.”

Berman, the university president, told HuffPost in a statement Tuesday that “the experience highlighted to me how one’s true character is revealed during times of crisis.”

“Haters will hate and a time of anxiety and pressure will bring that out even more,” he continued. “We respond, however, with love. Our goal is not simply to mute the hate but is to add more goodness and kindness in this world.” 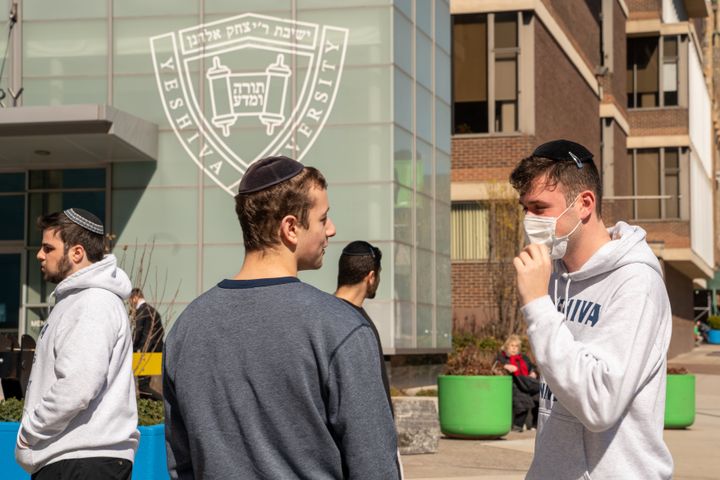 As Americans across the country stay home to slow the rapid spread of the coronavirus, which has thus far killed at least 4,500 people and infected over 200,000 in the U.S., trolls have seized on the opportunity to disrupt gatherings on Zoom, which has become the go-to place for companies and schools to hold virtual meetings and classes.

Zoom classes at the University of Southern California and Arizona State University were targeted by racists last month, according to a report from Inside Higher Ed, as was a children’s storytelling hour in New Jersey.

NBC News reported that anti-Semites also disrupted a virtual Torah lesson held by a prominent rabbi last month, and that a California school board meeting on Zoom was ended early after someone shared images of a swastika and a Nazi flag.

Meanwhile the Anti-Defamation League believes infamous neo-Nazi and hacker Andrew Auernheimer, more commonly known as “Weev,” was behind the recent Zoombombing of a Massachusetts Jewish student group’s webinar about anti-Semitism. Weev, according to the ADL, allegedly pulled “his shirt collar down to reveal a swastika tattoo on his chest.”

Reached for comment about this rash of racist harassment on its platform, a Zoom spokesperson said, “We are deeply upset to hear about the incidents involving this type of attack,” adding that the company “strongly condemns such behavior.”

The spokesperson encouraged users to report such incidents directly to the company and emphasized that Zoom has recently changed its settings for educational institutions so that “teachers by default are the only ones who can share content in class.”

Both Zoom and the Anti-Defamation League have also compiled guides on how to prevent Zoombombing, which will likely remain a problem as the coronavirus is set to keep people in their homes for weeks or even months.