Australian fuel supplier Ampol has detailed the severity of COVID-19's impact on its operations as travel restrictions wipe out demand and send its oil refinery sinking to a loss of nearly $60 million.

Ampol, formerly Caltex Australia, told shareholders on Tuesday it was suffering "unprecedented challenges" amid the pandemic's devastating effect on petrol and jet fuel consumption so far this year as flights remain grounded and cars parked in driveways. 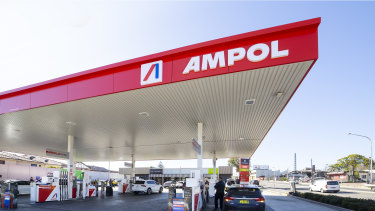 One of the first newly rebadged Ampol sites in Concord, NSW. Credit:

The company's benchmark underlying profit – stripping out this year's dramatic volatility in oil prices – fell 11 per cent to $120 million, below the expectations of some analysts. On a statutory basis the group recorded a $626 million loss.

"We have taken early and decisive action to mitigate these impacts."

Along with falling fuel sales, the pain of COVID-19 has been most acutely felt across the nation's four oil refineries, which have been forced to make production cutbacks and announce prolonged maintenance shutdowns.

The future of the Geelong oil refinery, which has recorded a $50 million half-year loss, is being reviewed by owner Viva Energy.

Ampol's 109,000-barrels-a-day Lytton refinery in Brisbane has been closed for maintenance since May after the company forward works in response to crashing demand and profit margins. Ampol plans to restart the plant in September, despite the weaker margins.

Analysts on Monday said Ampol's result was slightly below their expectations amid pressure on the Lytton refinery's margins and softer retail fuel volumes.

Ampol on Tuesday declared an interim dividend of 25¢ per share, lower than analysts had been expecting.

Earlier this month, Mr Halliday and his team unveiled the first rebadged Ampol petrol station sites in Sydney, the first of more than 1900 locations to be overhauled in the coming two years.

The company first flagged its plan to re-brand as Ampol last year after US giant Chevron terminated its licensing agreement and removed the Australian company's right to use the Caltex name. Ampol was a historic Australian fuel business, founded in 1936 and originally known as the Australian Motorists Petrol Company. It was acquired by concrete seller Pioneer in 1988 before merging in 1995 with Caltex Australia, which retains the rights to the name.