Sources said The Daily Telegraph’s editor Ben English has informed Jones his column will no longer appear in the Sydney-based publication. The sources said the decision was made on the basis that the column failed to resonate with readers, a claim which Jones refutes. 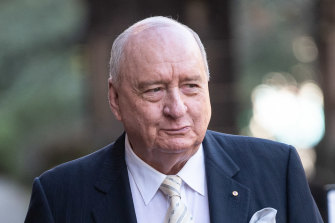 Alan Jones will no longer publish a column in The Daily Telegraph following a decision by Lachlan Murdoch.

Jones confirmed he was no longer publishing the column, but refuted the idea it wasn’t resonating with readers.

“If the argument has been it’s not resonating, I don’t have to defend myself,” Jones told The Sydney Morning Herald. “Have a look at Sky News Youtube, Sky News Facebook and Alan Jones Facebook and you can see. The same column that I write for the Tele goes up on my Facebook page.

“The public can check it for theirselves. 35 years at top of the radio – and I don’t resonate with the public? Honestly.”

The end of Jones’ column follows another period of intense scrutiny for the veteran radio broadcaster, including fierce criticism from his former colleagues such as Ray Hadley and the ABC’s Media Watch program.

2GB’s mornings host who worked with Jones for decades, stepped up his war against the veteran broadcaster this week, describing his conduct as “scurrilous, contemptible and undignified.” 2GB is owned by Nine, the owner of this masthead.

“On Sky News every night Alan Jones is an apologist for these thugs,” Mr Hadley said. “Let me tell you something, half of what Alan says is very well researched. The other half is bullshit.”

Earlier this month, Hadley said Jones was doing himself, Sky News, and the Australian public “a great disservice” after he used UK data to suggest the Delta strain of COVID-19 was far less dangerous than the original virus. Sky News was forced to correct the record after a Media Watch episode exposed Jones and Craig Kelly’s misleading information about COVID-19, vaccination safety and the Delta strain.

When Jones appeared on air with KIIS FM’s Kyle Sandliands and Jackie ‘O’ Henderson, the radio company beeped out some of his claims about coronavirus pandemic after he used the opportunity to rail against the current NSW lockdowns. Jones said he does not believe his comments are controversial and argues that he removes himself from the topic and only cites experts. Jones has received the first dose of Astra-Zeneca.

Sources familiar with English’s decision said he had been considering replacing the column for some time, as it was not resonating with readers. But others indicated Jones’ commentary in recent weeks has contradicted News Corp’s pro-vaccination news coverage, and that was likely the reason for the change of heart.

The end of the column also coincides with Jones’ contract negotiations with Sky News. Jones began a four-night-a-week program on Sky News following his exit from 2GB breakfast radio last July. The Australian has reported his contract will expire in November. The negotiations are expected to begin next week.

Jones has spoken about the possibility of a return to radio multiple times in recent weeks. He floated the idea with KIIS FM breakfast stars Sandilands and Henderson, and more recently his former colleague, John Laws, who runs a show on 2SM. Jones also told The Australian he would consider a comeback. However, it is unlikely that such a move would result in him running a breakfast show against his 2GB replacement, Ben Fordham.

The likelihood of a return would also depend on whether a company believes it can still get support from advertisers with Jones back on air.

Jones announced his exit from 2GB last May after more than 15 years dominating Sydney breakfast radio. His exit followed several years of ill health and a sponsor boycott due to a string controversial comments aimed at prominent women including former Prime Minister Julia Gillard and New Zealand leader Jacinda Ardern.