Tech billionaire Mike Cannon-Brookes is ready to renew his stoush with AGL Energy’s board, after the company rejected all but one of the candidates hand-picked by its biggest shareholder.

In its annual general meeting (AGM) notice, released on Friday, AGL’s management put forward the names of the four new directors it was backing to join the board. That list includes only one of the names put forward by Cannon-Brookes, through the Galipea Partnership – a company associated with Grok Ventures.

AGL’s board said that it would support the appointment of former Tesla executive Mark Tidwell as a director, while rejecting the appointment of the other three candidates – including former ESB chair Kerry Schott, Australian Financial Complaints Authority chair John Pollaers, and Metcash and CSR director Christine Holman.

“The board has recommended that shareholders vote in favour of the appointment of Mr Mark Tidwell as a director, and against the appointment of the other candidates nominated by the Galipea Partnership,” AGL chair Patricia McKenzie said in the notice of meeting.

“In particular, while each of Dr Kerry Elizabeth Schott AO, John Carl Pollaers OAM and Christine Francis Holman are respected directors in their own right, their skill set either is already present on the board or is not aligned to the priority skills that are being sought through the current renewal process,” she added.

McKenzie cited Tidwell’s skills and experience, developed at Tesla as director of energy programs, as being valuable to AGL’s board. 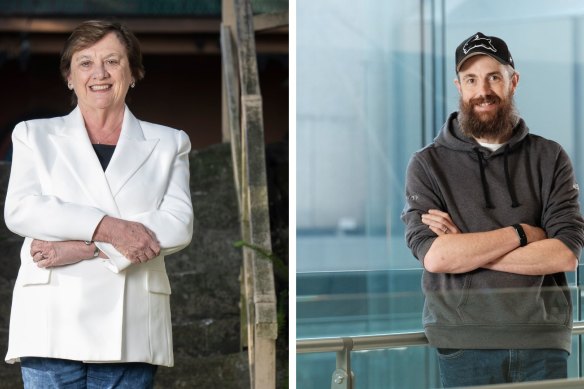 AGL chairman Patricia McKenzie and billionaire Mike Cannon Brookes are at loggerheads over the composition of its board. Credit:AFR

The composition of the AGL board is the latest flashpoint in its tussle with Cannon-Brookes, who has already successfully scuttled the company’s planned demerger of its emissions-intensive coal-fired power stations from its retailing and renewable energy assets.

AGL has subsequently committed to turn off coal by 2035, up to 10 years sooner than previously planned.

A Grok spokesman said it will Grok will engage directly with AGL’s 150,000 shareholders in the lead up to the AGM to explain the need for these candidates to “undertake the monumental amount of work required by the board”.

The endorsement of Tidwell for a board role is not enough for the activist investor who says the incumbent directors do not have the breadth of skills required to execute on this transition.

“It makes no sense to us – or a growing list of shareholders – that the board is rejecting highly qualified, independent directors who are committed to helping them make AGL the leading green gentailer in the world,” Grok said.

This week, another investor – high-profile fund manager Geoff Wilson – also called for the board to support the Grok candidates and rejected suggestions they would not be independent.

McKenzie said the skills of the rejected candidates were not needed.

“Given the depth of energy market and transition experience already represented on the renewed AGL board, the board is of the view that appointing all four of the Grok candidates would not add to the overall effectiveness of the board,” she said in a separate letter to AGL shareholders.

She also said the limit of ten directors for the board means that appointing all of Grok’s candidates could limit the board’s ability to bring on additional directors with other areas of expertise. If the candidates supported by the AGL board are elected, it will have 6 directors.

McKenzie was appointed as the board’s chair last month. She replaced Peter Botten who resigned after AGL’s long-held demerger plans to split its coal-fired power stations from its retail arm were derailed by a campaign led by Cannon-Brookes.

AGL also announced at the time that the former chair of the Clean Energy Council, Miles George, would join the board. He is one of the new directors standing for re-election at the AGM, along with Graham Cockroft and Vanessa Sullivan.

The AGL board has experienced a purge over the last year with Botten, Graeme Hunt Jacqueline Hey and Diane Smith-Gander all departing after the failed demerger.