“The fact that Trumka was relatively indifferent to Biden’s move to kill thousands of union jobs is troubling and revealing,” Greszler said. “It shows that unions don’t actually represent workers’ interests, but rather union leadership’s quest for power.”

Trumka expressed displeasure with the pipeline project cancellation but also praised Biden as possibly “the best union president we ever had” during an “Axios on HBO” interview that aired on Sunday. 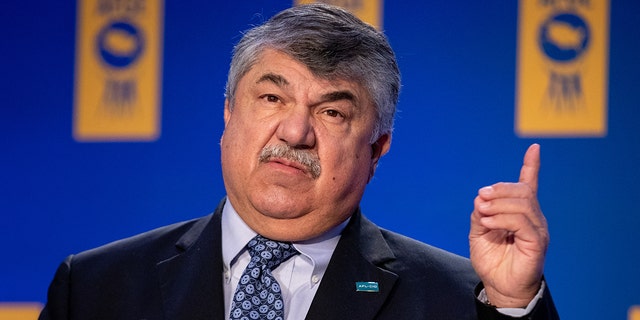 “I wish he hadn’t done that on the first day because the Laborers International [Union] is right,” Trumka told Axios. “It did and will cost us jobs in the process. I wish he had paired that more carefully with the thing he did second by saying, ‘Here’s where we’re creating jobs.'”

Labor groups have said Biden’s Day One decision to nix the Keystone pipeline quickly eliminated 1,000 union jobs and could kill 10 times more in construction jobs that were expected to be created by the project.

“It suggests that he’s going to get something in return for sitting silent on a matter that is negatively impacting [workers],” Greszler said, referencing union-backed policies like a $15 federal minimum wage and the PRO Act. 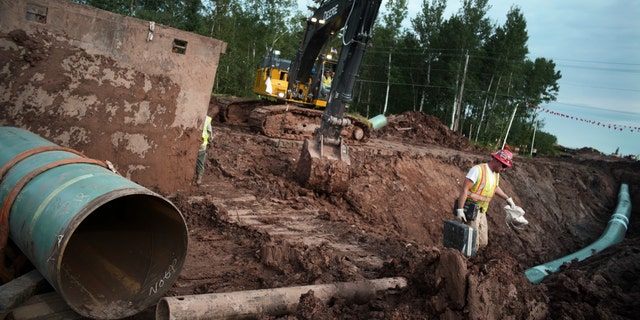 In an Aug. 21, 2017 file photo, workers make sure that each section of the Enbridge replacement Line 3 that is joined passes muster in Superior, Wisc. (Richard Tsong-Taatarii /Star Tribune via AP)

“There’s a gap between what they’re promising and what’s actually possible,” Greszler said. “You can talk about these green jobs, but it’s going to take years, if not decades, to actually generate these jobs.”

Daniel DiSalvo, professor of political science at the City College of New York, told Fox News that he doubts the Keystone XL cancellation will be a turning point for union relations with Biden and the Democrats. Once economic growth post-pandemic kicks in, unions will forget about the loss, DiSalvo said.

“That’s going to assuage everyone if you have job growth,” he said.

However, DiSalvo said there’s an “inherent tension” between the union leaders and environmentalists, and Biden is trying to court both.

“Biden, depending on how ambitious his green, environmental agenda becomes, that could act as a constraint on growth,” DiSalvo said, adding that while some individual union members may abandon Democrats, union leadership tends to be intertwined with the Democratic party.

“When is it that the Biden administration is going to let the thousands of fossil fuel industry workers, whether its pipeline workers or construction workers who are either out of work or will soon be out of work because of Biden’s EO, when it is and where it is that they can go for their green jobs?” Doocy asked.

“As the president has indicated when he gave his primetime address to talk about the American Rescue Plan, he talked about his plans to also put forward a jobs plan in the weeks or months following,” Psaki eventually responded. “He has every plan to do exactly that.”

The AFL-CIO did not respond to a request for comment.