A2 Milk is hoping to join rival infant formula maker Bubs Australia in the race to patch up the shortage of infant formula in the US with shares in both companies soaring on investor optimism of more deals ahead.

Dual-listed A2 Milk chief David Bortolussi confirmed the New Zealand-headquartered company last week submitted an application to the US Food and Drug Administration (FDA) that is still pending approval. 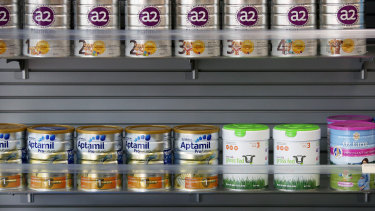 A2 Milk is hoping the US FDA will approve its bid to supply the US market with product to help ease an infant formula shortage.Credit:Bloomberg

“We stand by to assist the US government, FDA and our trade partners to help parents and caregivers access high-quality a2 Platinum infant milk formula from New Zealand during this difficult period subject to our stock availability,” Bortolussi said.

A2 Milk already supplies three of its products (none of which are infant milk formula) to 27,000 stores across the US.

Over the weekend, US President Joe Biden announced that goat milk product maker Bubs Australia would send 1.25 million tins, or the equivalent of 27.5 million bottles, of infant formula to the US. Bubs secured FDA approval on Saturday morning.

The US has been experiencing an infant formula shortage for months after the country’s largest formula manufacturer, Abbott Laboratories, was forced to close its Michigan plant in February after four babies fell ill from bacterial infections after consuming their formula. Two of the four later died.

Bubs Australia chief Kristy Carr said the 1.25 million tins preparing to be shipped would supply the US market for roughly three months and was “just the beginning”.

“This will be a very accelerated and material starting point for us,” Carr told The Herald and The Age. “This is, from a business standpoint, a once-in-a-lifetime opportunity.”

The $412.4 million listed company is coming first in the race of international infant formula companies vying for exposure in the US after the 40 per cent hole left by Abbott Laboratories. The US is the world’s second-biggest infant formula market after China.

Bubs Australia will open up a second production line in its Dandenong facility and look at opening up a third to triple capacity. 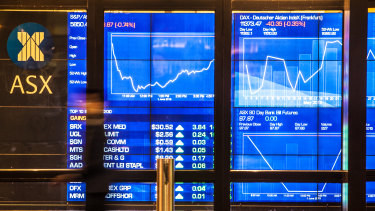 The strong share price performance for Bubs and A2 Milk comes as the ASX unveils a new benchmark index tracking food producers and agribusiness companies.

“All these factors are driving demand for capital,” Chapman told this masthead. “Companies involved in the sector need money to invest, to address all of these big challenges they’re facing.

“That means we [ASX] need to connect investors with those companies,” he added.

Data provided by ASX showed the ASX’s Agribusiness Index would have outperformed the benchmark ASX 200 between January 2017 and May 2022 at 40 per cent compared to 23 per cent.

“During times of market stress, the agribusiness index is a much steadier, better-performing sector. It stands to reason – everyone keeps needing to eat,” Chapman said.

“If you’re an investor and wanting better returns with less volatility, this is a sector that you should be looking at. That’s a key message.”