A KFC worker filed a complaint detailing the violence and harassment she says she faced on the job. And she’s not the only hourly worker facing similar issues.

Laura Amaro filed a complaint Monday with CalOSHA, a state agency charged with ensuring workplace safety, and the Los Angeles County Public Health Department saying that she faced injury, threats, and harassment at her job.

Amaro says she was shot in the chest with a BB gun while working at the KFC’s drive-thru area in late February.

According to the complaint, Amaro was bleeding and had to pull a bullet out of her skin.

“At first the shift leader said she was going to call an ambulance to get me medical attention, but she called the store manager first,” reads the complaint, viewed by Insider. “The store manager told her that I was only going to have a bruise and not to call the paramedics, so she just gave me alcohol and a band-aid.”

Amaro says she was expected to work for six more hours, finishing her shift at 1 a.m. The next day, she told the shift leader she had to miss work to see a doctor. In the following weeks, the shift leader “retaliated against me by cutting my hours and changing my shifts so I cannot spend time with my daughter at home,” according to the complaint.

A KFC representative told Insider that it is committed to treating customers and employees with honesty and integrity, and creating a safe workplace. According to the representative, the Los Angeles location in question is “well-lit, includes extensive security cameras for monitoring employee safety, and it is protocol that back-of-house doors remain locked.”

“Any claims of retaliation or mistreatment are investigated,” the KFC representative said. “This franchisee puts a particular emphasis on employee wellbeing by providing training and anonymous feedback mechanisms for the protection of its team members, including an anonymous employee reporting hotline.”

Amaro says she faced threats and harassment, including from anti-mask customers 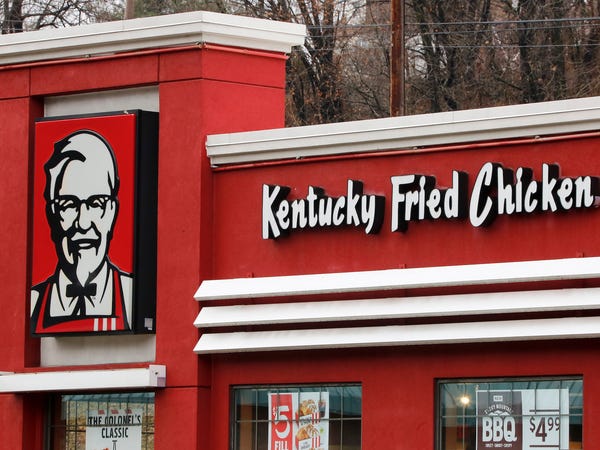 While being shot with a BB gun and having her hours cut helped convince Amaro to file the complaint, she says she faced numerous instances of harassment and violence on the job.

Amaro said that during her six months working at the KFC, she was cursed at by customers who were angry about having to wear a mask.

“You tell them to put on their mask and they get upset and say, ‘Oh I don’t have COVID,”‘ Amaro said. “When you say, I’m sorry, you can’t come in here if you don’t have a mask … they get mad.”

One customer threw a drink in Amaro’s face when the location ran out of chicken breasts, according to the complaint. Another time, Amaro says she and a coworker had to stop an angry customer from entering the KFC location with a baseball bat.

“When I was hired, the shift leader told me, ‘To work here you have to have a lot of courage, because the customers will throw drinks at you and curse at you,’ but that should not be acceptable at a workplace, especially to the extent of getting shot and suffering bodily injury,” the complaint reads.

Amaro said she was also concerned about catching COVID-19 on the job, in part because she was not alerted when coworkers became ill.

“Out of respect for employee privacy and in compliance with HIPAA standards, team members are not proactively informed about individuals who have tested positive for COVID-19; however, any employee who is exposed or in proximity to the individual is notified and provided testing (paid for by the franchisee), as well as paid time off while employees are quarantined and awaiting results,” a KFC representative said. “In this case, this particular employee had not been exposed to any team members who tested positive for the virus.”

Additionally, Amaro said, social distancing was difficult, as the store was small and employees frequently have to work in close quarters. While some fast-food chains screen workers for COVID-19 symptoms, Amaro said that such practices were not mandatory at her location.

A KFC representative said that the chain provided strict guidance around COVID-19 safety and cleanliness, including increasing the frequency of cleaning and sanitizing, providing masks and gloves for employees, and requiring social distancing “in lobbies and back-of-house wherever possible.” When a positive case is detected, the representative said, the location undergoes additional sanitation.

Fast-food workers’ jobs can be dangerous, especially during the pandemic

Harassment and even violence on the job are unfortunate realities for many restaurant workers.

Employees at chains including McDonald’s, Waffle House, and Chili’s have faced assault after trying to enforce COVID-19 safety precautions over the last year. Last summer, some restaurants decided to shut down dining to protect workers from harassment.

Anti-mask violence even prompted the CDC to issue specific guidance on how to protect retail and restaurant workers from customers.

“In 30-plus years of studying retail and crisis situations, we have never seen a situation of customers being so rude to hourly employees,” Larry Barton, a professor of crisis management and public safety at the University of Central Florida, told Insider’s Mary Hanbury in May.

Even before the pandemic, fast-food workers faced harassment and violence.

A 2015 survey of almost 1,500 fast-food workers found that 12% reported they had been assaulted at work in the previous year. According to the same study, 87% had been injured at least one time at work in the past year.

In 2019, the most recent year the Bureau of Labor Statistics provides data, 99 people working in food preparation and serving jobs died from fatal work injuries. 100 workers died in 2018, and 89 died in 2017.

Amaro said that management needs to put less pressure on workers to speed up drive-thru times, and more emphasis on safety. She wants the location where she continues to work to hire a security guard, and for management to call the paramedics if there is an injury on the job in the future.

“I still have the wound,” Amaro said. “My chest still hurts, and my shoulder does too.”