One definition of stupidity is doing the same thing over and over again but expecting different results.

Neither Bain Capital nor Virgin Australia chief executive Paul Scurrah appear stupid, so it is probable that either their vision for the new Virgin wasn’t articulated effectively, it has been misinterpreted or there are strategic reasons for the way the airline's post-administration strategy was described. 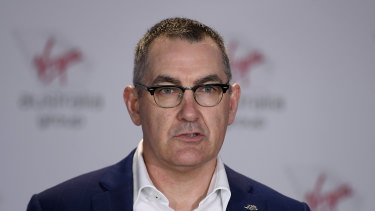 The alternative explanation – that they are over-estimating Virgin’s strengths as it emerges from administration, or under-estimating Qantas’ – would almost inevitably lead to Virgin’s failure, for the second time.

The fuzziness around Virgin’s planned positioning came from Scurrah’s comment that Bain had "walked back" its original plan to shift Virgin downmarket and re-position it as a "hybrid" carrier, downmarket of Qantas but up-market of Jetstar.

That, and Virgin’s planned retention of its lounges, has been interpreted as a signal that the new Virgin plans to compete head-to-head with Qantas for corporate business.

Virgin’s previous attempt to challenge Qantas’ stranglehold on corporate business, with gilded lounges, valet parking and its own version of Qantas’ chairman’s lounge, resulted in bloated costs and its own failure.

Reprising that attempt, even with a cost base eviscerated by the administration process – a third of Virgin’s staff will be shed – would produce the same ferocious response from Qantas. Its dominance of corporate travel is the core of the business model for the Qantas brand and it has demonstrated it is prepared to lose whatever it takes to defend it and its wider group’s domestic market share.

While Virgin will have a much-reduced cost base, Qantas isn’t exactly standing still. It announced in June that it would carve $15 billion of cost outs of its business, with $1 billion a year of on-going benefits.

Qantas has a margin advantage over Virgin as a result of its hold on the corporate market which recent history suggests is structural. That also suggests that an attempt to take share from it via a price-driven strategy would be futile, and very costly.

Bain is a private equity business. It could be expected to be – as Virgin Blue’s original management were and Scurrah appears to be — pragmatic and profit-driven, not seduced by the peculiar allure of the industry into an ego-driven ambition to displace Qantas’ dominance of the pointy end of planes.

Whatever strategy Virgin adopts, the next two or three years are going to be tough, and bloody, for both it and Qantas. If it were to pursue the wrong strategy, they could be tougher, and a lot bloodier.

While Scurrah made it clear that Virgin wasn’t going to retreat to its roots as a low-cost-carrier, that was also never a realistic option. There’s not sufficient room, or profit, for Virgin to compete directly with Jetstar – a formidable low-cost carrier – for low-margin leisure volumes.

Whether you call it a "hybrid" or not, the obvious positioning for Virgin was, and is, in the space between Qantas and Jetstar, using its newly-reduced cost base to offer better value than Qantas and a better experience, at a slightly higher cost, than Jetstar.

That wouldn’t be a return to the original Virgin Blue positioning but would be very similar to the "New World Carrier" strategy Virgin adopted after Qantas’ launch of Jetstar and which led to a very profitable period – before Virgin decided to try to challenge Qantas directly.

That strategy was built on Virgin’s cost advantage over the Qantas brand and no material disadvantage relative to Jetstar. 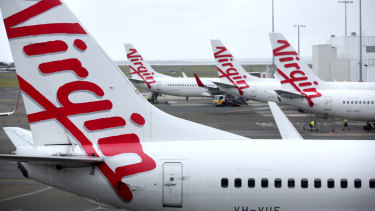 Scurrah said Bain had “walked back” from plans to make Virgin a “hybrid” airline. Credit:James Alcock

It was a value-based, not price-driven, shift into a better mix of margins and profitability that carefully targeted small and medium-sized businesses, along with price-conscious full-fare passengers, rather than Qantas’ corporate heartland.

Retaining a two-class service and business lounges is important to not just preserving Virgin’s appal to SME customers but also to maximising the value of its most valuable asset, the Velocity loyalty program.

The administration will enable Scurrah to do what he might have wanted to when he was appointed CEO last year but was constrained by the existing agreements with employees and suppliers.

Until the creditors’ meeting to vote on the sale of the airline to Bain next month, however, he needs the support of the employees and unions, who will provide the largest number of votes at that meeting. He might also want to renegotiate Virgin’s enterprise bargaining agreements with the unions.

That might explain why he has backed away from references to a hybrid model, talked about aspirations for adding back 2000 employees in a more normal environment, floated the eventual resumption of long-haul international operations, didn’t discard the possibility of reviving the Tiger brand and was vague about the fate of its version of the chairman’s lounge.

In any event, even if genuinely held those are long term aspirations and in the near term – more likely the medium term – there is a pandemic to deal with and the lockdown in Victoria, the cases cropping up elsewhere in Australia, the dire situation in the US and the second wave appearing elsewhere are pushing back the prospect of any return to something resembling industry normality.

The International Air Transport Association is now saying that a return to last year’s pre-pandemic passenger volumes probably won’t occur until 2024 and a recent survey of airline executives found that nearly 70 per cent of them believed the industry would be fundamentally changed by the pandemic experience.

There are plenty of analysts and executives who believe the pandemic will lead to less travel for face-to-face meetings and more virtual communication even if an effective vaccine is developed and widely distributed.

The Australian domestic market has only token capacity flying at the moment and the likelihood that it will somehow gradually resume business-as-usual and be back to normal by 2021-22 is receding as the virus keeps spreading in the two most critical legs – Melbourne and Sydney – of the "golden triangle" routes of Melbourne, Sydney and Brisbane that make the domestic market one of the most profitable in the world.

Whatever strategy Virgin adopts, the next two or three years are going to be tough, and bloody, for both it and Qantas. If it were to pursue the wrong strategy, they could be tougher, and a lot bloodier.