An unprecedented number of Americans are expected to vote by mail this year. And many of them could face a problem, even if they think they’re doing everything right: They could fill out a ballot before Election Day, place it in the mail and, thanks to mail delays or receipt deadlines, wind up not having their vote counted at all.

Most states don’t count ballots unless they arrive by Election Day, meaning that voters have a shorter window to mail their vote, and any mail delays could render it ineligible. Other states count ballots that were postmarked by Election Day, so long as they arrive within a certain number of days. A majority of voters live in the latter category, since some of those states have large populations, but Arizona, Florida, Michigan, Pennsylvania and Wisconsin ― the latter three having swung the Electoral College vote in President Donald Trump’s favor in 2016 ― all count votes only if they are received by Election Day.

Now, Democratic officials in several states that require ballots to arrive by Election Day are rushing to fix this as they prepare for an influx given voters staying home during the COVID-19 pandemic. Republicans ― urged on by President Donald Trump and the national GOP ― are attempting to block measures that would ensure all votes are counted.

The need for these changes became clear as mail delivery slowed dramatically due to changes instituted by the new Postmaster General Louis DeJoy, who was appointed to the position after making major political donations to support Trump. After DeJoy’s appointment, the Postal Service warned 46 states in August that it may not be able to deliver all mailed ballots on time in November.

Ultimately this fight could decide the presidential election. Each of the Rust Belt states that just barely swung for Trump in 2016 has a strict Election Day receipt deadline and face lawsuits to change that. 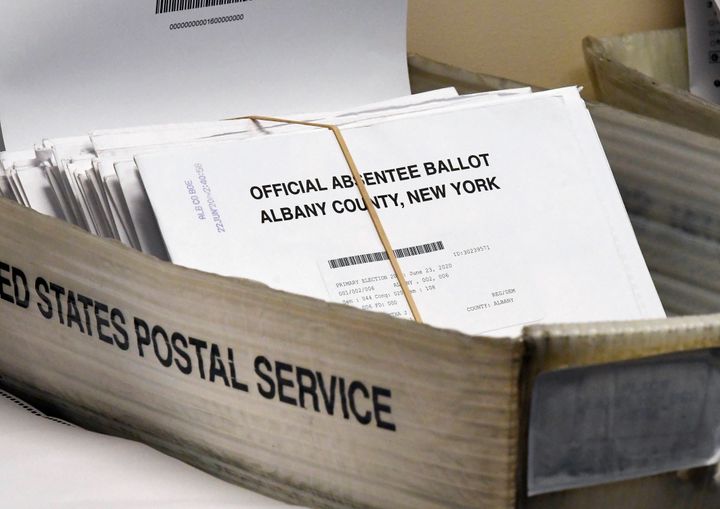 On Tuesday, the Supreme Court of Pennsylvania granted a rare special request to take up cases that seek to expand both the use of drop boxes for absentee ballots and the ballot receipt deadline.

The court granted the request on behalf of Secretary of the Commonwealth Kathy Boockvar (D) after she and Gov. Tom Wolf (D) submitted a court filing in August arguing for the need to extend the ballot receipt deadline beyond election day after the Post Office warned it may not be able to deliver mailed ballots on time in November.

“To state it simply: voters who apply for mail-in ballots in the last week of the application period and return their completed ballot by mail will, through no fault of their own, likely be disenfranchised,” the filing states.

In Georgia, a federal judge ruled on Monday that the state must accept mailed absentee ballots that arrive up to three days after Nov. 3 so long as they were postmarked by Election Day. If it stands, it would make Georgia the 22nd state to have a post-election ballot receipt deadline, and fifth to extend ballot receipt deadlines this year. But the state’s Republican Secretary of State is appealing the decision.

“Allowing voters to vote [absentee] on Election Day and having their ballots count is just another way to increase the number of people who can be involved in the process, really, at any time, but particularly in the uncertainty of this year,” said Sylvia Albert, director of voting and elections at the nonpartisan nonprofit Common Cause.

A 1% rejection rate may sound like an acceptable number, but if history is any guide, it could determine who wins and who loses elections from the White House on down.

Despite losing the popular vote by nearly 3 million votes, President Donald Trump eked out tiny victories over Democratic candidate Hillary Clinton in 2016 in Michigan, Pennsylvania and Wisconsin to win office. Trump’s victories ranged in size from a low of 0.23% of all votes cast in Michigan to a high of 0.77% in Wisconsin. 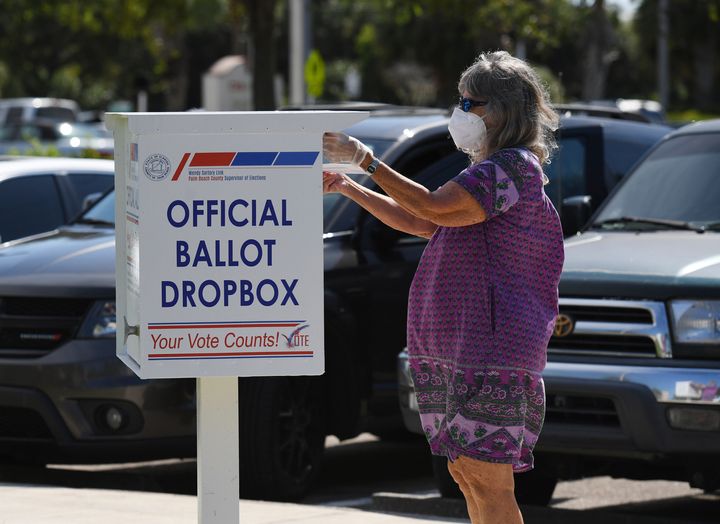 Supporters of extending the ballot receipt deadline in Pennsylvania argue that it wouldn’t just help voters, but also the county Boards of Elections. During the state’s primary elections in June, the county boards struggled to fulfill the record number of absentee ballot requests in time leaving thousands of voters without absentee ballots they requested.

“We were getting so many questions and complaints from people right up to the primary election day about having not received their ballot despite having applied for one,” Sara Rose, senior staff attorney at the Pennsylvania chapter of the ACLU, said. “[The Election Day receipt deadline] makes it difficult for the counties to turn around and return the ballot to the person who requested it in time to give them time to vote.”

The brief filed by Boockvar and Wolf leading to the state Supreme Court grant cites the tens of thousands of ballots cast in the state’s June 2 primary election that arrived through the mail after the Election Day ballot receipt deadline. Those votes would have been rejected due to the deadline were it not for an executive order issued by Wolf and court rulings in a handful of counties.

The court case is the most likely way that the deadline could be extended in Pennsylvania as Republicans in the legislature refuse to pass legislation to even give the county Boards of Election more time to verify ballots without attaching poison pills. The state House of Representatives passed a bill on Wednesday that increased the speed at which absentee ballots could be verified, but also banned the use of drop boxes to collect those ballots.

The same problem presents itself in Michigan. State courts in Michigan ruled against a lawsuit that sought to expand the deadline to include postmarked ballots received a few days after the election. The plaintiffs in that case cited the 6,400 Michigan voters whose absentee ballots were rejected in the state’s Aug. 4 primary. The courts’ ruling said that the issue should be left to the Michigan legislature to decide.

But the Republican-controlled legislature refuses to advance legislation that would change the ballot receipt deadline. Secretary of State Jocelyn Benson (D) endorsed HB 5987, a bill proposed by State Rep. Vanessa Guerra (D) to do just that, but it remains stuck in committee.

And it’s the same story in Wisconsin where the heavily gerrymandered Republican legislative majority refuses to pass any legislation that could ameliorate problems the state may face from a record number of absentee ballots in November.

Those problems are well known, as the state held the first U.S. primary election during the pandemic on April 7. Mail delays and delivery errors led to hundreds of ballots never being delivered to election officials and thousands of voters never receiving their requested ballots, according to a Post Office inspector general report.

But Wisconsin’s April 7 primary did show the importance of extending the ballot receipt deadline. A 5-4 Supreme Court decision struck down a number of expansions to absentee voting ordered by a lower court judge, but upheld the extension of the ballot receipt deadline to three days after the election for those with Election Day postmarks. This one change led to tens of thousands of votes being counted that otherwise would not have been.

A similar lawsuit has been filed in Wisconsin to try and extend the receipt deadline for the November election. 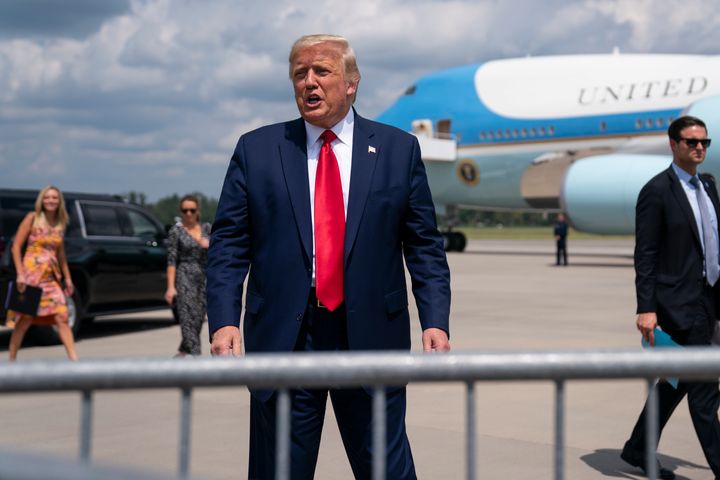 In each case, Trump and the Republican National Committee oppose the extension of any law to aid the delivery and counting of absentee voting ― whether through the mail or delivered to drop boxes. This election will be the most “rigged,” and “fraudulent,” because of the use of mailed absentee ballots, Trump says, with no backing evidence. His campaign is suing in Pennsylvania to stop the use of drop boxes and in Nevada to stop the implementation of a new mail voting law.

Voting rights advocates hope these three states, and others, can join the growing ranks of states extending their ballot receipt deadline.

The states that already accept ballots postmarked by Election Day and received in the days afterwards are of every partisan color.

“There isn’t a rhyme or reason [for which states accept post-election ballots],” Albert said.

New Jersey Gov. Phil Murphy (D) signed a law on Aug. 29 to conduct the state’s fall election entirely through the mail. The law also extended the ballot receipt deadline to six days after the election if the ballot is postmarked by Election Day and two days if it has no postmark.

In Minnesota, election officials agreed to a legal order to extend the ballot receipt deadline to five days after the election for ballots postmarked by Election Day after being sued. A lawsuit in Montana forced officials to agree to an order that would count ballots postmarked by election day that are received up to the same date given for overseas military ballots ― 10 days after the election.

Even though a growing number of states are extending their absentee ballot receipt deadlines, the safest way to make sure your vote is counted is to return it as early in advance of the election as possible.

Related News:
Business News:
Chase vs. Bank of America: How to decide which one is better for you
Pfizer's CEO said the company is working on booster shots that could combat coronavirus variants
Regeneron’s Interim Late-stage Study Shows Antibody Cocktail Effective To Prevent COVID-19
Why Humana went deep on primary care
Ford Shuts Down German Plant Temporarily Due To Chip Shortage
Recent Posts
This website uses cookies to improve your user experience and to provide you with advertisements that are relevant to your interests. By continuing to browse the site you are agreeing to our use of cookies.Ok