“The co-CEO model is usually like watching a car crash in slow motion,” one analyst told me. “It’s hard to have two chefs in the kitchen,” said another. For about a year, Taylor had been sharing the chief executive role with founder Marc Benioff, and many industry watchers concluded that Taylor’s departure meant the arrangement just didn’t work out. It hadn’t before. The year prior to Taylor getting the job, Benioff’s previous co-CEO Keith Block left the company after 18 months in the role. 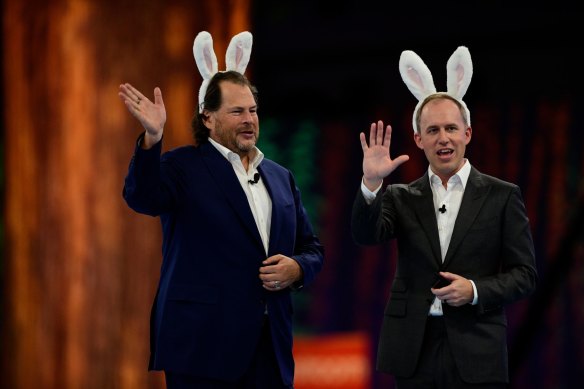 The co-CEO model gets a bad rap for reasons that seem primal: Can two ambitious people really share power in a productive way? Surprisingly, the data suggests that the answer is yes. A Harvard Business Review article from this summer that examined 87 public companies with co-CEOs found that they outperformed, generating an average annual shareholder return of 9.5 per cent versus 6.9 per cent for their comparative peer groups. And tenures of chief executives in both the solo and co-CEO models were about the same at approximately five years each.

Financial performance aside, it’s tough to run a company as an equal partner with a founder. Benioff gave off a whiff of these challenges on the company’s earnings call last week when announcing Taylor’s resignation: “Bret and I are like brothers. I love him very deeply. He’s an incredible person. And one of the great joys of my company has been having him here” — emphasis mine. Even while genuinely flattering Taylor, he alluded to what we all know to be true: Salesforce will always be Benioff’s baby.

The dominant narrative on the Street was that, as co-CEO, Taylor was heir apparent to Benioff, who has been in the job for more than two decades. And therein lies an alternative theory: While it may be tough to run an enterprise alongside an executive with the “my company” mentality, succeeding them in the top job may be tougher still. In other words, Salesforce’s problem is really one of succession rather than of co-CEOs.

This is not unique to Salesforce, or to Benioff. Getting succession right is hard, and even harder for those who take over from longtime CEOs. The stats are in fact pretty grim. A 2019 study from PricewaterhouseCoopers LLP found that, when their tenure was complete, executives succeeding long-standing CEOs had annualised total shareholder returns that were four percentage points lower than their predecessors. And the longer the predecessor was in the job, the worse the new CEO performed. The successors were also significantly more likely to be ousted. With these kinds of odds, it’s understandable why Taylor might have preferred to go off and start a company of his own.

We have some recent examples of the challenges that come with taking over from long-tenured leaders — what PwC typically identified as founders or “visionaries who transformed their organisations.” Over at Walt Disney Co., Bob Chapek was recently ousted and replaced by his predecessor, Bob Iger, who had previously been in the job for 15 years. At Starbucks, Kevin Johnson stepped down earlier this year only to have Howard Schultz swoop back in for his third run as CEO.

We’ll likely have more case studies in the near future.

CEO turnover, which was at a near two-decade high before the pandemic (the most in the history of PwC’s study), slowed as boards opted for stability during the rocky economic stretch that followed. Now CEO departures are picking up again. In due course, they are likely to include changes at some of the most iconic US companies run by longtime CEOs: Warren Buffett at Berkshire Hathaway, Larry Fink at BlackRock, and Netflix’s Reed Hastings (who has a likely successor-in-waiting with co-CEO Ted Sarandos) to name a few. Like Benioff, all can measure their tenures in decades rather than years. It’s a brave executive who will try to fill their shoes.