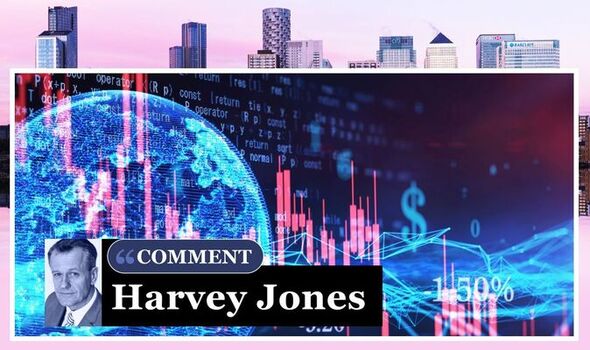 This warning does not come from some headline-grabbing doomsayer but arguably the most respectable financial body of all, the Bank of International Settlements (BIS). This is a body of central bankers based in Basle, Switzerland.

BIS is know as “the central banker’s banker”, an umbrella body for august institutions such as the Bank of England, US Federal Reserve and European Central Bank.

Now they are warning of a crash the scale of which we have never seen before, with a staggering $80trillion (£65trillion) at stake.

To put that into perspective, the global financial crisis was triggered by the collapse of Wall Street investment bank Lehman Brothers in September 2008.

That was the largest corporate bankruptcy in US history but its debts totalled “just” $619billion. That is less than one percent of sums at stake today.

One global financial expert contacted by Express.co.uk said a hidden corner of the finance world has been stretched to an “unsustainable” point, leaving the world in a “dangerous position”.

It is yet another sign that global finance has got far too big for its boots, leaving the world at its mercy.

The threat is lurking in the foreign exchange debt swap market, which is so complex few understand it and there is little control over workings.

Reuters reports that pension funds and other “non-bank” financial firms have more than $80trillion of hidden, off-balance sheet dollar debt in FX swaps.

BIS described as the FX swap debt market as a “blind spot” that risks leaving policymakers in a total “fog”, the latest BIS quarterly report said.

A Dutch pension fund or Japanese insurer could use borrow dollars then lend them as euros or Japanese yen, before later repaying them.

The FX swap market has a history of problems, including funding squeezes during both the global financial crisis and again in the early days of the Covid pandemic, before the Federal Reserve raced to the rescue.

It has grown from $55trillion to $80trillion in a decade, with daily FX swap deals totalling a massive $5 trillion a day.

Non-US banks and pensions funds have twice as much FX swap dollar obligations as the amount of dollar debt that is listed on their balance sheets.

Yet nobody knows where this debt is and how much it is worth in total. The

Vijay Valecha, chief investment officer at Century Financial, said this $80trillion market is a massive concern since it does not appear on balance sheets and is absent from statistics. Effectively, it has gone missing.

“The sheer scale of it raises worrisome questions as a debt load this high is frequently regarded as unsustainable.”

Investors have been “aggressively” borrowing US dollars to invest, a risky strategy known as leverage designed to generate high returns at a time when interest rates were extremely low, he said.

“Now, rising rates and volatile asset prices make high leverage dangerous, even more so because it is hidden.”

The safe haven greenback dollar has rocketed by up to 18 percent this year making dollar debt more expensive. Dollar shortages would force foreign owners of dollar assets to offload them in a global fire sale if short of cash, contributing to downward price spirals, Valecha warned.

The world would be helpless in the face of a meltdown on this scale, yet nobody has any control over the market.

The next financial crisis threatens to be even bigger than the last one.