WASHINGTON ― Four years after promising a 2,000-mile “Great Wall” made of reinforced concrete and paid for by Mexico, President Donald Trump took a victory lap for securing three new miles of steel fence that was paid for by raiding the military budget.

“This is the most powerful and comprehensive border wall structure anywhere in the world,” Trump said Tuesday during a visit to the Mexican border at Yuma, Arizona, where he said 212 miles have been built and that close to 500 would be finished by the end of the year. “Our border has never been more secure.”

In fact, only three of those 212 miles are along parts of the border that previously had no barrier. The rest have replaced existing fencing, a process that began under President George W. Bush and continued under President Barack Obama.

And that fencing, between 18 and 30 feet tall, has proven vulnerable to smugglers and human traffickers using portable, battery-powered saws.

Trump promised from the day he began his campaign in June 2015 that he would build a “great wall” to end illegal immigration from Mexico.

“I would build a great wall, and nobody builds walls better than me, believe me, and I’ll build them very inexpensively,” Trump said in his Trump Tower announcement. “I will build a great, great wall on our southern border. And I will have Mexico pay for that wall. Mark my words.”

Over the coming 17 months, Trump promised many hundreds of times that he would build the wall quickly and at no cost to U.S. taxpayers. Trump said that his wall would be at least 30 feet tall and extend deep underground to prevent people from tunneling beneath it. At a December 2015 visit to Manassas, Virginia, Trump even went into construction details. 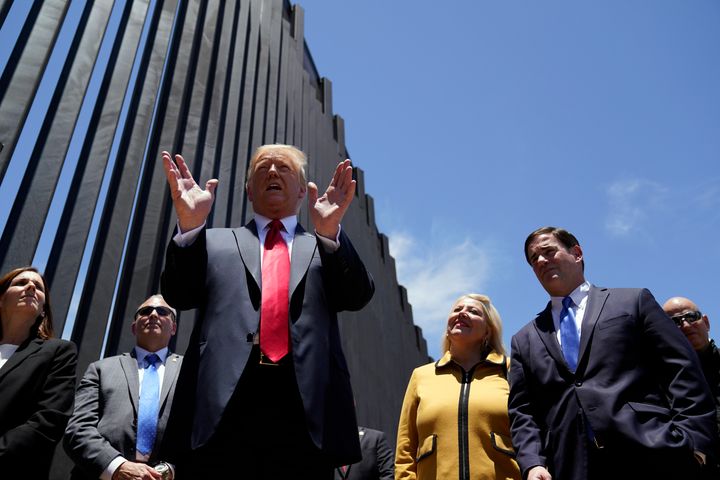 But upon taking office, Trump has not tried even once to get Mexico to pay for the wall ― although he has frequently lied that the revised North American Free Trade Agreement or remittances sent back to Mexico from workers here are somehow funding it.

Indeed, Trump did nothing about the wall at all for more than a year after entering the White House, and only seemed to realize it would not simply build itself after Fox News personalities began criticizing him in the spring of 2018. Trump briefly considered vetoing a $1.3 trillion spending bill because it did not contain the $25 billion he wanted for the wall, but ultimately signed it, even though it contained only $641 million for new fencing.

The same exercise was repeated nearly a year later, after a partial government shutdown Trump forced, but then backed away from. Instead, he declared a national emergency and raided the military construction budget ― diverting money from dozens of projects at bases all over the country and overseas ― to instead build his wall.

Trump on Tuesday blamed Democrats for doing “everything they could to block us” and claimed they supported “open borders.”

Democrats in 2017, however, offered to support $25 billion for Trump’s wall in exchange for his support for legal status for some 800,000 undocumented immigrants who entered the country as children. Trump refused that deal.

“The Republican Party has fully embraced white grievance politics,” said Stevens, who worked for George W. Bush’s 2000 and 2004 campaigns. “The opposite of what we aspired to under President Bush.”

Bush famously angered many in his party by stating that “family values don’t stop at the Rio Grande river,” but also won 40% of the Latino vote during his 2004 reelection. That percentage has fallen into the 20s for Republican candidates in subsequent presidential contests.