A new letter bearing the names of 235 retired U.S. military leaders supports President Trump in what is described as arguably "the most important election since our country was founded."

Retired Army and Air Force generals and Navy admirals were among those who signed the letter, which was released by the Trump campaign Monday. The former leaders warned against the dangers currently facing the nation, and claimed that President Trump is better equipped to handle them than his Democratic opponent.

"As senior leaders of America's military, we took an oath to defend the United States from all enemies, foreign and domestic," the letter says. "At present, our country is now confronted with enemies here and abroad, as well as a once-in-a-century pandemic. As retired military officers, we believe that Donald J. Trump has been tested as few other presidents have and is the proven leader to confront these dangers."

The letter warns that those dangers include the growing acceptance of radical leftist ideology. 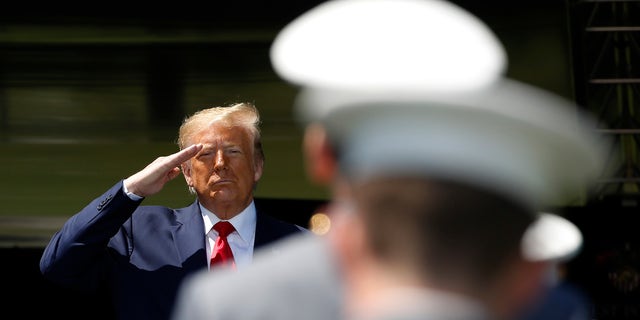 President Trump salutes after speaking to over 1,110 cadets in the Class of 2020 at a commencement ceremony on the parade field, at the United States Military Academy in West Point, N.Y., Saturday, June 13, 2020. (AP Photo/Alex Brandon)

"With the Democratic Party welcoming to socialists and Marxists, our historic way of life is at stake," it says.

The retired leaders went on to claim that the Democratic party's positions regarding border security, the Iran nuclear deal, and policing also threaten U.S. national security.

On top of that, the letter cites military budget cuts under the Obama-Biden administration and warns that "Democrats have once again pledged to cut defense spending, undermining our military strength."

"After years of neglect from the Obama-Biden administration, our service members and veterans have finally found a strong advocate in President Trump," the Trump campaign said in a statement. "The Trump administration has rebuilt the military, completely overhauled the Department of Veterans Affairs, and launched groundbreaking initiatives to assist military families and prevent veteran suicide. In contrast, Joe Biden's record on the military and veterans is one of failure: debilitating budget cuts, failed foreign policy decisions, and an inability to provide our nation's heroes with the quality health care they deserve."

The letter comes after a report in The Atlantic claimed that Trump disparaged military veterans and fallen soldiers. Several officials rejected the accusations, and President Trump denied it, claiming, "Only an animal would say a thing like that.”