Westpac's links to an offshore bank at the centre of a sweeping international money laundering and tax evasion probe have sparked fresh calls for reform of the financial sector’s approach to curbing crime.

The nation's second biggest bank, which was embroiled in a major money laundering scandal last year that forced the departure of its chief executive and chairman, has confirmed it had a "correspondent banking relationship" with Puerto Rico based Euro Pacific until 2018. These relationships allow global payment transfers between financial institutions.

The Age, The Sydney Morning Herald and 60 Minutes this week revealed that Euro Pacific is at the centre of a major multinational investigation for facilitating money laundering and tax evasion and is considered by the Australian Criminal Intelligence Commission an Australian Priority Organisation Target, making it among the highest threats to national security. 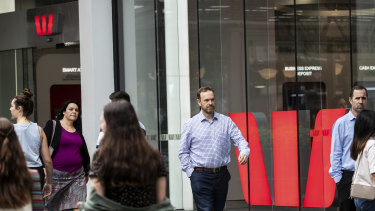 The Puerto Rico institution, which is led by celebrity investor Peter Schiff, has around 400 Australian clients, sources close to the investigation claim. These include the ringleader of the largest Australian tax fraud, Simon Anquetil and convicted drug trafficker turned Hollywood film financier Darby Angel. Mr Angel denied having an account, claiming it was a case of stolen identity, and Mr Anquetil is in prison and did not respond to requests for comment.

Westpac recently agreed to pay the largest fine in Australian corporate history, totalling $1.3 billion, to settle claims by the financial intelligence agency AUSTRAC that it facilitated payments linked to live child sex shows in the Philippines through its correspondent banking relationships

Banking sources say Euro Pacific was not one of the 16 correspondent banks singled out by AUSTRAC in its case against Westpac, which cost chief executive Brian Hartzer and chairman Lindsay Maxsted their positions with the bank.

However, Westpac's links with Euro Pacfic raise questions about the number of problematic partnerships it maintains.

If an Australian wants to transfer money to Euro Pacific, it needs a correspondent bank to process the payment. These banks are responsible for flagging suspicious payments with AUSTRAC. Until 2018, Westpac was the only Australian bank partnering with Euro Pacific.

A former AML officer within Westpac who spoke on the condition of anonymity said Australian banks' focus on sales over risk management allowed partnerships to be set up without proper vetting.

“There’s always the tension between the sales function,” the employee said. “It really depends on how well embedded those controls are and what sits at the top.”

Mr Schiff is well known for his appearances on financial television and rose to fame after he predicted the Global Financial Crisis, earning him the nickname "Dr Doom". He has publicly rallied against laws designed to stamp out terrorism financing and money laundering and is also a critic of corporate red tape and tax obligations.

Euro Pacific's president, Mark Anderson, filed for personal bankruptcy in 1995 and has a history of misconduct. He was forced to pay US$96,000 ($133,100) by the US corporate regulator in 2003 after overcharging clients in what prosecutors described as a wilful disregard for corporate laws.

Anti-money laundering expert Anthony Quinn, who has worked at both Westpac and Macquarie, said ownership and control structures for correspondent banks are a key feature major banks should examine when deciding which banks to partner with.

Mr Quinn, who now runs his own firm AML Accelerate, said Anderson’s record should “absolutely” have raised alarms and prompted further investigation of Euro Pacific's operations, including an on-site visit or independent audit.

“You can still deal with these people, but you’re exposing yourself to reputational risks.”

Lenders undertake yearly reviews of their relationships with correspondent banks but are often reliant on news articles or public indications that a partner is a shell bank – one without any physical presence – or involved in criminal activity.

University of Melbourne associate professor Andrew Godwin said banks are responsible for developing their own due diligence policies and called for a “three strikes and you’re out” rule for those that break the law.

“So it’s not just a question of slapping the offenders with a huge fine, but also saying you might lose your license if you do this again,” he said. “My concern is more whether these due diligence processes become box ticking exercises.”

Professor Godwin said banks often treated financial penalties as “the cost of doing business” and there needed to be greater accountability, including criminal prosecution of individuals, for non-compliance.

“Cultures are set from the top,” he said. “There is a role for penalties, but the critical question I would suggest is how do we achieve cultural change and operational change?”

University of Sydney business school associate professor David Chaikin said “tipping off laws” – legislation that prevents banks from sharing information about suspicious customers – had stifled the ability of banks to stop money laundering. He called for these laws to be relaxed to enable greater information sharing between banks and government agencies.

“It would be very easy for them to do this,” Mr Chevis said. “Otherwise you’re going to keep getting banks like Westpac…partnering with dodgy banks like Euro Pacific Bank.”

AUSTRAC chief executive Nicole Rose told senate estimates on Tuesday that her agency was not probing the relationship between Westpac and Euro Pacific, after questioning from Greens senator Nick McKim, though she committed to sharing information with crime agencies if requested. Ms Rose also confirmed no other Australian banks had partnered with the bank, to her knowledge.

Ms Rose flagged there could be reform in the sector to prevent anti-money laundering breaches, like that seen at Westpac, from re-occurring. "We’re looking at how we need to improve guidance, improve education and if indeed we need to, improve legislation," she said.

The Federal Reserve Bank of New York could not comment on specific customers, and the other institutions did not respond to multiple requests for comment.

Euro Pacific issued a statement on Sunday denying any wrongdoing and claiming it complies with all laws. "No one likes to be the subject of negative stories but with your continued support, and with the excellent work of our compliance staff and programs, we will continue to ably serve our international clients with their personal and business banking needs," the bank said.

A Westpac spokesman said the bank could not comment on individual customers but added the bank was enhancing its due diligence process for new correspondent banking relationships.

“The due diligence process includes but is not limited to the review and assessment of various factors such as the geography risk, ownership and management structure, customer base and adequacy of the AML/CTF controls of the correspondent bank.

“Westpac is regularly reviewing its correspondent banking relationships to ensure Westpac has optimum business coverage while managing risk within the portfolio.”