Westpac is suing a financial firm run by a Sydney football personality over an alleged fraud that could cost the bank more than $200 million, after what insiders have blamed on poor internal controls that failed to detect allegedly false invoices.

Westpac launched legal proceedings in the Federal Court on Monday against Sydney-based firm Forum Financial, which is run by Sydney Olympic chairman and entrepreneur Basile Papadimitriou, commonly known as Bill Papas. Mr Papadimitriou is the respondent in the lawsuit.

The Age and Sydney Morning Herald do not allege he is involved in or aware of the alleged fraud. 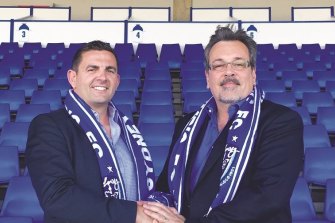 Football personality and entrepreneur Bill Papas, left, is being sued by Westpac over alleged involvement in a $200 million fraud. Credit:Facebook

A spokesman for the bank said no Westpac customers had lost any money at this stage, but an external review has been set up to investigate what went wrong. The spokesman said the bank had issued freeze and search orders and was liaising with the NSW Police and financial regulators, the Australian Securities and Investments Commission and the Australian Prudential Regulation Authority.

One source inside the bank said Westpac held crisis meetings late last week to determine the scale of the fraud after allegedly discovering Forum Finance had created fake invoices to obtain Westpac loans. “People were running around terrified,” the source said.

The source, who couldn’t be identified because they were not authorised to speak to the media, alleged that Westpac loaned money to Forum Finance under the impression the money would then be loaned onto to its own customers.

However, when Westpac contacted Forum’s customers to inquire about the business relationship, it allegedly discovered these customers had not heard of Forum and the invoices related to the deal had allegedly been falsified.

Westpac’s chief executive Peter King described the potential fraud as “sophisticated” and disclosed the bank could lose around $200 million after tax. The source said it was unclear what portion of Forum’s customers were allegedly fraudulent, and the bank’s exposure could be up to $350 million.

Another source within Westpac’s financial crime department, who could not be named because they were discussing sensitive information, said the problem was caused by the bank’s “non-existent” controls around invoice verification.

Mr King said the bank “takes fraud very seriously and will take all necessary actions to protect the interest of the bank and its customers”.

“This is a complex issue, and we are working at pace to address it, including engaging with police and regulators. At this preliminary stage, the potential fraud is sophisticated and appears to have been perpetrated externally,” Mr King said.

Forum Financial was launched in December 2011 to manage printer and copier fleets for businesses, but expanded into account payments and other services, according to its website.

“And at the core of our solutions are our flexible financial agreements, which enable customers to access the latest technology, or change technology as their business needs change — without the need for capital outlay,” the company says.

Mr Papadimitriou and Forum Financial were contacted for comment.