Westpac’s profits have dipped 12 per cent to $3.1 billion in the six months to March due to higher bad debt provisions, but the lender said it was making progress in its turnaround and lifted its dividend.

The banking giant on Monday delivered half-year earnings that were ahead of market expectations, with earnings supported by deep cost-cutting. 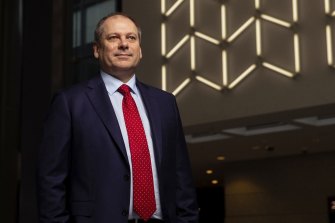 While cash earnings were weaker than a year earlier, when the bank benefited from a cut to COVID-19 related bad debts, earnings were 71 per cent higher than the six months to September.

Chief executive Peter King, who has been slashing expenses as part of a turnaround plan, said the bank’s costs were down 10 per cent compared with the second half of 2021.

“In the first half of 2022, we’ve made steady progress towards our goals. We’re managing through the low-rate environment and making the changes required to become a simpler, stronger bank,” Mr King said.

The board lifted the bank’s interim dividend to 61c, which will be fully-franked and paid on June 24.

Analysts had expected $2.8 billion in cash profits, and a dividend of 59c a share.

Commonwealth Bank will round out the bank earnings season this week, when it delivers a third quarter trading update.