Can Australians be trusted to manage their own retirement money?

Absolutely not, has been the guiding principle of Australia’s now behemoth $3 trillion superannuation industry.

We can neither be trusted to save enough for retirement – the government must forcibly extract 9.5 per cent of our salary for this – nor to manage those funds properly – we must pay a collective $30 billion a year to an opaque and hungry funds management industry to do that. 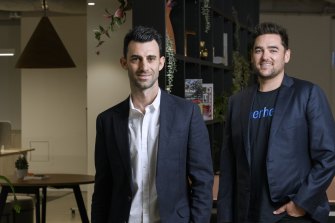 Well, younger Aussies have had enough, says John Winters co-founder of fintech startup Superhero, above the clatter of the coffee machine at a busy café on Hunter Street in Sydney.

While initially launched in September last year as a share trading site, Superhero will soon morph into a super fund – the clue is in the name – which aims to disrupt the superannuation industry by placing power in the hands of ordinary Australians to easily direct where they want their super contributions invested, be it in tech stocks, exchange traded funds (ETFS) or Superhero itself when it IPOs in the next 12 to 18 months.

It will be the first time Aussies can easily direct their own super investments outside of the high cost self-managed super fund environment or the self-directed investment options offered by some industry funds.

We are joined at the table by Winter’s partner in crime, Wayne Baskin, who is also the deputy CEO of online book retailer Booktopia.

I had suggested lunch at a classy restaurant, but the duo’s PR person told me they’re more of a Guzman and Gomez at their desks kind of duo.

It’s a departure for Winters, who cut his teeth in the world of traditional stockbroking and wealth management. It was while working at Shaw and Partners that Winters was tapped to lead the initial public offering (IPO) of Zip Co. and caught the startup bug.

“I’d been in broking since 2007 and I’d always loved the business side of it rather than just the trading side,” explains Winters.

“I moved to Perth and Larry Diamond, who is a good friend of mine…he was at Macquarie and he introduced me to the guys at Macquarie in Perth.”

That’s Larry Diamond, the co-founder of Zip, which today has a market capitalisation above $4 billion.

How does Winters know him? Winters demures: “He’s just a friend.”

“Fast forward a couple of years, and I’d moved back to Shaw [and Partners] and he needed to raise capital and we raised the capital for him.”

Recently, Diamond was among a handful of investors, including Afterpay co-founder Nick Molnar and billionaire Alex Waislitz, to chip in $25 million of capital for Superhero.

Baskin also has friends in fintech high places. A software engineer by training, Baskin says he met “good friend” Molnar after advising him on the redesign of Molnar’s family jewellery website.

“He came to me after a few years of me giving him that advice and said ‘mate, I want to set up this business where you can pay for things – after. You know, you can get your goods and pay for them after.’”

Along with Afterpay co-founder Anthony Eisen, Molnar asked Baskin to be the “tech guy” for their fledgling business.

“I said, ’guys, look, I’ve got this Booktopia listing, I can’t do it now. But after the listing, I’ll join you. Maybe you know, you would have grown a bit by then and I can come on board. I think the rest is history…I missed out on being a founder there.”

It was not a mistake Baskin planned on making twice. So when Winters, his friend of more than a decade – they met through their girlfriends now wives – approached him about being the “tech guy” on his idea, he didn’t hesitate.

And what was that idea, exactly? Winter’s explains:

“Throughout the process of listing Zip, all of their employees were coming to me and saying ‘hey, can I set up an account? I want to buy some Zip.’ And I would send them the 100 page booklet with the financial services guide and an 8 page account form that they would have to fill in and sign.”

“So they had to print it and they were like ‘we don’t even have printers here. Like, what do I do with paper?’ And I was like: ’Go down to the chemist, get a certified copy of your drivers license and then post that to the office.”

Then, Winters would break the news about his firm’s minimum brokerage charge of $125: “And they were like, ‘but I only want to buy $1000 worth of shares, that’s like 12.5 per cent commission’.”

“So, I was like, how do we speed up the on-boarding process? How do we make it really cost effective? But then the other question that they were asking was ‘I don’t have a huge amount of cash, how can I use my superannuation to invest in what I really want to invest in?’ And the answer was unless you have $500,000 to set up a SMSF you can’t. So that’s where the idea of Superhero came from.”

It’s a sudden about-face for a generation who have traditionally had trouble engaging with the idea that superannuation is “real money” . But, spurred on by ultra-low interest rates and the rise of low cost exchange traded funds, a new generation of investors is beginning to seize control of their money.

Superhero has been written up as the Australian answer to Robinhood, the US share trading platform which famously facilitated the short-selling spree on video game store Gamestop, before it had to step in and put a halt to trading.

“That’s the story everyone wants to write,” says Winters, who concedes there are similarities between the custodial ownership arrangement of US share platforms and Superhero’s direct share platform offering.

But that’s where the similarities end, says Winters. Unlike Robinhood, which earns income from exchanges to direct trades to them, Superhero – like all Australian brokers – must pay the Australian Securities Exchange a fee every time it trades. To reduce the cost, Superhero bundles trades and holds all shares under a single “HIN”. This allows it to charge ultra cheap brokerage fees of $5 and $0 on ETFs.

The Superhero super product will be part of OneSuper, an APRA regulated super fund. Winters and Baskin are yet to reveal the fee structure for their super offering, but hint it will be well below the industry average of around 1.3 percentage point of funds invested.

In addition to a broad fund balance fee, fund members who choose to buy and sell shares will also incur brokerage fees – albeit at a lower rate than the $15 charged in industry super direct investment options.

This has led to some concern about excessive investment churn and fee-burn by younger, inexperienced investors.

But Winters says it is a misnomer that younger Aussies are using the Superhero share platform – and competitors – to gamble their money, or trade excessively.

For starters, “we’re not targeting younger people. The average age on the platform is about 37 so it is actually older Millennials and Generation X’s.”

“People are coming on and setting up a portfolio for the long term, which is actually really interesting because there’s a lot of media out there saying typically Millennials are day trading – we don’t see that.”

“We see so many people come on and they buy three different ETFs and they don’t sell them. They come on, they buy them and they just sit.”

At the ages of 38 and 37 respectively, Winters and Baskin are admittedly pushing the envelope to lead the Millennial investor revolution. And they’ve taken a deliberately conservative approach to what investments members of their super fund will be able to choose.

“You mentioned people may invest and potentially do silly things,” says Winters. “Through the rise of Afterpay and Zip, we’ve seen a lot of the lessons that they’ve gone through and there’s a whole thing about responsible lending. We’ve taken a view that we should have some sort of ‘reponsible investing’.”

“We want to promote long term investing through the Superhero platform,” adds Baskins. “We agree with what you’re saying. So, what we did was we made it zero dollars to buy an ETF but it’s $5 to sell. So what we’re trying to do there is promote long term investing in ETFs, because for the Average Joe – and I’ll call myself the Average Joe investor – that’s the right place for me to be putting my money, rather than trying to guess the market.”

All fund members will also have 25 per cent of their money immediately channelled into a balanced global index fund, which at this stage is the Vanguard diversified balanced index ETF, forcing a degree of diversification.

No more than 25 per cent of funds can be put into a single stock holding. Members will only be able to invest in ASX300 companies and will be precluded from investing in some active and leveraged ETFs.

What do the regulators make of Superhero? Winters says they have jumped through all the regulatory hoops required by both ASIC and APRA. “They’re comfortable with the controls that we’ve put in place and we have done more than we’ve been asked to do.”

Super advocates have suggested to Superhero it should add a benchmark in its app to allow members to see if they are significantly underperforming the broader market over a time period. That’s because members of self-managed and self-directed super funds will be excluded from the protections afforded by the government’s new test designed to weed out underperforming funds.

But for Winters, it all comes down to choice:“What do people actually want to do with their money? And that’s the question the industry is reluctant to ask because they lose control. The industry doesn’t want to lose control of peoples’ money.”