ANZ Bank chairman Paul O’Sullivan has admitted the major bank failed to meet the surging demand for home loans during the pandemic property boom, and pledged ongoing investment in automation to fix the issue in the coming months.

Speaking at the bank’s annual general meeting on Thursday, Mr O’Sullivan said it had been a disappointing year for shareholders after sluggish approval times caused ANZ’s mortgage book to shrink in the past year.

A reliance on manual processing of applications from mortgage brokers caused ANZ to be caught under prepared during the housing boom brought on by historic low-interest rates, government stimulus payments and increased savings during pandemic lockdowns. 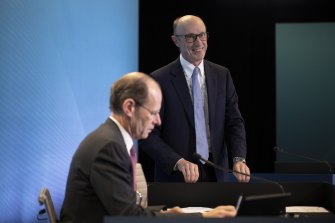 During the three-hour meeting, shareholder Wolfgang Frank was one of many who queried the bank’s inability to meet surging demand. “How can a major bank such as ANZ have processing issues in a longstanding and basic product such as housing loans resulting in a material drop in market share?”

ANZ remains a laggard in mortgage approvals, with complex loans from brokers taking around 32 days to approve and 10 days for first home buyers. Mr O’Sullivan said changing this was now a top priority for the board and management and pledged to regain market share in the second half.

“Let me be frank, we got it wrong. Although we expanded capacity, we didn’t expand capacity enough. And as a result, we lost market share to those who could process it,” Mr O’Sullivan said.

“We have spent a lot of time at board and management understanding this issue. There has been significant work done to bring in new processes, new ways of handling things and to look externally at best practice, so we can learn from that and improve.

“Yes it’s been a disappointing performance, but there has been a lot of work done to get us back on track.”

ANZ chief executive Shayne Elliott said demand for home loans will continue to grow at modest levels of between 5 and 6 per cent next year, but reminded shareholders not all mortgages can be approved in 30 minutes because of responsible lending laws.

“We have an obligation not just to process the loan, but to ensure and take reasonable steps to ensure that, quite rightly, that the applicant has the means to repay the loan without undue hardship.”

Around one-third of ANZ’s new mortgage applications come from self-employed or small business operators, Mr Elliott said, which complicates the bank’s obligations to judge loan affordability. “Of course small business operators don’t have a payslip, so in order to be able to assess them for a home loan, it’s a little more complicated and it takes a little bit more time.”

The major bank was also forced to defend its position on climate change, after shareholders accused the lender of “greenwashing” by providing finance to companies expanding fossil fuel production, with oil and gas majors Santos and Woodside among ANZ’s institutional customers.

Mr O’Sullivan said the bank was committed to encouraging its customers to reduce emissions and simply abandoning heavy emitters would mean other less responsible lenders would replace them.

A shareholder resolution by activist organisation, Market Forces, which asked ANZ for greater transparency on its transition plan and greater commitments to divest from fossil fuel producers was supported by around 15 per cent of shareholders, despite an ‘against’ recommendation from major proxies ISS and Glass Lewis.

“By making loans to companies that clearly have no interest in aligning with the Paris Agreement or net zero by 2050, that are clearly hell-bent on pursuing new and expanded fossil fuel projects, it flies in the face of the bank’s own climate commitments.”