The towels had been freshly laid out, the turquoise waters glistened and a spicy margarita awaited when Rich Handler’s phone buzzed in Turks and Caicos.

A flustered executive back at Jefferies Financial Group was interrupting the CEO’s vacation to discuss the messy unravelling of a client – Bill Hwang’s Archegos Capital. Handler said he was going to fetch his cocktail and that when he got back he wanted the Archegos positions gone and to be told the tally of the losses. 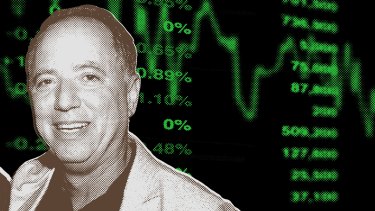 Rich Handler was appointed Jefferies Financial Group CEO when he was 39 and has now spent 21 years in the job.Credit:Bloomberg

“I spent the entire weekend thinking I’m an absolute incompetent idiot,” Handler said of the time spent stewing over the roughly $US30 million ($41 million) hit in March. “But then we saw the headlines that started coming out Sunday night, I realised maybe we weren’t complete imbeciles.” Archegos extracted a steep toll from a handful of banks, wiping away more than $US10 billion.

Not only did Jefferies sidestep that fiasco, the investment bank is having its best year yet. The stock is up 58 per cent in 2021, outperforming bigger rivals such as Goldman Sachs, Morgan Stanley and JPMorgan Chase & Co.

The soaring stock has vaulted Handler, one of banking’s longest-serving bosses, into an exclusive club as a newly minted billionaire. On Wall Street these days, such extreme riches are mostly found in buyout firms and hedge funds – not the executive track of a publicly traded bank. Rare exceptions include JPMorgan’s Jamie Dimon, who spent more than 15 years building the largest and most profitable US lender.

The 60-year-old Handler has charted his own colourful way, bringing the world along to see the good, the odd and everything in between. There are his frequent philosophical missives to staff and clients, his offbeat Instagrams and that video of him posing-and-pouting a la Selena Gomez.

Take his recent Insta post: It shows Handler’s view as he descends onto the helipad of a client’s superyacht, then cuts to him bobbing gleefully on a trampoline for a boutique workout, surrounded by the sparkling waters of the Atlantic. (His post expired, but the fitness studio posted an edited version.)

“I just looked at that and laughed. I said in my head ‘That’s Rich,‘” said Tilman Fertitta, who hosted Handler that weekend on his yacht, anchored off the Bahamas. “Just because you are a banker, doesn’t mean you have to be stiff.”

Fertitta’s empire spans casinos, restaurants and ownership of the Houston Rockets, and the yacht was the setting to plot another deal. He calls Handler one of his closest friends and credits the banker with building a “juggernaut” that can go toe-to-toe with more established rivals.

“When we’re sitting around at night and talking and I think Rich is getting too big for his britches just because he’s worth a billion dollars now, I pull out my financial statements and put him back in his place,” Fertitta said with a chuckle. 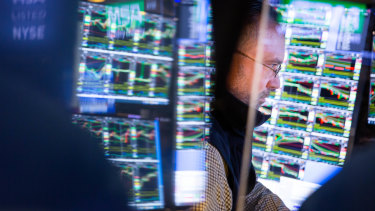 Jefferies stock is up 58 per cent in 2021, outperforming bigger rivals such as Goldman Sachs, Morgan Stanley and JPMorgan Chase & Co.Credit:Bloomberg

Early in his career, the New Jersey native became one of Michael Milken’s most devoted disciples. After the junk-bond king’s empire collapsed, Handler rebuffed big banks guaranteeing lucrative paychecks and instead jumped to New York-based Jefferies.

The lure: Handler could keep a portion of the profits from his group. He’s parlayed that deal into building up more than 7 per cent ownership of Jefferies’ stock over three decades. That’s now the biggest chunk of his fortune. Top that up with cash bonuses, real estate-interests and private partnership stakes, and his wealth now exceeds $US1 billion, according to the Bloomberg Billionaires Index.

Clad in his typical polo shirt and khakis and with an Eli Manning bobblehead nodding along on his desk, Handler ticks off wins and grievances. He offers a vigorous defence when reminded how Jefferies has long been ignored or treated as a nuisance by larger competitors.

“We’ve constantly been the firm that they wish would disappear,” Handler said. “I’d love for them to keep saying we’ll never be them. In their minds we are firm No. 497. Keep underestimating us, keep being pejorative. We’ll keep performing for our clients.”

Some numbers he holds dear: The jump in advisory and capital-markets revenue from $US90 million when he took over to $US4 billion now. Another: About 69 per cent of its banking business is repeat revenue – proof that it can build lasting ties.

“If I texted Rich Handler and if he doesn’t call me back in 10 minutes, I’ll be floored,” said Doug Cifu, the CEO of Virtu Financial. Challenged to prove it, he taps out a “Call me” text to Handler, who rings 30 seconds later. Cifu tells him it was just a test and “you can get back to work.”

Handler doesn’t tire of casting himself as a regular guy from Jersey and takes umbrage to the notion that he’s a merchant of high finance.

He gets wide-eyed talking about the lasagna Bruce Springsteen once served when he was invited to The Boss’s place. The two photos on his desk? One with his family and another with Springsteen. And then there’s the signed guitar from the singer that says “from one New Jersey guy to another.”

A ticked-off building manager in Jefferies’s old Connecticut office once sent a note to all the tenants asking them to stop wearing flip-flops and shorts around the office. Handler was the guilty party.

But he’s hardly bashful of his burgeoning wealth.

“I pay a boatload of taxes. Audit me 27 times. Every time they audit me, I get money back,” Handler said. “I wish my accountants weren’t so conservative.”

He points to his firm’s charity record and the role it plays in helping companies grow and hire more people. It’s reminiscent of the lines preached by Milken in the 1980s.

Rival firms relish in pointing out that Jefferies wades into risky deals that others might spurn. The flip side of that reputation is that when premier companies need help, Jefferies is less likely to be their first call. Those prejudices make Handler bristle.

“When our same people were at our competing firms, they were ‘prestigious investment bankers doing quality deals,‘” Handler said. “Somehow when they walk through our doors, they became scrappy.”

The edge in Handler’s tone has been sculpted over 30 years as he’s cajoled sceptics to take Jefferies more seriously. Given his all-consuming style, it’s easy to see how everything involving the firm is personal for Handler.

Now, the risk for Jefferies is what’s proved to be its biggest edge through the pandemic: How does a pure-play investment bank sustain growth once the boom times roll off?

His approach means nudging clients along to his trampoline class or a karaoke session, or that one time when Handler brought his mother along to a business event in Florida because she lived there.

The first thing you need to know is “you never leave a Jewish mother behind,” Virtu’s Cifu said. But “there’s not another CEO on Wall Street that would have brought his mother to the event being hosted by an important client.”

Where Jefferies has made some of its most visible gains is in banking the so-called middle market. When regulators ratcheted up pressure on big banks to ease off on highly leveraged financing to companies, Jefferies gained market share and has kept it.

There have been harrowing moments: While memories of investment banks collapsing in 2008 were still fresh, credit ratings firm Egan Jones questioned whether Jefferies was overleveraged, alarming the stock market. Handler – who still fumes about the episode – turned around and merged Jefferies with investing conglomerate Leucadia National., which had holdings in everything from wineries and beef to real estate, shoring up his capital base. Handler has spent recent years peeling off those non-financial assets. 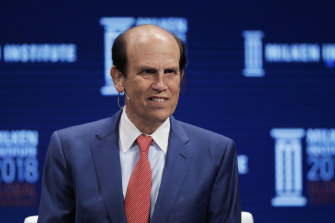 Early in his career, handler was a disciple of junk-bond king Michael Milken.Credit:AP

Now, the risk for Jefferies is what’s proved to be its biggest edge through the pandemic: How does a pure-play investment bank sustain growth once the boom times roll off? It lacks the adjacent divisions of its bigger rivals, like a giant wealth operation, a trillion-dollar asset-management arm or a consumer-facing business. Those less volatile businesses help banking giants keep their profits up when there’s less to do on Wall Street.

Handler casts his firm’s simplicity as an advantage, avoiding the self-destructive infighting that conglomerate banks experience.

“We don’t have a culture where the fixed-income team hates the equities team, and they both hate investment banking,” he said. “With the typical Wall Street dysfunctional culture, when there’s a bad year, there’s a knife fight over the bonus pool. It’s not a one-man show, we have a team that’s worked their butts off.”

But for a man who ascended to the CEO seat when he was 39 and is now in his 21st year there, what about succession? Handoffs can be hard to execute and disruptive. JPMorgan, Morgan Stanley and Bank of America are all on slow paths to testing and grooming eventual successors to their CEOs, who already have spent more than a decade at the top.

Handler points out that he only just turned 60, the age when many bosses first take over.

“If I ever felt I was sticking around too long, people would tell me. I would probably know before they do,” Handler said. “That being said, do I sound like a guy who wants to leave?”