America may be only weeks away from defaulting on its debts, undermining its pivotal position within the global financial system and throwing the US economy and global financial markets into chaos.

When the US hit its legislated debt ceiling on July 31 the Biden administration, unable to issue new debt, was forced to take extraordinary measures to conserve cash. It stopped issuing new debt, ran down its cash reserves, sold investments and suspended payments into some federal government employee retirement funds. 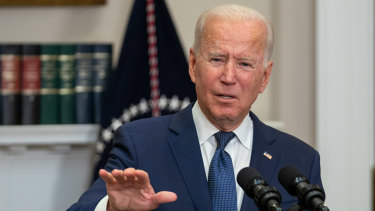 The US running out of cash. Credit:Bloomberg

At the time US Treasury warned that it would exhaust those measures sometime in October or, at the latest, November. On Wednesday, in a letter to Congress, US Treasury Secretary Janet Yellen warned that the most likely outcome is that the government’s cash reserves will be exhausted in October.

Uncertainty about the levels of corporate and individual tax receipts due this month and pandemic-related relief spending meant Treasury was unable to provide a more specific estimate.
Without an increase in the debt ceiling the US would be unable to meet its obligations for the first time in its history, Yellen said.

“We have learned from past debt limit impasses that waiting until the last minute to suspend or increase the debt limit can cause serious harm to business and consumer confidences, raise short-term borrowing costs for taxpayers and negatively impact the credit rating of the United States.

“A delay that calls into question the federal government’s ability to meet all its obligations would likely cause irreparable damage to the US economy and global financial markets,” she said.

In 2011 a similar stand-off between the Republicans and Democrats during the Obama administration, while it was ultimately resolved and a default avoided, resulted in Standard & Poor’s downgrading US government debt, from AAA to AA+, for the first time in history.

There have been other recent bitter and protracted wrangles over the ceiling in 2013 and 2018 that led to non-essential government services being shut down, employees forced to take leave and some federal institutions and national parks being closed.

This time, with 46 of the 50 Republican senators signing a letter last month vowing not to suspend or increase the debt ceiling, the intensely partisan nature of the post-Trump Congress will make it even harder for the Biden administration to negotiate an increase. In the Senate the Democrats would need the support of at least 10 Republicans to raise the debt ceiling.

The Republican position is laden with hypocrisy. The debt ceiling – currently $US28.4 trillion ($38.6 trillion) – applies to spending Congress has already approved and therefore has no relevance to the $US3.5 trillion of social and environmental spending in the administration’s proposed budget or the $US1 trillion infrastructure bill that also has yet to be approved.

Unless something gives – the Democrats have consistently ruled out packaging an increase in the ceiling with the budget measures and using the “budget reconciliation” process and its threshold for approval of a simple majority in the Senate – the US and the world will be on the edge of a precipice.

Most of the spending that pushed US federal government debt through the ceiling actually relates to the Trump administration’s spending.

When he gained office and the Republicans control of Congress, the debt was just under $US20 billion. By the time he left in January this year it was more than $US27 trillion, with his tax cuts and pandemic-related spending the main factors in the increase.

Now the Republicans are demanding structural and institutional reforms to the US government as the price of support for raising the ceiling. They want the Democrats to cut spending on core Democrat programs like Medicare and social security. The ceiling gives them leverage.

Unless something gives – the Democrats have consistently ruled out packaging an increase in the ceiling with the budget measures and using the “budget reconciliation” process and its threshold for approval of a simple majority in the Senate – the US and the world will be on the edge of a precipice.

In 2011 sharemarkets dived and bond yields and interest rates generally spiked at the height of the stand-off. The US Government Accountability Office estimated the wrangling and delays in lifting the limit added $US1.3 billion to the government’s borrowing costs in 2011 alone, with even higher costs in subsequent years. 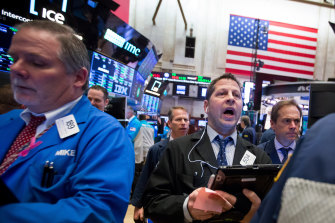 Sharemarkets dived during a similar stand-off in 2011 between the Republicans and Democrats during the Obama administration.Credit:Bloomberg

The existing government debt of $US28.4 trillion already generates almost $US350 billion a year in interest costs in an ultra-low-rate environment. There is a very real cost to the US economy and taxpayer of another protracted stand-off.

A default on the US debt is almost unthinkable – Congress has always found a way to avert that outcome – but can’t be ruled out entirely given how intense and unpredictable politics has become since last year’s US election and Trump’s eviction from the White House.

With the US bond market at the centre of the global financial system – it has been the world’s “safe haven” at any sign of financial stress, provides the benchmarks for global interest rates, the reference rates for almost all financial assets and influences the value of all currencies – the Republicans are risking plunging the US, and the world, into another global financial crisis.

They are playing a highly political game of chicken that could have disastrous consequences. An actual default would do irreparable damage and, in the process, rob America of one of its most valuable and potent assets.

Presumably common sense will ultimately prevail and a default will be avoided. The alternative, a financial and economic apocalypse, should be unthinkable.