After a week-long marathon of calls between world leaders and video conferences featuring dozens of energy ministers, it was the moment the 2020 oil price war finally ended.

From Villahermosa, a city near Mexico’s largest crude terminal, Energy Minister Rocio Nahle raised her voice. “Your Royal Highness, Mexico has already agreed. And now I would like to ask you: ‘Do you agree with these terms?’”

In Riyadh, Saudi Energy Minister Prince Abdulaziz bin Salman nearly chuckled as he looked at a wall of video feeds showing his counterparts around the world. “I go with the consensus. I agree,” he replied.

At that moment, the OPEC+ alliance sealed the largest ever coordinated production cut, removing about a 10th of global supply. The historic deal had almost been derailed by a fight between Saudi Arabia and Mexico’s populist government, forcing President Donald Trump to step in and broker a face-saving solution.

Prince Abdulaziz declared himself sleepless and exhausted, but triumphant nonetheless.

“We have demonstrated that OPEC+ is up, running, and alive,” he told Bloomberg News in an interview minutes after he clinched the agreement. “I’m more than happy.” 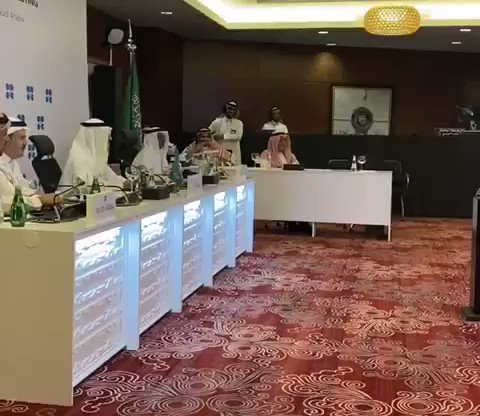 By playing this video you agree to Twitter's use of cookies

For the past month, Saudi Arabia had pumped every possible barrel for sale at rock-bottom prices, punishingRussia for refusing to support deeper OPEC+ output cuts in early March. Now, Moscow and Riyadh will both reduce daily production by millions of barrels, spearheading a global agreement between almost all the world’s major oil producers to rein in output.

But the deal will only dull the pain, not end the crisis.

The market is likely to remain overwhelmed for months to come by the catastrophic collapse in demand caused by the lockdowns designed to slow the spread of the coronavirus through some of the world’s biggest economies.

“The OPEC+ agreement will not prevent sharp inventory builds in coming months, and near-term oil prices in the physical market will likely remain under pressure,” said Martijn Rats, oil analyst at Morgan Stanley.

The deal between the Organization of Petroleum Exporting Countries and its allies will remove nearly 10 million barrels a day from the market through deliberate cuts. In addition, the group is counting involuntary declines in the production of the U.S., Canada, Brazil and several other countries, as companies reduce drilling activity due to low prices and weak demand.

OPEC+ officials, using some creative accounting that also includes output drops in Venezuela, Iran and Libya, which are exempt from making cuts, said that as much as 20 million barrels a day will over time leave the market -- 20% of global production

For the time being, the world will need to be content with the 10 million barrels a day from OPEC+. Yet demand is down by about twice that amount, meaning the world’s oil tanks will keep filling day after day as long as planes stay grounded, businesses shuttered and billions of people remain at home.

Oil traders don’t seem optimistic. By 9 a.m. in London, prices had slipped into negative territory, falling as much as 2.7% to $30.63 a barrel.

The biggest winner appears to be Trump, who refused to deliberately cut American oil production, but was still able to broker the final deal. His phone call with Mexican President Andres Manuel Lopez Obrador, followed by a three-way conference call with Russian President Vladimir Putin and King Salman of Saudi Arabia, came up with the proposal that resolved the Latin American nation’s objections to the agreement.

Trump has taken time away from grappling with the world’s largest coronavirus outbreak and waded into oil politics with a surprising goal. He’s gone from welcoming the crude price collapse to worrying about losing the American energy industry. Fearing that job losses in Texas and other oil-rich states could hurt his re-election prospects, he convinced Putin and the Saudi monarch to end hostilities and make a compromise.

The president sealed the historic deal by offering the Saudis something that exists only on paper. WhenMexico refused a big output reduction, putting the whole agreement in danger, Trump assured OPEC+ that the U.S. would cut its own production on its neighbor’s behalf.

Mexico would remove 100,000 barrels a day, and the U.S. would contribute an additional 300,000 barrels a day, Trump said at the White House. OPEC+ officials and others involved in the talks said those extra barrels simply didn’t exist. The decline in American production would be driven by prices, demand, and capacity in pipelines or tanks, not presidential press conferences.

But ultimately his offer was enough.

Sunday’s agreement ended a period in which the OPEC+ alliance appeared to be dead, with former partners engaged in oil-trade warfare.

It all started on March 6, when Russian Energy Minister Alexander Novak walked out of OPEC’s headquarters in Vienna and told reporters that his country was ready to increase oil production in April. He had just rebuffed Saudi Arabia’s push for his country to cut output by a few hundred thousand barrels a day, to help counter what most saw as a modest demand slowdown due to the coronavirus. In return, the kingdom had rejected his proposal to continue the group’s existing curbs at their current level.

Angered by Russia’s refusal to cut and Novak’s talk of higher production, Saudi Arabia embarked on a shock-and-awe price war. Riyadh offered oil refiners unprecedented discounts for its crude, cutting its official selling prices by the most in more than 30 years. The kingdom also announced it was boosting production to an all-time high above 12 million barrels a day for April, up 25% from February.

When the market opened a few hours later, even the most bearish traders were shocked. The Sunday evening session is typically a sedate affair, mostly covered by traders in Asia, where it’s already Monday morning. But that night, every trader from Geneva to London and Houston was glued to their screens.

When the selling started, benchmark Brent crude plunged more than 30% in seconds -- the biggest one-day drop since the 1990 to 1991 Gulf War.

What followed was the most chaotic month in the oil market’s history, threatening the stability of the petroleum-dependent nations from Nigeria to Iraq and upending the business plans of industry giants likeExxon Mobil Corp. and Royal Dutch Shell Plc.

Without fully realizing it, the Saudis had started a price war at the worst possible time. By early March, the coronavirus outbreak had spread well beyond Wuhan, infecting thousands of people from Iran to the U.S. Around the world, governments copied the lockdowns that China had already tried and tested. Country after country put their economies into deep freeze.

With demand for jet fuel, gasoline and diesel sharply down, refineries cut production and reduced their crude purchases. The physical oil market started to resemble a closing-down sale. In one obscure corner of the U.S., oil even traded at negative prices, with producers paying consumers to take away their barrels.

Brent crude, the North Sea blend used as a global benchmark, had briefly traded above $70 a barrel at the start of the year. On March 30, it plunged to $21.65, the lowest in nearly two decades.

The most prominent victim was the U.S. shale industry. Drillers in Texas and other states had turned America into the world’s largest oil producer, creating millions of jobs. But fracking is an expensive way to pump crude and the industry had piled up tens of billions of dollars in debt.

As Whiting was going bust, thousands of miles in Saudi Arabia engineers at Aramco were busy pushing their oil wells to the limit.

At exactly 11.29 a.m. on March 31, the giant video wall at the company’s operational nerve center flashed total production surpassing 12 million barrels a day for the first time in history. Employees celebrated by snapping pictures, arms raised in triumph, according to photographs seen by Bloomberg News.

The next day Saudi output crept higher, reaching 12.111 million, then 12.171 million, according to other photographs of the control room. Finally, it hit a record of 12.323 million barrels a day -- enough to meet the combined pre-pandemic consumption of Japan, Germany, France, the U.K., Spain and Italy and still have some barrels to spare.

The oil was being loaded onto an armada of tankers in the Persian Gulf and Red Sea, heading for markets that were already drowning in crude.

It was an untenable situation, threatening to fill the world’s oil tanks within a few months and send prices crashing to levels not seen since the 1990s. Trump was already putting pressure on Russia and Saudi Arabia to rebuild their alliance.

“I never thought I’d be saying that maybe we have to have an oil increase, because we do. The price is so low,” Trump said in a Fox News interview. The president, who had made a political career bashing OPEC and advocating for low gasoline prices, was worried the U.S. industry would be “wiped out”.

Saudi Arabia and Russian blamed each other for the crash. Putin accused Saudi Arabia of trying to destroy shale; the Saudis said Moscow had kicked the whole thing off. None of it cut any ice in Washington. 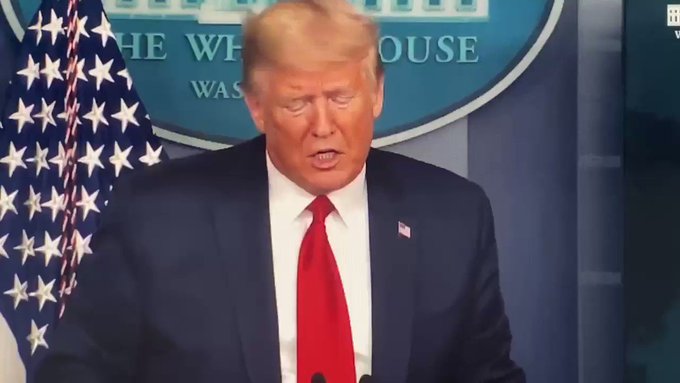 By playing this video you agree to Twitter's use of cookies

“You are waging economic warfare on Texas,” Senator Ted Cruz told the Saudi ambassador in Washington in a private conference call.

Recalling the conversation in a media interview afterward, Cruz said: “Their response is, ‘But Russia. But Russia.’ And I said, ‘But Russia garbage. Russia is our enemy, we know it. They behave like it and we treat them like it. You’re supposed to be our friend. And so don’t screw with us.”

By then, both Saudi Arabia and Russia had little choice but to start talking. With consumption in free fall, it was only a question of time before they were forced to cut output, simply because there would be nowhere to put the oil.

“We see a huge oversupply in the oil market,” said Fatih Birol, the head of the International Energy Agency.

Trump spoke to both Putin and Saudi Crown Prince Mohammed bin Salman, commonly known as MBS, proposing a global deal to cut production. He couldn’t help boasting about the talks before the deal was in place, announcing in a tweet on April 2 that he hoped Riyadh and Moscow would cut output by 10 million barrels a day, if not more.

Brent crude jumped more than 45% in just a few seconds, crushing many bearish investors. Even when the market closed hours later, the benchmark was still up 21% -- the largest one-day increase ever.

Unsurprisingly for a deal that includes dozens of countries in the OPEC+ coalition and the G-20, the final deal is a fudge. Saudi Arabia’s production will only be 1.2 million barrels a day lower than its average level before the price war. Mexico won special treatment and America’s cuts are just an estimate based on forecasts for drilling.

The trajectory of oil prices will be more dependent on how fast the world leaves lockdown and the pace of the economic rebound. Yet the deal’s significance goes beyond numbers.

There has been a tectonic shift in global oil politics. Putin, MBS and Trump, the leaders of the the world’s three largest producers, are dictating global petroleum supply. And America now accepts that low prices aren’t in its interest.

“Trump, who has been a critic of OPEC for years, is the one who put it together,” said Daniel Yergin, the oil historian. “Of all the deals he’s done in his life, this has to be the biggest.”