The troubled super fund for energy workers spent hundreds of thousands of dollars on luxury cars for staff and paid for its former chief executive to attend Stanford University for executive training, adding to the list of lavish expenses that will be questioned in Parliament next week.

EISS Super’s chief executive, chair and three directors resigned last month after The Age and The Sydney Morning Herald revealed the fund bankrolled extravagant staff parties, spent around $75,000 sending one executive to Harvard and sponsored a number of sporting clubs with links to senior management’s families. 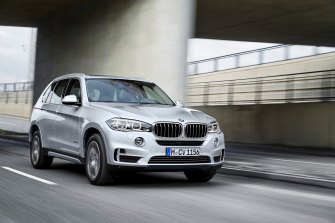 EISS paid for its former chief executive’s BMW X5, adding to the list of expenses that will be questioned by the economics committee next week.

Now, it can be revealed the fund also spent about $150,000 buying former chief executive Alex Hutchison a BMW X5 for his personal and professional use, on top of his base salary of $582,736 paid last financial year.

In addition, EISS spent around $140,000 on two Toyota HiLuxes that had been modified to include canopies, removable flat screen televisions and gas barbecues. Staff were instructed to use the cars while attending community events to promote the fund, but multiple sources have raised doubts about the benefits to members.

“They were supposed to woo people with free sausage sizzles and TV screens with branding,” said one former employee who could not be named because they had signed a non-disclosure agreement. “But I don’t believe they led to one new member signing up.”

The fund spent at least $80,000 sending Mr Hutchison to attend a top US university to complete the Stanford Executive Program, which is branded as a “one-of-a-kind approach to leadership development and personal growth”. The course is advertised as starting at $US78,000 ($107,000) and multiple sources claim EISS also covered his accommodation and travel.

EISS declined to comment, but a spokesman has previously defended all expenses, claiming marketing deals and staff education were subject to rigorous scrutiny and regulatory oversight. The Australian Prudential Regulation Authority (APRA) has sought information from the fund about expenses and hinted regulatory action could follow when questioned by Liberal Senator Andrew Bragg.

EISS was one of 13 super funds that failed APRA’s performance test in August, and must now improve returns, reduce fees or face a ban on accepting new members.

Another industry fund, Maritime Super, also failed the test after years of under-performance amid questionable expenses on union events. Chair Paddy Crumlin sent an email to Maritime Union members in early September discrediting the test, claiming it did not “capture the nuances” of the fund’s investment choices and was part of an “ongoing attack” against the fund.

“This is another cheap political shot at our union, our history, and our future as the leading trade union in this country and internationally,” Mr Crumlin wrote to union members.

Responding to questions on notice sent by Mr Wilson, Maritime Super confirmed there would be no change to board remuneration following its decision to fully outsource investment management to Hostplus. “No, remuneration to directors will not be reduced as the responsibilities of the fund and the board have not changed,” the fund wrote to Mr Wilson.

Since the new laws were introduced, EISS has not signed any new membership deals and confirmed it would not renew its sponsorship of the Wollongong Avicultural Bird Society, which counts Labor MP Sharon Bird as a member. Ms Bird is a patron of the club but has no connection to the fund.