How good? Yields on benchmark US 10-year bonds moved higher to roughly 1.3% after the jobs report on Friday, their highest level since July 23.
Yields have since fallen back a bit. But the addition of 943,000 jobs in the United States is great news for the economy, making it more likely that the Federal Reserve begins to pull back its stimulus earlier than expected.

Continued momentum toward an eventual rate hike could drive yields even higher over the coming months.

“Friday’s [jobs] data put Fed tapering back in the middle of the dinner table, sending US yields and the US Dollar higher,” said Jeffrey Halley, senior market analyst for Asia Pacific at OANDA.

Another move: Gold prices crashed as much as 3.5% on Monday to $1,692.60 per ounce, before making a partial comeback. Silver also dropped.
Some of the strength of that reaction was likely due to thin trading volumes when Asian markets opened on Monday. But the jobs report also played a part, because higher yields make gold less attractive. 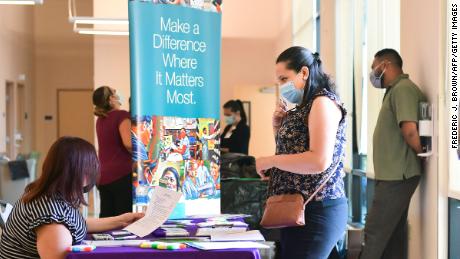 But that’s not the whole story.
While investors are looking ahead to the prospect of the Federal Reserve pulling back stimulus, they must also consider other risks including trade headwinds and the continued spread of the Delta variant.
Over the weekend, trade data showed that export momentum eased in China in July, and could remain under pressure in the coming months.
“China’s shipments are facing near-term headwinds from the recent spread of the coronavirus Delta variant and global supply-chain disruptions,” wrote analysts at Oxford Economics.
Delta is the biggest problem. While the United States is unlikely to return to strict lockdowns that crush growth, the variant is forcing companies across the country to rip up their plans for the rest of the year.
And other countries could respond to Delta outbreaks with measures that take a bigger bite out of economic growth.
“Pandemic nervousness will … temper spirits, particularly in China, where a rapid spread of the Delta variant would be a game-changer for the region’s recovery outlook,” said Halley.
For one concrete example of Delta nervousness, keep reading.

Crude oil prices have marched higher this year, boosting earnings at industry giants including BP, Shell and Exxon.
So it’s not surprise that Saudi Aramco, the massive producer controlled by Saudi Arabia, delivered a bumper second quarter.
But, wow: Aramco’s second quarter profit increased 288% over the same quarter last year to $25.5 billion. Profit for the first half of 2021 was $47.2 billion, roughly double the same period in 2020.
“Our second quarter results reflect a strong rebound in worldwide energy demand and we are heading into the second half of 2021 more resilient and more flexible, as the global recovery gains momentum,” Aramco CEO Amin Nasser said in a statement on Sunday. 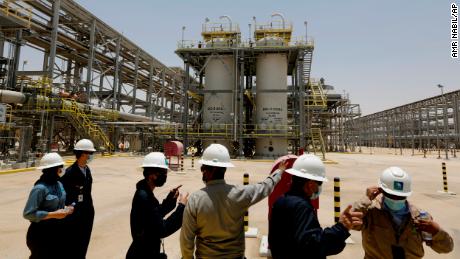 But, wait: Investors remain concerned about the Delta variant and weaker growth in China. On Monday, the price of Brent crude dropped as much as 3.8% before mounting a comeback.
“What are disturbing oil markets the most … is the Delta-variant Covid-19 strain which has vast swathes of the planet in its grip,” said Halley.
“That is increasing fears that the global recovery will stutter and become very uneven, thus reducing oil consumption even as OPEC+ continues to increase production,” he added.

Welcome to the metaverse

Facebook has many pressing problems, from proposed antitrust legislation to accusations that the company is contributing to vaccine misinformation.
But when CEO Mark Zuckerberg joined a recent conference call with analysts to discuss its latest quarterly results, much of the focus was on something far removed from those issues: the metaverse.
How much focus? During the hour-long call, the metaverse was mentioned nearly two dozen times, reports my CNN Business colleague Clare Duffy.
Metaverse primer: The metaverse was originally conceived as the setting for dystopian science fiction novels, where virtual universes provide an escape from crumbling societies. Now, the idea has transformed into a moonshot goal for Silicon Valley, and become a favorite talking point among startups, venture capitalists and tech giants.
The idea is to create a space similar to the internet, but one that users (via digital avatars) can walk around inside of and where they can interact with one another in real time. In theory, you could, for example, sit around a virtual meeting table with colleagues from around the world — instead of staring at their 2D faces on Zoom — and then walk over to a virtual Starbucks to meet up with your mom, who lives across the country.
Zuckerberg has in recent weeks been extolling his vision for turning Facebook into a “metaverse company,” claiming that he began thinking about the concept in middle school. The company recently announced the creation of a new metaverse product group and Zuckerberg said he sees the technology as “the successor to the mobile internet.”
Not just Facebook: Microsoft CEO Satya Nadella said recently that his company is working on building the “enterprise metaverse.” Epic Games announced a $1 billion funding round in April to support its metaverse ambitions, pushing the Fortnite maker’s valuation to nearly $30 billion. And in June, venture capitalist Matthew Ball helped launch an exchange traded fund so people can invest in the metaverse space, including companies like graphics chipmaker Nvidia and gaming platform Roblox.

Earnings from Air Products, BioNTech, Dish Network and Tyson Foods are out before the opening bell. Nutrien follows after the close.