They are, to hear the feds tell it, a Bonnie and Clyde for the crypto age — made-for-TikTok personalities who broke bad, glamorously, right before their followers’ eyes.

She billed herself as “The Crocodile of Wall Street” and “Razzlekhan,” a surrealist artist and rapper with tattooed hands and, she boasted, more pizzazz than Genghis Khan.

He assumed a tamer persona: that of a “tech entrepreneur” and “occasional magician” who’d proposed, in a social media moment, via flashing billboards in Times Square. 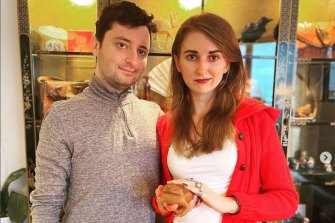 At 7 am on Tuesday in New York, their blingy world of TED talk-style salons and music videos collapsed around them when they were arrested by federal law enforcement officials in New York City and accused of a crime that would’ve seemed preposterous in a halcyon, pre-cryptocurrency era: enriching themselves off a cache of stolen Bitcoin that is today worth about $US4.5 billion ($6.3 billion).

Heather Morgan, 31, and her husband Ilya Lichtenstein, 34, were detained on charges of conspiring to launder 119,754 Bitcoin. The digital currency, the authorities say, came from the 2016 hack of Bitfinex, a cryptocurrency exchange owned and operated by iFinex.

At an initial appearance in a Manhattan federal court on Tuesday evening, Morgan wore a white hooded sweatshirt, her long hair down. Lichtenstein, who goes by the nickname “Dutch,” showed up wearing jeans and a gray shirt. Neither wore shackles nor spoke publicly. Their lawyers — they have retained separate counsel — did the talking. The trial will eventually be held in Washington.

The judge granted both bail, setting a bond of $US3 million for Morgan and asking her parents to post their home as security. For Lichtenstein, the amount was $US5 million. The government initially asked the judge not to allow them to be released on bail. Each is facing the possibility of a 20-year prison sentence, so they have the motivation to run, a prosecutor told the judge.

None of this could have happened 20 years ago. Or 10. Or maybe even five. The couple’s audacious plan, as laid out by federal authorities, as well as the brazen lifestyle that plan supposedly afforded, seemed tailored to these times, and these times alone.

The Department of Justice says that the Bitcoin stolen during the 2016 hack was sent to a digital wallet controlled by Lichtenstein and then to one the couple controlled via a complex laundering scheme. The cryptocurrency was worth $US71 million when it was spirited away in 2016. Now the stash is worth $US4.5 billion as Bitcoin prices have skyrocketed, of which $US3.6 billion worth of tokens has been recovered by federal agents. The couple weren’t accused of doing the actual hacking. 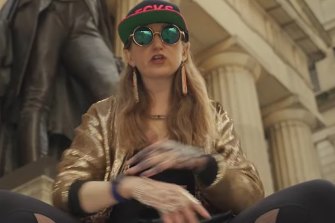 Heather Morgan wrote occasionally for Forbes and released music under the name ‘Razzlekhan’.Credit:YouTube

Until Tuesday, Morgan and Lichtenstein lived lives made for social media. Even Lichtenstein’s 2019 proposal appeared to be aimed at boosting his future wife’s career as Razzlekhan, an artist specialising in collage, sculpture, painting and fashion design. In a Facebook post, Lichtenstein said he planned the marriage proposal around “a weird, creative multi-channel marketing campaign.”

That campaign featured posters and digital ads that “captured the essence of Razzlekhan: surreal, mysterious, creepy and sexy.” He proposed to Morgan as images of her face flashed across a digital billboard.

Morgan, for her part, also dropped singles and music videos on YouTube. In her 2019 song, “Versace Bedouin” — a number she characterised as an “anthem for misfits and weirdos” — she struts across cobbled streets in New York’s financial district and dons a shimmering gold jacket in front of a statue of George Washington.

As the “Crocodile of Wall Street,” she also rapped about investment strategies, calling herself a risk-loving moneymaker who was “sly as a gator.” She was an active TikToker too. In one of her videos, Morgan free-style rapped about investing in the meme stocks often discussed on the “Wall Street Bets” subreddit. 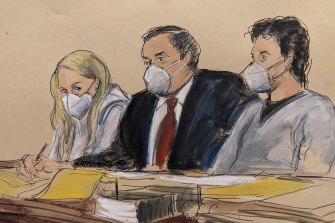 Morgan — who was born in Oregon and grew up in California — has foreign ties, having lived in Hong Kong and Egypt, the prosecutor said on Tuesday. Lichtenstein, a dual Russian and American citizen, moved to the US at age 6, according to his lawyer. He grew up in the suburbs of Chicago and gained US citizenship in 2002.

Tarun Chitra and Ruthie Nachmany, co-founders of the speaker series NYC Salon, on Tuesday recalled meeting Morgan in July 2019. Morgan told them she had just flown in first class from Japan and, over lunch at a French-style bistro downtown, pitched herself as a potential speaker.

“I was actually quite surprised she knew so much about cryptocurrencies,” Chitra recalled.

Morgan’s eventual talk, held at the Williamsburg Hotel, in hipster Brooklyn, was titled, “How to Social Engineer Your Way Into Anything.” She defined social engineering as “the act of manipulating someone into divulging information or taking a particular action.”

She told the crowd that she had sent 10,000 cold emails over the previous decade and had helped 720 companies improve email campaigns. The talk focused mostly on how to crash events, suggesting that would-be crashers bring cash for tips, wear a black T-shirt to appear as if they were security, and also bring layered outfits in case they need to change their look quickly.

Her presentation ended with another slide: “How Can You Socially Engineer Yourself OUT of a Bad Situation?” Above the line was an image of two cuffed hands behind bars.