There are sufficient echoes of the late 1990s in the struggles of China’s Huarong Asset Management to stay afloat to concern the authorities in Beijing and provide some context for their continuing efforts to reduce the excessive leverage in China’s financial system.

Huarong was created in the aftermath of the Asian Financial crisis of 1997 and 1998, which occurred just as China’s economy opened up during the earliest phase of a progressive and still-incomplete deregulation of its financial system. 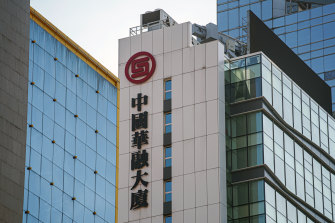 There are rising fears about the financial health of China Huarong Asset Management – a distressed-debt manager controlled by the country’s finance ministry.Credit:Bloomberg

While China dodged the worst of the crisis, largely because it still had stringent capital controls, the initial deregulation of a banking system (that until the 1980s had been confined to three state-owned banks and a network of rural co-operatives) had produced a lot of less than judicious lending to state-owned enterprises.

In the late 1990s China experienced a massive bad debt crisis – there are estimates that more than half of its state-owned enterprises( SOEs) were insolvent in the mid-1990s – with the non-performing loans within the balance sheets of China’s four major banks thought to be between a quarter and a third of their total assets.

The government reacted to the emergence of that destabilising mountain of bad debts by recapitalising the state-owned banks; carving out their non-performing loans and handing them over to four new asset management companies to manage them out of the system over time.

Huarong was one of those asset managers, established to acquire and then manage the bad loans made by the Industrial and Commercial Bank of China.

The Huarong predicament and the context of the swelling tide of SOE-related defaults highlight not just dangerously and system-threatening excessive leverage and poor allocation of capital within the heart of China’s economy but significant, indeed egregious, governance failures.

Now the company set up to manage bad debts is itself apparently teetering on the verge of bankruptcy due to its own non-performing loans and will either be restructured or fail.

While it is not a bank it is a substantial financial institution, with about $340 billion of assets and net assets of about $32 billion.

Embarrassingly for the Chinese authorities, although it listed In Hong Kong in 2015, it is a state-controlled enterprise. The Ministry of Finance owns a majority of its shares.

The company got itself into trouble, it seems, by expanding beyond its charter as a manager of banks’ bad debts into quasi banking activities itself; lending to property developers, setting up securities trading businesses and essentially playing in the shadows of the system that the tightly-regulated banks have been forbidden to enter.

It was able to do so because its former chairman, Lai Xiaomin, was by his own admission subjected to absolutely no oversight and was able to treat Huarong as his own plaything.

When he was arrested in 2018 he admitted taking more than $350 million of “bribes” over the previous decade and was found to have about $50 million of cash stashed in an apartment he called “The Supermarket.”

Lai was charged, found guilty of corruption (and bigamy!) and was executed in January.

Huarong’s difficulties provide an insight into what’s been happening in some of the less transparent corners of China’s financial system.

It isn’t a unique case. Last year the chairman of a bank in Shangdong province, and his predecessor, were sentenced to death with a two-year reprieve (if life sentences are any reprieve) for corruption and the Hengfeng Bank had to be bailed out by the state.

It is also occurring with a backdrop of a record flood of defaults by Chinese companies on their bonds.

Last year Chinese companies missed payments on about $US30 billion of domestic and internationally-issued bonds and the rate of defaults has climbed this year, with payments missed on more than $US10 billion of bonds in the first quarter.

Most of the defaults relate to property developments, although there were coal-related delinquencies last year and some of the large Chinese conglomerates, like HNA, have had their well-chronicled struggles to stay, technically at least, afloat.

The defaults last year came after the central authorities started to tighten the availability of credit in China’s financial system in an attempt, halted during the pandemic but now resumed, to deleverage their over-leveraged state-owned businesses and the wider system.

That almost guarantees more defaults and failed enterprises, including state-owned enterprises that historically carried either an explicit or implicit government guarantee. 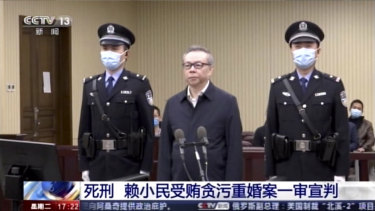 Lai Xiaomin was sentenced to death for taking bribes.Credit:AP

Foreign bond holders attracted to China’s still-developing corporate bond market by the yields on offer relative to those elsewhere are being taught a lesson about risk-adjusted returns as the earlier defaults, combined with the collapse in the value of Huarong’s bonds, spread contagion through the market.

The central government is no longer the lender of last resort for it SOEs or local governments – it is clearly prepared to allow them to fail as part of its larger effort to de-leverage and improve the allocation of capital within the economy.

The inter-connectedness of Huarong with banks, insurers and other financial institutions, however, means it may be seen as having systemic importance and that may play a role in its resolution. If Huarong isn’t able to sort its own troubles out, there is speculation that ownership of the bad loan manager will be transferred – to essentially another bad loan manager.

The fate of the Ministry of Finance’s 61 per cent shareholding and the $US23 billion of bonds it has issued offshore are in the balance.

The Huarong predicament and the context of the swelling tide of SOE-related defaults highlight not just dangerously and system-threatening excessive leverage and poor allocation of capital within the heart of China’s economy but significant, indeed egregious, governance failures.

They also explain why the authorities want to improve the capabilities of their credit ratings agencies, which have tended to slap an investment grade rating on anything state-owned or controlled.

The defaults also point to the gulf between external perceptions (which the authorities are keen to promote) of the rigid control the central government exercises over all aspects of life in China and the reality of substantial dysfunction at the coalfaces of the economy, financial system and local government.

Unlike the 1990s episode, where the concentration of risks within a small number of very large state-owned banks that couldn’t be allowed to fail dictated the state’s strategy for dealing with the avalanche of bad debts, dealing with the latest spate of bad loans within non-bank entities will be more complex.

That’s particularly the case with a group like Huarong, where the regulated sector of the system does appear to have some exposure to its fate.

It will, however, suit the authorities to allow some SOEs to fail, even large ones, to embed the concept of risk within their system and use the lessons learned by foreign investors to effectively enlist them to help improve the risk assessment and risk-pricing of the SOE’s offshore debt.