Macquarie Group chief executive Wikramanayake has declared the profitability of coal will not last and affected communities must be reskilled but warned the transition to renewable energy cannot happen overnight.

More than 40 countries pledged to shift away from coal during the Glasgow climate summit last year, but sanctions following the Kremlin’s invasion of Ukraine have triggered a surge in demand for fossil fuels produced outside Russia. 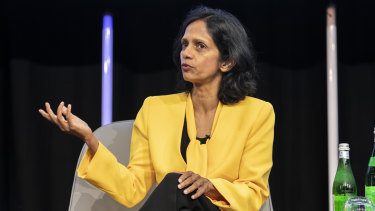 Wikramanayake on Wednesday said the current profitability of coal companies would not last and new opportunities must be created for coal communities, pointing to Macquarie’s efforts to diversify the world’s largest coal port in Newcastle by investing in hydrogen hubs.

“We are accepting the coal industry is running off. It’s very profitable at the moment but it is going to run off,” she said. “So the people of Newcastle, we the people of Australia, need new industry. We need reskilling for jobs.”

Macquarie retains small but shrinking investments in coal but announced last year plans to reduce this to zero by 2024, joining a growing number of financial institutions closing the door on coal.

Speaking at the Association of Superannuation Funds of Australia conference in Sydney on Wednesday, Wikramanayake said the next 10 years were crucial to addressing climate change, and developing decarbonisation solutions required three to six times more capital invested each year.

“Climate change is one of the most critical and complex challenges of our time. When history judges our generations, this will be one of the biggest issues we will be held to account on.”

Wikramanayake said she was optimistic following COP26 but any progress had since been reversed. “Emissions globally had come down a lot in COVID and we were feeling like there was good momentum,” she said. “But now, fast-forward six months on, and we are back again. It’s surged to peak emissions … We’re back up with emissions not just high but rising very fast.”

Fossil fuels still make up 80 per cent of global energy consumption and Wikramanayake said it was unrealistic for this to change overnight. She said renewables would continue to grow market share but the transition must be done carefully and with respect for all affected communities.

“People need energy and if we end up creating energy scarcity we could end up losing the mandate for the transition,” she said. “We have to be realistic. We can’t get going around and saying shut down all the gas, shut down all the oil.”

She pointed to the Biden administration’s moves to ramp up domestic production of oil and gas following the Russia-Ukraine war to illustrate fossil fuel usage will rise before falling in the long term. “We are going to have a pick-up in fossil fuel energy but it’s also, in parallel, pushing the journey to renewables along.”

Wikramanayake said the global response to climate change had created “tectonic shifts” right through the economy, which would continue to create opportunities for investors who identify the right companies and industries.

Macquarie has invested billions of dollars in the green energy transition since the early 2000s and Wikramanayake called on other investors to follow suit, saying regulatory and technology settings were combining to make “this a good investment area”.

“We’ve been doing this, it just needs to scale up a lot, lot more if we’re going to meet the challenge of sorting this out. I’m a little big of a flag carrier. Get on board.”