The prospect of more tornadoes overnight and into Thursday across the Deep South had forecasters advising residents to take extra precautions after a wave of storms pounded the region throughout the day Wednesday, leaving a trail of splintered trees and damaged buildings.

Scattered severe thunderstorms are expected Thursday for portions of eastern Georgia, through the Carolinas into extreme southeast Virginia, according to the National Weather Service’s Storm Prediction Center. All severe hazards are possible. Other isolated severe storms are possible from southern Ohio into the central Appalachians.

The biggest overnight threat of tornadoes remained over Alabama, according to the weather service, but severe storms and tornadoes were possible from east-central Georgia and northeast across South and North Carolina later in the day Thursday.

“Significant tornadoes, wind damage and large hail will be possible from morning into afternoon,” the center advised late Wednesday. “Severe thunderstorms will also be possible from parts of the eastern Gulf Coast into the southern and central Appalachians.” 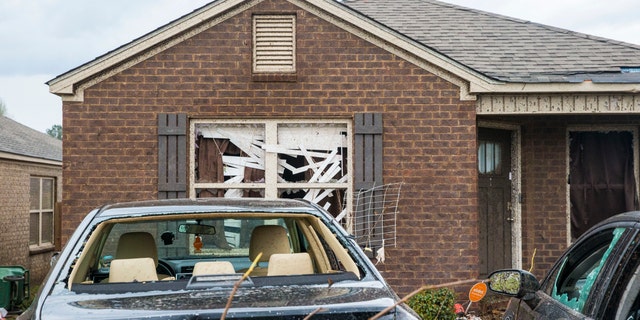 Homes and cars on Waterbury Drive were heavily damaged from severe weather, Wednesday, March 17, 2021, in Moundville, Ala. Possible tornadoes knocked down trees, toppled power lines and damaged homes in rural Chilton County and the Alabama communities of Burnsville and Moundville, where power was out and trees blocked a main highway. (AP Photo/Vasha Hunt)

Early Thursday there were no storm warnings across the metro Atlanta area but intense lightning, heavy rain and strong wind gusts of up to 40-50 mph were moving through the area.

Morehouse College tweeted that it was delaying the opening of its campus until 11 a.m. and that faculty and staff should not arrive until after that time. All classes before then were to be held virtually, it said.

While nearly 16 million people in the Southeast could see powerful storms, the prediction center said, a region of about 3 million stretching from southeastern Arkansas and northeastern Louisiana across Mississippi into Alabama was at high risk for big twisters that stay on the ground for miles, straight winds up to 80 mph (129 kph) and destructive hail. 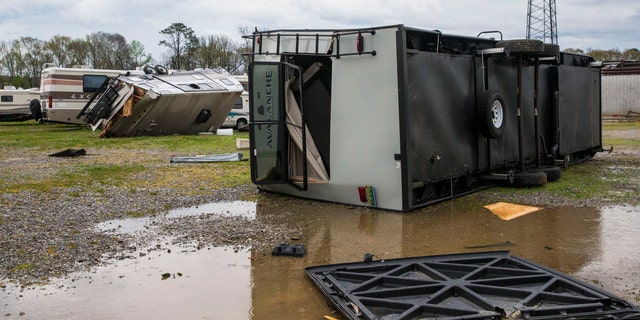 AMU RV service and repair on Old Greensboro Road was struck by a tornado that destroyed multiple client-owned recreational vehicles, Wednesday, March 17, 2021, in Moundville, Ala. The tornado also tore the roof off the workshop with people inside, who survived. A wave of storms is pounding the Deep South, leaving a trail of splintered trees and damaged buildings. And forecasters said still more severe weather was on the way Wednesday with the potential for massive tornadoes, downpours and hail the size of tennis balls. (AP Photo/Vasha Hunt)

In South Carolina, the severe weather threat led the state Senate president to caution senators to state home Thursday while urging staff to work remotely for their safety. House Speaker Jay Lucas said that chamber would meet less than an hour Thursday to take up routine motions in advance of a budget debate next week — then adjourn.

“If you are in a situation where it is perilous that you come, I’m asking you not to come,” Lucas said. “If you can come, give us a quorum and do these few things we need to do, we will be out of here in a hurry.”

Nearly all of South Carolina is under moderate risk of severe storms. The forecast led a number of the state’s school systems to call off in-person classes Thursday and have students and teachers meet online.

Possible tornadoes on Wednesday knocked down trees, toppled power lines and damaged homes in rural Chilton County and the Alabama communities of Burnsville and Moundville, where power was out and trees blocked a main highway. 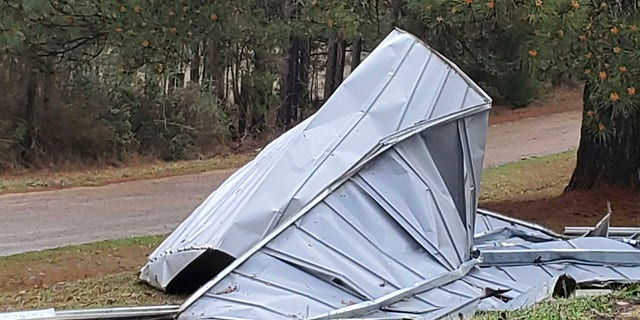 This tin roof was blown off a building by severe winds in the Woolworth community in northeast Lincoln County, Miss., Wednesday, March 17, 2021. Forecasters believe more severe weather is expected Wednesday with the potential for massive tornadoes, downpours and hail the size of tennis balls. (Brett Campbell/The Daily Leader)

WTVM-TV reports that Jimmy Baker, whose home was one of at least three destroyed in Chilton, watched as the storm headed toward his house.

“Then about a minute before it got here, we jumped. . . in the hall closet, a little, small closet,” Baker said. “And just we heard it. You know, the sound from the house coming down. We were saved. We thank the Lord for that,” he said.

“Downtown Moundville got it. Some roofs and stuff got taken off houses,” said Michael Brown, whose family owns Moundville Ace Hardware and Building. “There’s a lot of trees down. I guess it had to be a tornado; it got out of here pretty fast.” 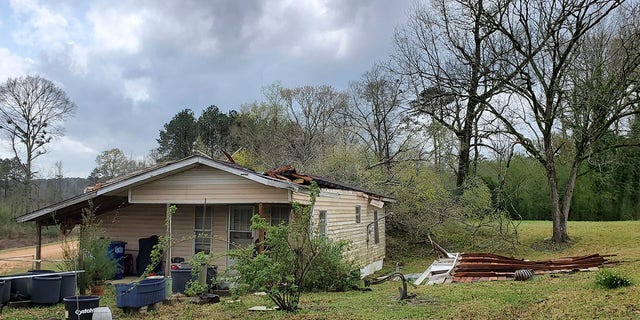 Local residents suspect the roof of this home along Cotten Lane in the Woolworth community in northeast Lincoln County, Miss., might have been destroyed by a tornado Wednesday, March 17, 2021. Forecasters believe more severe weather is expected Wednesday with the potential for massive tornadoes, downpours and hail the size of tennis balls. (Brett Campbell/The Daily Leader)

Additional damage was reported in Louisiana, Tennessee and Mississippi, where video showed an apparent tornado at Brookhaven. High winds blew down signs and trees in northeast Texas, and hailstones the size of baseballs were reported near the Alabama-Mississippi line, the weather service said.

More than 70,000 homes and businesses were without power from Texas to Alabama, and radar showed additional storms moving across the region as initial cleanup work began.

Storms were possible all the way from northern Texas in the west to northern Illinois and as far east as the Carolinas, forecasters said, and the weather service issued more than 50 tornado warnings in Alabama, Arkansas, Texas, Mississippi and Oklahoma. Tornado watches included parts of seven states.

Dozens of school systems in Alabama, Louisiana and Mississippi canceled classes, switched to online learning or dismissed students early, and Mississippi State University moved to virtual teaching because of the potential for danger at its campuses in Starkville and Meridian. 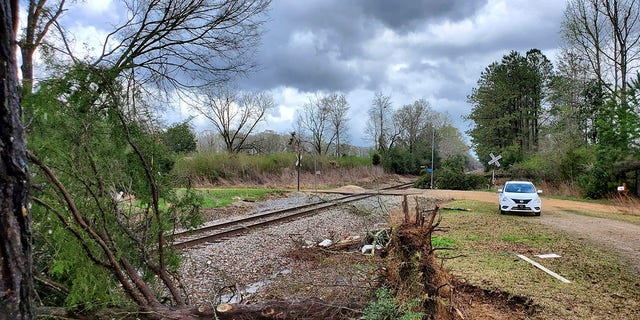 A tree was blown down along side the railroad tracks in northeast Lincoln County, Miss., following a mid morning bout of severe weather, Wednesday, March 17, 2021. Forecasters believe more severe weather is expected Wednesday with the potential for massive tornadoes, downpours and hail the size of tennis balls. (Brett Campbell/The Daily Leader)

Large vaccination clinics where hundreds of people an hour can get shots without leaving their vehicles were canceled in Alabama, Mississippi and Tennessee. In the Mississippi capital of Jackson, state employees were warned to head to stairwells if they hear weather sirens. Near Birmingham, labor organizers canceled an outdoor event at an Amazon facility where workers are voting on union representation.

At least two waves of storms were likely, forecasters said, and the worst might not hit until a cold front passes through overnight.

“The biggest question is how strong to severe these storms are going to be and if they’re going to be tornadic right off the bat,” Gary Goggins, a forecaster with the National Weather Service office for Birmingham, said Wednesday.

Gov. Kay Ivey placed Alabama under a state of emergency, and communities across the South used social media to share the location of tornado shelters. Dozens of people gathered in a gymnasium that was opened as a shelter in Tuscaloosa, where more than 50 people died in a twister during a weather outbreak that occurred 10 years ago next month.

In Jackson, Tennessee, officials said a civic center and the regional airport would be open for residents seeking shelter.