At least two class action specialist firms are investigating a potential shareholder lawsuit over the botched listing of the Macquarie-backed technology company Nuix after three days of damning revelations about its float and corporate governance.

Sydney-based firm Quinn Emanuel and Melbourne’s Phi Finney McDonald are both actively investigating Nuix, with lawyers preparing to build a case around misleading and deceptive conduct or breaches of continuous disclosure obligations.

Nuix shares have more than halved in value since its post float peak and are trading well below the IPO price of $5.31 per share. Investors were told in April revenue forecasts had been cut by around $10 million due to unexpected and significant changes to the business. 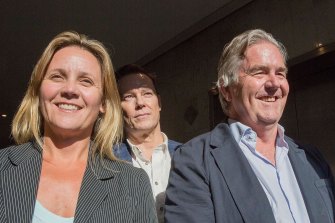 Quinn Emanuel partner Damian Scattini said he had been contacted by “around half a dozen” investors who felt blindsided by the company’s performance, adding Macquarie could also be on the hook for its role in promoting the data analytics firm.

“Follow the money is usually a pretty good rule of thumb,” he said.

Mr Scattini said the prospectus released by Nuix, endorsed by Macquarie which managed the IPO and is a major shareholder, made unrealistic forecasts and may have withheld information about the involvement of key personnel – such as consultant Tony Castagna, who went to prison for money laundering and tax evasion but was later acquitted.

“This is … a shocker,” Mr Scattini said. “The IPO had no reasonable basis for its projections. It was ‘ambitious’ if you want to call it a neutral term. In inverted commas.”

Investors are entitled to rely on the prospectus and expect full and frank disclosure, Mr Scattini said. “The law is quite clear. The prospectus has to put forward the current position and what’s expected, warts and all,” he said. “It just seems to me that this was a puffed up IPO. They’re [investors] blinking in the sunlight saying ‘what happened’?”

Phi Finney McDonald, the firm separately running a lawsuit against Westpac over share price losses during its money laundering scandal, is also actively investigating the claim.

“Obviously there’s been some quite concerning allegations made in some recent [Nine newspapers] reporting,” director Odette McDonald said. “Those allegations go to the operations of the company and its reporting prior to listing.”

The potential for multiple lawsuits against Nuix and Macquarie comes at a crucial juncture for the class action industry. The federal government introduced temporary measures last May to make it harder for shareholder class actions to be successful in an effort to protect companies during COVID-19 while it was difficult to accurately forecast profits.

Quinn Emanuel’s lawsuit would focus on misleading and deceptive conduct related to the prospectus, which was not covered by these changes. However, Ms McDonald said her lawsuit could also allege breaches of continuous disclosure laws in the months after the government’s reprieve was lifted. “We’re not limiting the investigation,” she said.

The government is now considering a bill to extend the protections and make them permanent. However, Ashurst class action specialist Ian Bolster said it was not likely these would be retrospective and would not meaningfully reduce the number of shareholder class actions.

“Basically my view is whilst it may provide some comfort for companies, which is great, it’s not a game-changer,” Mr Bolster said.

Under the proposed bill, class action lawyers must prove directors acted with “knowledge, recklessness or negligence” for the case to be successful. Mr Bolster said this was a “cascading standard” where the burden of proof was still low.

“Negligence is a bit like making a mistake. Given that’s the lowest bar, and you’ve only got to climb that one, there might be some cases knocked back but I don’t think it’s going to scare off too many.”