Perpetual chief executive Rob Adams predicts the elevated inflation levels seen in the US will reach Australia within months and stick around for years, pushing up the price of energy, transport, household items and wages.

Mr Adams said inflation would remain high for “multiple years” following the unprecedented monetary and fiscal stimulus seen around the world to keep economies afloat during the pandemic.

“The depth and breath of pricing pressure is highlighting it’s not going to be transitory, it’s going to be a longer period of inflation,” he warned.

He made his comments after his firm reported a 113 per cent increase in profits to $59.3 million for the December half as its funds under management swelled 15 per cent to $102.8 billion, with 74 per cent of its funds beating their benchmark indices. 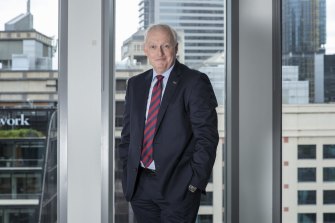 The fund manager declared an interim dividend of $1.12 per share, up 33 per cent, for the six months to December.

Mr Adams said Perpetual would benefit from high inflation because of its value management style, which targets companies with low share prices and strong earnings – unlike growth investors that back expensive stocks that are often yet to turn a profit, such as the technology sector.

Value stocks thrive in times of geopolitical uncertainty and high inflation when over-priced stocks are sold as investors seek to protect their portfolios from volatility. The Perpetual boss predicted Australia would soon see inflation at US levels of 7 per cent, far surpassing the 2 to 3 per cent annual price growth target, which would combine with labour shortages to push up wages.

“Inflationary pressures coming through in a number of ways – supply chain issues, input costs rising across the board, transportation costs rising, container costs rising, cost of energy rising, that’s feeding its way into the households as well.”

The longer-term outlook for inflation “will lead to people questioning the higher [share price] valuations,” he added.

Active stock pickers like Perpetual have faced increasing competition from lower-cost investment products such as exchange-traded funds (ETFs) that track market indices and mirror the indices’ composition in their portfolios.

As global leaders debate sanctions amid the escalating Ukraine conflict, Mr Adams said now is not the time to invest passively.

“We have markets that are hyper-sensitive right now. Any geopolitical unrest will see an exacerbation of that activity. As a minimum, it will be a period of pretty serious volatility for a while.

“In a volatile investment market environment with various inflationary pressures, valuation pressures, geopolitical pressures, I wouldn’t want to be buying the index.” he said. “Because they buy the good, the bad and the ugly and there’s going to be a lot of bad and ugly.”

Citi analyst Nigel Pittaway said the results were slightly ahead of analyst expectations, and the higher-than-expected dividend should be welcomed.

However, he flagged key risks for the company include failure to achieve benefits from the company’s recent acquisitions of US investment firms Barrow-Hanley and Trillium, and difficulty in justifying high funds management fees in a low-return world.

The Business Briefing newsletter delivers major stories, exclusive coverage and expert opinion. Sign up to get it every weekday morning