Even by the extremely volatile standards of the buy now, pay later sector, it has been a wild ride for fintech Zip Co.

At the peak of the hype surrounding BNPL stocks early last year, Zip’s market valuation was briefly higher than some of Australia’s best-known companies, including JB Hi-Fi, AGL Energy and Crown Resorts, despite the fact Zip was burning through cash. 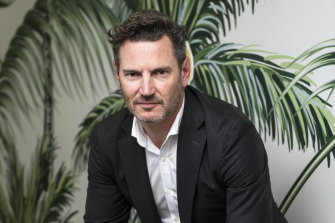 However, as its bad debts increased and the market’s love affair with technology based growth stocks soured, Zip’s lofty valuation crashed about 95 per cent from its highs, forcing the company to rapidly rein in plans for global expansion.

Co-founder Peter Gray admits the extent of the plunge in market conditions and sentiment was surprising. However, after deep cost cuts, restructuring and moves to tighten lending, he maintains the company has done enough to show the market it can ultimately make profits and be sustainable.

“Certainly, reports of our death are greatly exaggerated, but, potentially, the speed of the deterioration of the external environment was a little bit surprising,” Gray says.

“But part of the strength and resilience of the business is the ability to adapt very quickly in a number of ways.”

Some investors appear to be buying into this optimistic story: Zip shares are up almost 160 per cent in the past month, a period in which it also dumped a plan to merge with US-based Sezzle.

The recovery is part of a broader rally in tech stocks. Still, Zip shares, currently changing hands for $1.14 on the Australian Securities Exchange, are down a whopping 84 per cent in the past year.

Even so, Zip’s trading update last month beat some analysts’ expectations for how quickly it was slashing costs – though there remain lingering worries about slowing economic growth in the US and the potential for more bad-debt pain.

Citi analyst Siraj Ahmed, for example, lifted his forecast for cash earnings before tax, depreciation and amortisation (EBTDA) for 2023 and 2024 – the latter year when Zip hopes to move into the black. However, in a sign of the uncertainty still facing Zip, Ahmed added a “high risk” rating to his “neutral” stance on the stock.

BNPL businesses such as Zip and Afterpay provide short-term, interest-free instalment loans to consumers, and are seeking to challenge the might of the global credit card industry. They were market darlings last year, but have since been swamped by a wave of negative forces: high bad debts, growing competition and plunging tech valuations, as rising interest rates cause investors to demand profits sooner from companies that burn through cash.

In response, Zip unleashed a drastic reconfiguration of its business known internally as “Operation Blue Sky.” It promised to slash more than $30 million in employee costs, tighten new lending, halt global expansion plans, and pause proposals to push into new products, such as cryptocurrency trading.

Gray, a finance industry veteran who co-founded Zip in 2013 with chief executive Larry Diamond, says it has been a tough period for the company and affected staff. But, ultimately, the changes are about survival.

As a loss-making company focused on rapid growth, Zip was reliant on raising capital from investors to fund its operations. Gray says that since the market “collapsed in the short term,” it must prove it can make a profit.

“I think it’s very important that we have that as an underlying part of our thinking – we don’t want to rely on capital markets to support our survival,” Gray says.

“We were in the fortunate position where we had sufficient capital to adjust our settings to deliver the outcomes we want without needing to tap the market again.”

Gray concedes Zip did not expect the blowout in bad debts, which have reached 3.8 per cent of accounts in its flagship Australian business.

“I think we’ve acknowledged that bad debts are performing outside our target range,” he says. But he argues the company is dealing with the problem by tightening its lending criteria, which flows through quickly into loan performance because short-term loans roll over quickly.

Despite the recent share price rise, many analysts remain sceptical about Zip’s future. UBS’s Tom Beadle, who has a “sell” rating on its shares, last month said Zip’s credit risks appeared to be worsening – in contrast to the big banks’ consumer-loan portfolios, which are improving.

And even if Zip can curb bad debts and make a profit, its recent changes still raise major questions. For one, when it is slashing its expansion plans so deeply, is it still classed as a growth company?

Gray maintains it can still grow with tighter lending standards, due to the sheer scale of the potential market in the US, where BNPL is far less common than in Australia. “Tempering our risk appetite doesn’t necessarily need to come at the expense of growth,” he says.

He also says there is still “burning ambition” to be a global company, despite announcing it would close its small Singapore business and put operations in Europe and the Middle East under review.

Another massive question still looming over BNPL firms is the entrance of cashed-up giants into the sector: Apple, Commonwealth Bank, Citi and PayPal have all launched or announced plans to enter BNPL.

Some analysts question whether “pure-play” BNPL firms such as Zip can compete against such size, but Gray dismisses the threat from what he calls the “imitators.” He says the entry of larger rivals into the BNPL market has had a “very minimal” impact on Zip, partly because these businesses do not provide the same digital services to merchants as BNPL firms.

The crucial test for Zip will remain whether it can deliver on its hopes of posting positive EBTDA by 2024, against a challenging environment of more subdued consumer spending.

For many investors, and analysts at Macquarie, there remains a chance Zip could be caught up in merger and acquisition activity as the industry consolidates. However, Gray indicates Zip is unlikely to be on the lookout for merger opportunities – for now.

“For the short term, no, we’re pretty laser-focused on our core markets of ANZ and the US, and accelerating that path to profitability. So, it would have to be something extraordinary that fits in with that objective.”