London (CNN Business)After a blockbuster 2020, Netflix’s stock is having a rough year.

What’s happening: Shares soared 67% last year, but are down 1% in 2021. The S&P 500, meanwhile, has rallied 16%.
Subscriber growth has been slowing significantly as more people receive Covid-19 vaccinations and competition among streaming services ramps up. The company has also been rolling out fewer TV shows and movies, the result of lockdown-related production slowdowns. 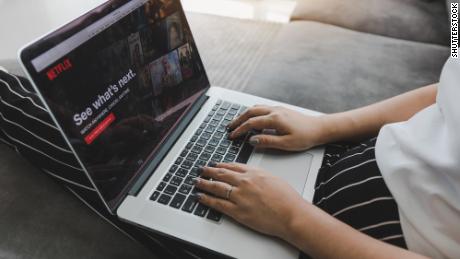 Analysts think that Netflix’s second quarter earnings, due this Tuesday, won’t be an improvement. Comparisons will be tough given that the company added an eye-popping 10 million subscribers during the same period in 2020. Netflix is projecting 1 million new customers this time around.

“The pandemic probably pulled forward some of the demand,” CFRA analyst Tuna Amobi told me.

But Wall Street remains overwhelmingly bullish on the company’s future.
Netflix’s menu of content for the second half of the year should generate lots of attention, according to JPMorgan analyst Doug Anmuth.
“We believe [Netflix] could have its strongest 6-month content slate ever,” he said in a recent note to clients, pointing to the release of new seasons of “Money Heist,” “Sex Education” and “You,” as well as action film “Red Notice” starring Dwayne Johnson (aka The Rock).
Netflix (NFLX) is also taking steps to make its product even more valuable in the eyes of consumers. Last week, Bloomberg reported that the company plans to offer video games on its service within the next year.
Amobi sees this as “a natural progression” for Netflix, even though it’s a difficult market to break into. UBS estimates that the global gaming market is worth about $176 billion.
“[Netflix is] not starting from ground zero,” he said. “They’ve got some properties they can repurpose,” helping to “justify some future price increases.”
The company is exploring fresh sources of revenue as well. Last month, it announced it was launching an online shop that would sell merchandise from popular shows like “Stranger Things” — a nod to the model perfected by competitor Disney, which makes gobs of money off its intellectual property with theme parks, t-shirts and plush toys.
“If you’re an IP provider, you don’t want to leave any money on the table,” Amobi said.

Another billionaire is heading to space

The billionaire space race is heating up again this week as Amazon founder Jeff Bezos prepares to take flight.
Three, two, one: Bezos will be aboard the first crewed flight of the New Shepard, the rocket ship made by his space company, Blue Origin. The flight is scheduled for Tuesday, just 15 days after Bezos handed Amazon’s CEO reins to Andy Jassy.
Bezos will be joined by his brother Mark, Wally Funk, an 82-year-old pilot, and Oliver Daemen, an 18-year old recent high school graduate.
The trip comes after Virgin Galactic founder Richard Branson made it to space last week, a landmark moment for the commercial space industry.
But don’t expect space tourism to be affordable for the masses any time soon.
“If you want to … get the price from $250,000 down to four digits, like an airline, you have to spread [trips] over far more bodies,” Ron Epstein, an aerospace analyst with Bank of America, recently told my CNN Business colleague Chris Isidore.