Neobank Volt will shut down and hand back its licence to the banking regulator after struggling to raise the capital it needed to continue operations.

The digital bank, founded in 2017, said in a statement on Wednesday that it had notified the Australian Prudential Regulation Authority (APRA) of its intention to close its deposit-taking business and return its licence. 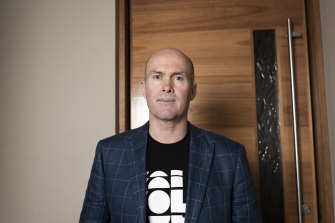 “We have considered all options but ultimately, we have made this call in the best interest of our customers,“: Volt co-founder Steve Weston.Credit:Christopher Pearce

On its website on Wednesday morning, Volt was urging all customers to withdraw their funds from their Volt bank accounts before July 5.

The company said the decision was taken by the board after reviewing recent progress in global capital raising initiatives which were unsuccessful in raising the additional funds it needed to support the business.

“In reaching this difficult decision we have considered all options but ultimately, we have made this call in the best interest of our customers,” Volt chief executive Steve Weston said.

“The entire Volt team is deeply disappointed to have reached this point. We are enormously grateful to everyone who believed in what we were trying to achieve and worked tirelessly to make Volt a success.”

Volt said it has executed a transaction to sell its mortgage portfolio and started returning all deposits to customers in full.

“The company has the necessary liquidity available at hand to facilitate this process,” the statement read.

APRA said on Wednesday morning that Volt intends to return all funds to depositors and “ultimately relinquish its licence to operate as an authorised deposit-taking institution”.

“Volt’s decision to exit the banking industry and pursue other business opportunities is a commercial decision for Volt,” APRA said in a statement.

“As Australia’s financial safety regulator, APRA will closely monitor the process to ensure funds are returned to Volt depositors in an orderly and timely manner.“

Analysts have been questioning the future of Australia’s neobanks as challengers to the traditional players after two of the four startups which received banking licences were effectively put out of action.