“In the face of a significant disruption from COVID19, we saw a need to strengthen the capital structure of the company and we chose a method which was the best available trade-off between speed and certainty and desire to be as fair to our shareholders as we possibly can be,” he said. 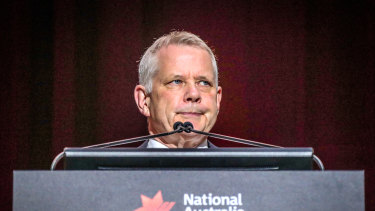 Philip Chronican, NAB chairman: “Companies that do not have a transition path towards 2050 will run the increasing risk of their business models no longer being viable.”Credit:David Gray

NAB undertook a $5.5 billion capital raise in March amid the height of the coronavirus crisis and this helped propel the business bank to become the second-largest in the country, overtaking Westpac with market capitalisation of $77.3 billion.

Vaccine developments and low case numbers had injected optimism into the economy, Mr Chronican said, adding it was unlikely the bank would need to raise further capital, but acknowledged it was hard to make forecasts.

“Our current capital ratio is well in excess of APRA’s minimal requirements but I’m also conscious in this year it’s quite a problematic issue to forecast into the future,” he said.

“In the last 24 hours, we have seen in Sydney how quickly the situation can change,” he said.

The bank’s remuneration report received about 98 per cent shareholder approval, after chief executive Ross McEwan took a 20 per cent pay cut and froze bonus payments to his leadership team.

This was the second consecutive year NAB’s executives did not receive bonuses although Mr Chronican said this was unlikely to continue, citing talent retention concerns.

At the AGM, NAB was questioned on its climate policy including funding for Origin Energy’s shale gas project at Beetaloo Basin in the Northern Territory. It also copped criticism for funding Whitehaven Coal which last week pled guilty to breaching environment laws 19 times.

NAB has committed to phasing out its lending to thermal coal by 2030 and Mr Chronican said the bank would review its oil and gas exposures next year as the lender moves towards a net zero emissions by 2050 target. Mr Chronican reiterated the bank’s commitment to prioritising low carbon energy projects – pointing to its $5.5 billion exposure to renewables, compared to $675 million in thermal coal and $2.7 billion in oil and gas.

“With the way we expect the world to head, companies that do not have a transition path towards 2050 will run the increasing risk of their business models no longer being viable,” he said. “For a bank, that becomes a risky exposure. That’s why we’re taking the comprehensive approach to managing climate risk.”

All directors seeking re-election were approved by more than 98 per cent of shareholders.

Related News:
Business News:
Mauricio Katz & Pedro Peirano Ink With Range Media Partners
Chamath Palihapitiya Invests in Two Deals in One Day During SPAC Boom
Illumination Appoints Vice And Beats Vet Sam Bergen As Head Of Marketing
A LinkedIn exec reveals how to update your profile so recruiters start reaching out to you for new jobs
Look back at how Brexit unfolded
Recent Posts
This website uses cookies to improve your user experience and to provide you with advertisements that are relevant to your interests. By continuing to browse the site you are agreeing to our use of cookies.Ok