The chief executive of the country’s leading stock exchange says changes have been made to improve accountability for senior staff, after the bourse suffered a major trading outage last year and its technology overhaul project was plagued with numerous delays.

ASX chief executive Dominic Stevens said there had been a leadership reshuffle and senior staff would now directly report to him, whereas previously they had reported to the deputy chief executive, in an effort to enforce greater accountability within the organisation.

“We actually are changing the way we manage the business,” Mr Stevens said. “We’re making the spine of what they do within those businesses more accountable to the owners of those businesses, so we make sure that nothing slips through the cracks.” 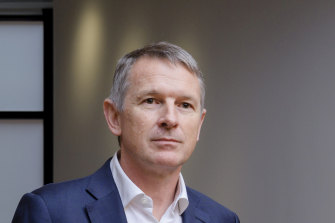 The ASX posted a 3.6 per cent slip in its full-year profits to $480.9 million on Thursday, in line with analyst expectations, and declared shareholders would receive a final dividend of $1.11 per share, 9.2 per cent lower than last year.

The sliding profits were caused by reduced income due to the low-interest rate environment, but also elevated costs related to its ambitious project using blockchain technology to overhaul the 20-year-old trading system, dubbed the CHESS replacement project.

The launch date for the project, which Mr Stevens said would transform operations to “another level of sophistication and efficiency”, was delayed three times last year and is now set to go live in April 2023.

Investors responded positively to the results, pushing ASX’s share price up by 2.43 per cent to close at $83.62 per share, as Mr Stevens told analysts, there would be no further delays in delivering the project and associated costs were close to reaching a peak.

Morningstar analyst Gareth James said investors remained concerned with the lack of clarity around the “revenue upside” of the project, which contributed to a total increase of 8.4 per cent in expenses to $310.3 million for the year.

“The company has put out a number of potential use cases, which all sound very interesting and exciting, but it’s very difficult to quantify that,” Mr James said. “The company’s alluded to potential revenue upside, but it hasn’t been very specific at all.”

Mr Stevens said revenue would come from greater efficiencies and would pave the way for greater innovation and business partnerships. “CHESS has been a great system, it’s been around for a long time, but it can’t be around forever. We’re not going to change prices or charge people more for the fact we have to replace it,” he said. “But what this is, is creating a platform for the future.”

The Australian Securities and Investments Commission launched an investigation into the ASX’s full-day outage last November, that angered brokers and triggered calls for a class action. Mr Stevens said the regulator would soon disclose if any penalties would be enforced, but stressed lessons had been learnt.

“For the last five years, we have spent a lot of time and effort in reducing outages and incidents by getting rid of older systems,” he said. “But on that day, it wasn’t our best moment, and we’re trying to do whatever we can to make sure that never happens again.”