Magellan portfolio manager Nikki Thomas says McDonald’s, Mastercard and Visa are among her top picks for global stocks that can weather the economic storm of high inflation, as the embattled firm tries to regain investor confidence.

Thomas says the fund has also further reduced what was previously one of its biggest bets – Netflix – after the streaming giant reported shock weakness in subscriber growth earlier this year. 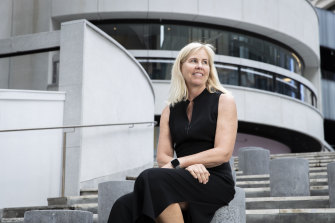 Thomas re-joined Magellan as a senior member of its investment team in February at a time of crisis: former investment chief Hamish Douglass had announced he was taking medical leave, as the business suffered billions of dollars in outflows. She is a key figure in the company’s attempt to turn things around after a bruising year.

Thomas co-manages its flagship global equity fund alongside co-founder Chris Mackay and portfolio manager Arvid Streimann, and how this fund performs is likely to have a major influence on Magellan’s funds under management.

In a video interview from the NSW South Coast, where Thomas works part of the week, she acknowledges it’s been a “difficult” period for Magellan, but says the company is sticking to its guns on investment strategy.

That is, it will continue trying to pick what it hopes are 20 to 40 “unbreakably good businesses” that can deliver high returns, while protecting investors’ capital.

It’s a strategy that has underperformed recently. But with markets being pounded by global recession fears and surging inflation, Thomas says some share prices are starting to look attractive, and points to the example of McDonald’s (a key Magellan position).

McDonald’s is sometimes dubbed “recession-proof by experts,” and Thomas argues it is not only resilient to a downturn, but also insulated from rising food and labour costs, which are mainly worn by franchisees. Yet, McDonald’s still gets to “clip the ticket” as restaurant revenue increases due to rising prices.

“They’re a franchise operator, so they don’t have the big leverage to commodity costs and labour costs because they don’t operate many stores,” she says.

Thomas is also bullish on payments giants Visa and Mastercard (both key Magellan holdings), saying their revenue, charged as a percentage of transactions, will increase as prices rise. “As we spend more because of inflation, they make more money and their costs don’t go up with inflation,” Thomas says.

It has also added exposure to beverages giant Diageo, which owns brands including Guinness and Johnnie Walker, to get “a little bit more exposure to the re-opening story.”

At the same time, Thomas says the fund has been selling down some investment bets, though she adds the fund doesn’t typically make major changes to its overall portfolio.

Perhaps the most notable change has been in Netflix – a stock that’s down more than 60 per cent this year. Previously one of Magellan’s biggest positions, Netflix accounted for 5.3 per cent of the portfolio at December 31, had fallen to 2.9 per cent in March and has further reduced since then.

Thomas says Netflix’s surprisingly weak subscriber growth, the extent of password sharing, and the fact it was considering running advertisements all led to a major change in how Magellan viewed the business and its growth prospects.

“Everyone thought they had about 30 per cent market share still ahead of them to get to a full penetration – actually they were about fully penetrated.”

The fund has also reduced its exposure to Facebook’s owner Meta – its shares are down about 50 per cent so far this year, following poor financial results in February.

And Thomas said in a recent interview with Future Generation, a philanthropic fund manager for which Magellan manages money, that it had decided to sell its stake in Chinese tech giant Alibaba after the investment case “broke.”

Thomas, who grew up in outback Queensland, spent the early years of her career as an analyst before joining Magellan co-founders Hamish Douglass and Chris Mackay when they launched the business in 2007.

She rose to be head of research but left in 2017 following a restructure, and moved to fund manager Alphinity. Thomas says she was not pushed out of Magellan in 2017, but says: “It was a very difficult period for both Hamish and I.”

Thomas says that when Douglass asked her to return to Magellan last summer, it was an opportunity to come back to working on its global fund, which had been her “happy place.”

“You have to go find a happy place if you’re not in one, and he gave me the opportunity for a happy place – to do something that I love doing with really smart individuals.”

Magellan has had a tumultuous year, with its share price tumbling 70 per cent in the last12 months amid underperformance, fund outflows, and the February news Douglass would take medical leave after a period of “intense pressure and focus” on both his personal and professional life.

Earlier this month the company announced Douglass would return as a consultant in October, while its next chief executive in David George, will start in the job next month.

Thomas agrees the central role Douglass previously played at Magellan created “key man risk”, but she is upbeat about his upcoming return, describing it as a “win win”.

Ultimately, however, whether Magellan can turn things around will depend on the performance of its funds.

Morningstar analyst Shaun Ler said in a recent report that with Douglass likely to have a lower profile than previously, other managers, including Thomas, would face pressure to perform. “Investment performance will be the sole focus of investors, and the scrutiny on Chris Mackay, Nikki Thomas and Arvid Streimann to deliver outperformance in the core global equities strategy will intensify,” said Ler, who believes Magellan shares are underpriced.

Latest figures from May show the Magellan global fund is underperforming: returns were minus 4.9 per cent in the last year, compared with a 2.7 per cent gain in the MSCI World index.

With sharemarkets tumbling, the fund has also fallen short in one of its key goals – to protect investors’ money in a downturn. Thomas does no shy away from this, saying that some investments including Netflix did not work out as expected, while the fund has also missed out on the rally in energy stocks.

“It’s a really fair question, a question I think we’re getting asked a lot, and it’s a challenging one because the optics are that this hasn’t done what it said it would do,” she says.

Even so, she says there have been other clients that have backed Magellan during the tough period, and says over the 15 years since its inception the fund has beaten its benchmark.

Magellan’s attempt to turnaround its performance also comes amid at a time of high uncertainty, amid spiralling concerns about inflation, the risk of a global recession, and geopolitical instability.

Speaking about the US and global markets, Thomas says much will hinge on what US companies reveal about their outlook in the upcoming reporting season, and if there big downgrades, there could be more turbulence ahead.

“What companies report and how much they reduce guidance will be very instructive as to where the market goes from here.”